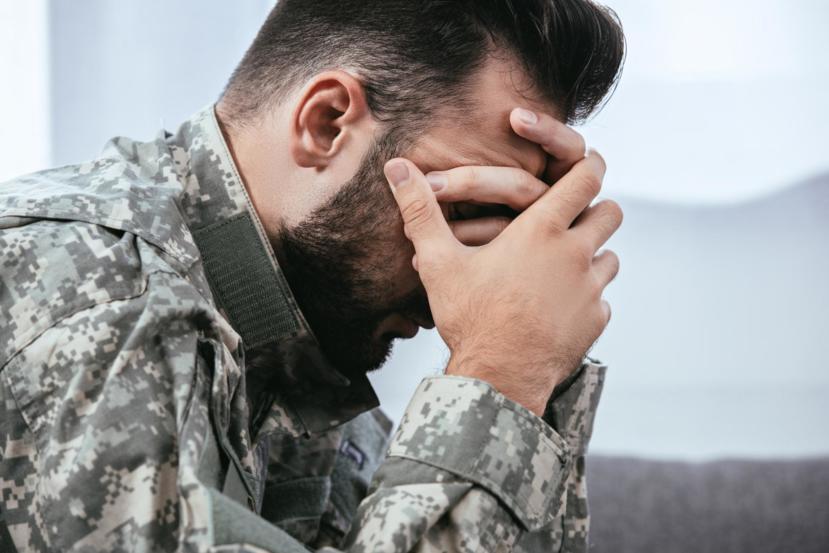 Jim after leaving the air force ten years ago, begins to vividly reenact a chaotic episode that happened in Afghanistan where his and other lives were in jeopardy. He also recently enters a Publix and sees a teller wearing blue and has a panic attack and has to leave the premises. Judy begins to revisit her trauma of seeing her marine corps mates being killed after having to attend to a student who tried to commit suicide that she took on as a helping person because of the student’s dysfunctional family. Two first responders after experiencing continuous traumatic events over years become completely disabled and cannot function in their job. Of the four, only Jim is thriving today but still has moments of difficulty in adjusting.

The other three are all struggling but are trying to overcome their demons. The two first responders were fired from their job for medical reasons and were left with no medical insurance. The marine’s teaching job was not renewed and her insurance ran out recently. She is trying to get the VA to work with her but they are extremely slow to react. Each of these people is suffering from a condition described as post-traumatic stress disorder and for the most part, inadequately dealt with by their employers.

To start with an excellent resource on PTSD is the national center for PTSD which can be found at https://www.ptsd.va.gov/. A good app is PTSD coach that can be found in the App store on the smartphone.

Posttraumatic stress disorder (PTSD) symptoms include the persistent reliving of the trauma, avoidance of any place that is a trauma-reminder, trouble sleeping, and many others. PTSD symptoms can be terrifying and life-altering, as the person tries to avoid any situation that may bring about severe anxiety. This avoidance can make a person's world much smaller and allow them to do fewer and fewer things as they fear the re-emergence of their posttraumatic stress disorder symptoms. They may even turn to drugs to numb the psychological pain caused by their symptoms (Living with PTSD Can Be a Nightmare).

Prior to 1980, symptoms of PTSD were seen as a personal weakness or character flaw and not as an illness. It is now known, however, that posttraumatic stress disorder symptoms are caused by physical changes in the brain and not due to a person's character. If you wonder if you have PTSD, take our free online PTSD test.

Posttraumatic stress disorder is diagnosed using the latest version of the Diagnostic and Statistical Manual of Mental Disorders (Note - Read the DSM-5 updated PTSD criteria for adults and children at PTSD in the DSM-5). In order to receive a PTSD diagnosis, symptoms must meet the following criteria:

While the diagnostic criteria for post-traumatic stress disorder are quite clear, there are additional signs that may suggest PTSD. Signs of PTSD include:

People with PTSD are also at greater risk for:

The signs of PTSD may come and go but if they are impairing daily functioning, they should be assessed and treated as a team by a psychiatrist and mental health professional specializing in PTSD treatment. Those who receive treatment for their PTSD symptoms heal almost twice as quickly as those who don’t.

When you have PTSD, it might feel like you'll never get your life back. But it can be treated. Short-and long-term psychotherapy and medications can work very well. Often, the two kinds of treatment are more effective together. PTSD therapy has three main goals:

Most PTSD therapies fall under the umbrella of cognitive-behavioral therapy (CBT). The idea is to change the thought patterns that are disturbing your life. This might happen through talking about your trauma or concentrating on where your fears come from. Depending on your situation, group, or family therapy might be a good choice for you instead of individual sessions.

Cognitive Processing Therapy (CPT) is a 12-week course of treatment, with weekly sessions of 60-90 minutes. At first, you'll talk about the traumatic event with your therapist and how your thoughts related to it have affected your life. Then you'll write in detail about what happened. This process helps you examine how you think about your trauma and figure out new ways to live with it. For example, maybe you've been blaming yourself for something. Your therapist will help you take into account all the things that were beyond your control, so you can move forward, understanding and accepting that, deep down, it wasn't your fault, despite things you did or didn't do.

If you've been avoiding things that remind you of the traumatic event, Prolonged Exposure Therapy (PE) will help you confront them. It involves eight to 15 sessions, usually 90 minutes each. Early on in treatment, your therapist will teach you breathing techniques to ease your anxiety when you think about what happened. Later, you'll make a list of the things you've been avoiding and learn how to face them, one by one. In another session, you'll recount the traumatic experience to your therapist, then go home and listen to a recording of yourself. Doing this as "homework" over time may help ease your symptoms.

The limited effectiveness of available mainstream medication and psychotherapy treatments of PTSD invites serious consideration of complementary and alternative therapies. Natural supplements used to prevent PTSD (i.e. before or after exposure to trauma) or treat chronic PTSD include dehydroepiandrosterone (DHEA), omega-3 essential fatty acids, and proprietary micro-nutrient formula. Other non-medication approaches that can be used to prevent or treat PTSD include massage, dance/movement therapy, yoga, meditation and mindfulness training, virtual reality exposure therapy (VRET), and EEG biofeedback training. Previously, in an article on sleeping disorders, I mentioned a treatment that helps minimize racing thoughts – EBB therapy. Some PTSD patients have found EBB therapy to be value-added.

Returning to our initial stories, begs the question, while society has gotten better at understanding about PTSD, why are employers so insensitive to the needs of their employees who have or could get PTSD due to their job or come to their current job with PTSD from their previous jobs? Your thoughts are welcomed.

How is bipolar disorder 1 diagnosed in adults?

What music is bad for bipolar disorder?

Will antidepressants help my anxiety?