It was approved by the Food and Drug Administration (FDA) in 1960. Aside from the brand-name medication, the combination of amphetamine and dextroamphetamine was also approved as a generic drug for manufacture and marketing.

Adderall is available in tablets. It also comes in an immediate-release and extended-release formulation, respectively Adderall IR and Adderall XR. Immediate-release is taken when immediate relief from symptoms is necessary. On the other hand, extended-release tablets, as the name suggests, lasts longer in the system of the human body, so its effects also last longer and relief is more long-term. It lasts anywhere from 10 to 12 hours.

It is suitable both for adults and children, with some precaution. Adderall is not suitable for children aged below three years and Adderall XR should not be given to children below the age of six years. Research has shown that prescription for ADHD medications for children has increased from 2002 to 2010 by 25 percent. Adderall is the second most prescribed medication for children with ADHD.

It is also important to note that Adderall is not suitable for, or should be taken with great caution by, people with a history of heart problems as it can increase a person’s risk of high blood pressure, stroke, and other heart diseases. This also applies for people who have or had any of these conditions: hyperthyroidism, anxiety, bipolar disorder, glaucoma and other eye problems, Tourette’s syndrome and other sudden uncontrolled movements, liver disease, renal dysfunction and seizures.

What is Adderall used to treat?

Adderall is used to treat attention deficit hyperactivity disorder, or ADHD, as well as narcolepsy.

ADHD stands for attention deficit and hyperactivity disorder. It is a behavioral condition that affects children and adults alike. However, symptoms typically begin to show in childhood, although it may not be easy to spot and diagnose. Its many symptoms include inattentiveness, hyperactivity and impulsiveness. For adults who have never been diagnosed with ADHD, these problems may sound familiar: having trouble managing time, setting goals, being organized, and keeping a job.

Narcoplepsy, on the other hand, is a disorder characterized by sudden episodes of deep sleep. Such episodes could happen at any time, and often at inappropriate and inconvenient times, even while a person is driving, eating or talking. These episodes could also happen more frequently when the brain is not being stimulated, such as during periods of inactivity or repetitive, monotonous activity.

This condition is more common in teens and adults, aged 15 to 30. There are also cases when the disorder manifests earlier or later in life. However, once symptoms appear, narcolepsy is present for life. Like ADHD, narcolepsy is also difficult to diagnose because daytime sleepiness is the most common symptom and is often associated with other things.

Narcolepsy has four main symptoms: excessive daytime sleepiness, cataplexy, sleep paralysis, and hypnagogic hallucinations. Cataplexy is the sudden and temporary loss of muscle strength. At its most severe, cataplexy can cause a person to collapse on the floor, unable to move, and still be conscious. Next, sleep paralysis is the temporary inability to move while a person is falling asleep or beginning to awaken. Episodes usually last several minutes. The last symptom, hypnagogic hallucinations, create dreamlike images that are seen during consciousness rather than during sleep. This is more common in people with sleep paralysis, and also happens as the person falls asleep or begins to wake up.

In healthy people, there are various sleep stages. Rapid eye movement or REM sleep usually occurs as the third stage of sleep and the body transitions in various stages before the REM cycle begins. However, in people with narcolepsy, the brainwave pattern can skip on some or all of the other sleep stages. This causes the person to rapidly move from wakefulness to REM sleep, and vice versa, waking directly from REM sleep to consciousness.

What is ADHD? Attention Deficit and Hyperactivity Disorder, or commonly known as ADHD, is a term or disorder that is quite familiar to most people, but truly understood by only a few. It manifests as an inability of a person, usually a child, to control behavior due to challenges in processing neural stimuli.

While ADHD is commonly diagnosed in children, it is now widely accepted that ADHD also affects people of any age, from teenagers to adults. As a disorder, ADHD has no cure, but its symptoms can be controlled so that the person can function and go through his or her tasks day to day as normally and with as little disturbance as possible.

Aside from medication, there are also other factors that could contribute to the success or failure of treatment. Some of these factors include dietary intake, genetics, exercise habits, and brain wave activity.

For people who are afflicted with extreme forms of ADHD, pharmaceutical medications may be necessary in order for them to live normally. There are various medications available for ADHD patients. However, doctors typically prefer Adderall as one of their go-to and first-choice options.

Other medications considered for the treatment of ADHD are Ritalin, Vyvanse, Concerta, Dexedrine, Strattera, Intuniv, Focalin, and Daytrana, to name a few. Psychostimulants are not the only option, and some doctors treat ADHD as off-label uses of other medications like antidepressants. 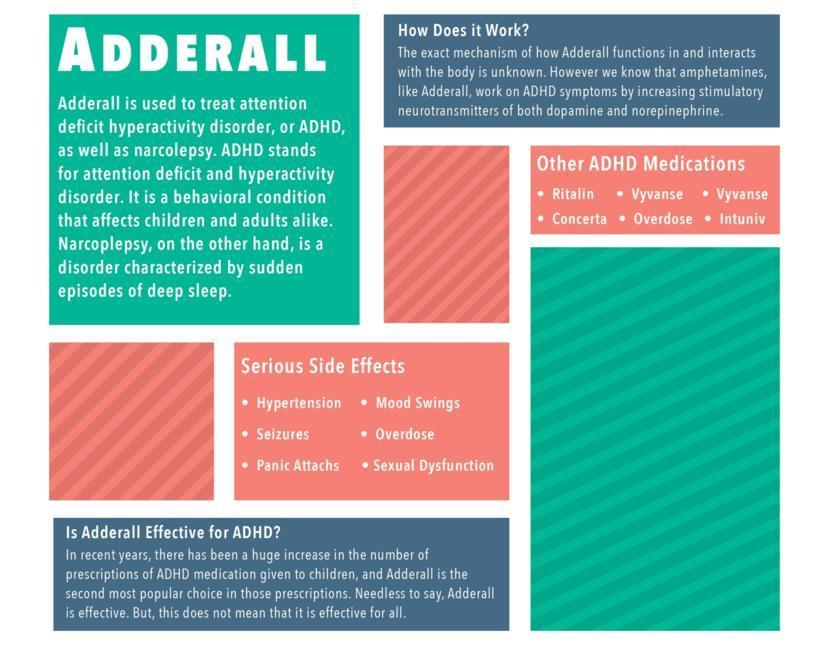 The exact mechanism of how Adderall functions in and interacts with the body is unknown. However we know that amphetamines, like Adderall, work on ADHD symptoms by increasing stimulatory neurotransmitters of both dopamine and norepinephrine. Ironically, this stimulation causes a calming and focusing effect on people with ADHD, reducing their hyperactivity and improving their ability to concentrate on the task at hand.

Is Adderall effective for ADHD?

In recent years, there has been a huge increase in the number of prescriptions of ADHD medication given to children, and Adderall is the second most popular choice in those prescriptions. Needless to say, Adderall is effective. But, this does not mean that it is effective for all. As each person’s physiology and genetics vary, the medication that will benefit him or her most may also be different from the next person.

Most people notice a substantial improvement in their ADHD symptoms after taking Adderall. Most doctors consider Adderall as the first option in treatment plans for patients with obvious ADHD diagnoses and non-addictive personalities.

In a review published in 2002 in Journal of Attention Disorders by Faraone and Biederman, there was a close examination on the effectiveness of Adderall in treating ADHD. The study showed that there was consistency in effectiveness between patients who were given a fixed dose and patients who were given their best dose, calculated depending on their gender and size, medication history, and other factors. This suggests that Adderall has a wider range of flexibility in terms of effective dosage, when compared with other ADHD drugs.

The same study showed that Adderall seems effective in tempering aggressive behavior as much as other ADHD symptoms. This is particularly essential for ADHD patients who display aggressive or violent behavior.

In this study, it was not only physicians who reported improvement in their ADHD patients, but also parents and teachers.

From this information, we can conclude that Adderall is indeed effective in treating and tempering ADHD symptoms in various patients. But because each person is different, this does not guarantee that the medication will be effective for all. The most important thing is to start with a course of treatment and observe its effects. If the doctor prescribes Adderall, then the patient should follow his or her advice. If the treatment doesn’t work, do not lose faith, consult your doctor again so that he or she can adjust or change the medication or treatment plan to find a solution that works for you. 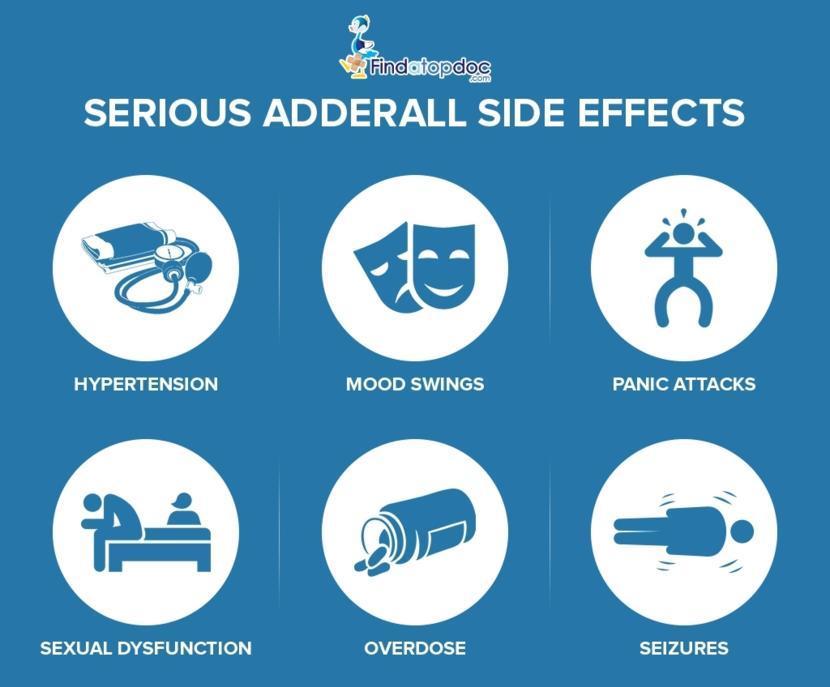 How can I get an Adderall prescription?

To get an Adderall prescription, you must consult a physician first.

In treating ADHD, the first thing you should do is find a psychiatrist that you can rely on. Schedule a consultation and have your child diagnosed. ADHD is not easy to diagnose and requires the studied eye of a physician to correctly recognize the disorder in a patient. It is essential to do this immediately because ADHD often begins in childhood, and if not correctly diagnosed and treated, the condition may affect the child’s development. This would create a ripple effect throughout his or her life.

Even if you are certain that you or your child has ADHD, there are different forms of the disorder. Your doctor will understand your or your child’s symptoms best and only he or she will be able to recommend a treatment plan for you, whether it is Adderall or a different medication, in what dosage, and how frequently the medicine should be taken.

If you have researched the topic thoroughly and strongly feel that Adderall is the right medication for you or your child, do not be afraid to inform your doctor. Discuss your options with him or her. It is important that you feel comfortable with and confident in the treatment plan given to you by your physician.

Remember that despite the wealth of information available online and through your peers, nothing can replace sound medical advice from a licensed professional. Always consider the treatment as a cooperative venture. Your doctor will be unable to give you the right advice if you do not share all of your symptoms and observations. Input from both parties is necessary to improve the chances of the treatment’s success.

Is it a must to stop Adderall while getting anaesthesia?

Do I need to stop taking Adderall before I take anesthesia?

Should I see a psychiatrist for ADHD?

My son is affected by his older brother's behavior....

How do I know if my son has ADHD?

Is the cause of ADHD known?

Is it a must to stop Adderall while getting anaesthesia?