Everyone feels anxious from time to time, but chronic anxiety can adversely impact the quality of your life. While in moderation, anxiety is not a bad thing, but when it becomes intense, it can have serious consequences on your physical health too. Everyone experiences anxiety differently. Some have generalized anxiety that is manageable, but chronic and others suffer from intense anxiety attacks.

What medication is given to kids for anxiety?

Anxiety disorders can be broadly classified into 6 categories:

1) Generalized anxiety disorder (GAD): A person having GAD feels anxious and worried nearly all of the time. These worries and fears are persistent and distract you from your day-to-day activities. You may also be troubled by a constant feeling that something terrible is going to happen, without any acceptable reason. Even minor household chores or delayed appointments can make a person suffering from GAD extremely anxious. Some of the most common symptoms of GAD are feeling restless, insomnia, irritability, upset stomach, difficulty concentrating, and fatigue.

2) Anxiety attacks (Panic disorder): A panic disorder is characterized by repeated, unexpected panic attacks, which are intense and often combined with uncontrollable feelings of anxiety and a range of physical symptoms. It may also be accompanied by agoraphobia, a fear of being in places and situations where help or escape would be difficult. People having agoraphobia are likely to avoid public places, such as shopping malls, or restricted spaces, such as a car. Some of the common symptoms of panic attack are chest pain, shortness of breath, dizziness, and excessive perspiration.

3) Obsessive-compulsive disorder: Obsessive-compulsive disorder (OCD) is characterized by unwanted, recurring thoughts or behaviors that seem impossible to control. Although the person knows that his behavior is irrational and silly, he can’t stop it. The person is troubled by compulsions. For example, a fear of germs and contamination can lead the person to constantly wash hands and clothes. They also suffer from uncontrollable compulsions, such as forgot to turn off the lights or lock the door.

4) Phobia: A phobia is an unrealistic or overstated fear about a particular object, activity, or situation, that in reality, poses very little or no danger at all. There are several types of phobias such as fear of traveling by plane, fear of animals (such as snakes and spiders), fear of water and fear of heights. Phobias are often associated with panic attacks, during which the person experiences intense physical sensations such as choking, pounding heart, nausea, dizziness, faintness, chest pain, perspiration, and hot or cold flashes.

5) Social Anxiety Disorder (Social Phobia): A person having social phobia has a debilitating fear of being criticized, embarrassed, or humiliated in society. For example, certain situations, such as attending a formal function, doing a presentation to work colleagues, eating in public, giving a speech at a wedding, are likely to cause anxiety, both in the lead-up and during the event. Broadly speaking, social phobia may occur in the performance situations, such as being watched while doing something at work or situations involving social interaction, such as making small talk. Performance anxiety is the most common type of social phobia.

6) Post-traumatic stress disorder (PTSD): PTSD is an extreme anxiety disorder that can occur after a person experiences a traumatic or life-threatening event, such as an accident or assault. Some of the common symptoms of PTSD include upsetting flashbacks or dreams of the incident, hypervigilance, difficulty relaxing, social isolation, and avoidance of anything related to the incident.

I am always anxious and have been this way for the... 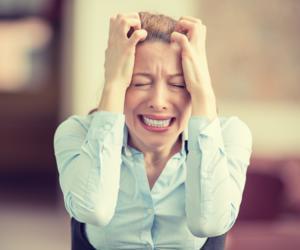 10 Ways to Get Your Anxiety Under Control

My adult son is obese and will not leave the house?

How do I stop overthinking everything?

What are natural methods to treat anxiety disorder?