Swimmer’s ear, or otitis external, is the infection of a person's outer ear. It is caused by an inflammation of the external ear canal that extends from the ear pinna to the ear drum. This type of ear infection commonly occurs due to lingering moisture in the ear, followed by a resulting bacterial or viral infection. Since this condition commonly affects swimmers, it is called swimmer’s ear.

As the name suggests, the main cause for swimmer’s ear is swimming. Swimming is not the only culprit, however. Frequent bathing and other prolonged exposure to water can also cause this type of infection. The outer ear is an optimal place for various organisms to grow when it becomes moist. Swimmer’s ear is usually caused by bacteria commonly found in water and the soil. Infections which are caused by viruses or fungus are less common.

How long does swimmer's ear last?

Scratching your ears, frequent use of headsets, or use of cotton swabs inside the ears can damage the thin skin that lines the outer ear, and this creates a good breeding environment for bacteria and viruses to grow. 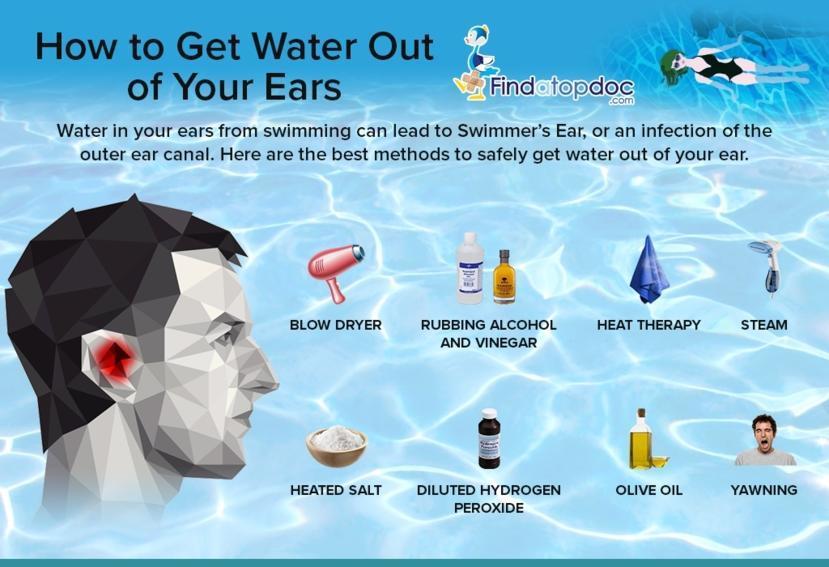 Who is at Risk?

Swimmers are most likely to develop an outer ear infection, especially if they swim in a natural body of water such as a river, a lake, or the ocean. Swimming in chlorinated water may lessen the risk of ear infections in swimmers.

Symptoms of an Outer Ear Infection

Swimmer’s ear symptoms are normally mild initially, but if not treated on time or if the infection spreads, then it can get worse. Doctors tend to classify swimmer’s ear according to mild, moderate, and advanced stages of progression.

The mild stage of swimmer’s ear includes symptoms, such as itching in the ear canal, slight redness inside the ear, mild discomfort that’s made worse by pulling on the outer ear or pushing on the little bump in front of the ear, and drainage of clear, odorless fluid.

The moderate stage of swimmer’s ear includes symptoms such as an intense itching, increase in pain, more extensive redness in the ear, more fluid drainage, discharge of pus, feeling of fullness inside the ear, partial blockage of the ear canal by swelling, fluid or debris, and decreased or muffled hearing.

In comparison to the mild and moderate stages of the swimmer’s ear, the advanced stage has symptoms that are much more severe. This stage’s symptoms include severe pain that may spread to the face, neck. or side of your head, complete blockage of your ear canal, redness or swelling of the outer ear, swelling in the neck’s lymph nodes, and fever and high temperature.

It is important to see your doctor if you are experiencing any symptoms of swimmer’s ear, even if they are only mild stage symptoms.

Doctors are usually able to diagnose if you have swimmer’s ear during an office visit. If you have the advanced stage of this condition or if your symptoms persist, then the doctors may use other methods to evaluate your condition. Initially, though, a doctor is able to diagnose by asking you about your medical history, questions regarding what you are experiencing, and by a physical examination. A doctor’s initial examination usually includes the following:

Infections of the outer ear usually clear up on their own without treatment. However, if the signs and symptoms do not reduce after a few days, antibiotic ear drops may be prescribed to help ease the infection. Clearing your outer ear canal is necessary to help the ear drops flow to all the infected areas.

If you have been prescribed ear drops, it is important that you follow these steps when applying them:

During treatment you should keep your ears dry. Steps to ensure that could include avoiding swimming or scuba diving, avoiding flying, not wearing earplugs or headphones before the pain has stopped, and avoiding getting water in your ears while bathing. Ear infections are typically a mild condition, and therefore they have a very good prognosis.

Can You Prevent Outer Ear Infections?

People whose ears are frequently exposed to water are more likely to develop an outer ear infection. Therefore, keeping the ears dry is the best way to prevent infection.

If you cannot avoid frequent exposure to water, it is recommended to use ear plugs while swimming and dry them thoroughly afterwards. Tilting your head towards the ground often removes excess water quickly and easily.

Do not use cotton swabs to clean your ears, as this could damage them. Instead, use a dry towel to ensure that they remain clean and dry.

If you feel that you have an ear infection, it is crucial that you seek expert advice from a medical professional.

What is the treatment for swimmer's ears?

How is swimmer's ears treated?

More from FindATopDoc on Swimmer's Ear

Can swimmer's ears cause deafness?

How do you get swimmer's ear?

How do you unclog swimmer's ear?

How long does swimmer's ear last?

Can swimmer's ear get worse?