Depending on the person and the type of cells the leukemia is attacking, different signs and symptoms will appear. In the United States alone, there are about 54,000 new cases of leukemia diagnosed every year, and approximately less than 50% of those cases, or about 24,000 people, die from leukemia annually. It is believed that leukemia makes up three percent of the types of cancer in newly diagnosed patients. Thus, leukemia is a fatal disease, but there are treatment plans available, and certain types of leukemia are less fatal than others.

The fatality of leukemia, or its actual prognosis, depends on a few factors, such as the type of leukemia the person has, the age of the patient, and his or her health status. The progression of the disease will also affect prognosis. For example, if the cancer has already spread out and is affecting vital body organs, it will be more fatal. Based on previous cases, elderly people with leukemia have a higher mortality rate compared to children and young adults.

Some types of leukemia, especially for children and young adults, have a high survival rate of at least five years. With continuous advancements in medicine and cancer treatments, the chances of being treated and cured of leukemia grow each day.

As leukemia has a tendency to cause abnormal growth of white blood cells in different parts of the body, including the brain, spleen, liver, digestive system, lymph nodes, testicles, lungs, kidneys, and eyes, the body shows an array of signs and symptoms. Leukemia is divided into stages depending on the type. The factors that decide and affect the fatality of the condition are:

Since 1960, the overall survival rate has quadrupled. Major strides have been made in identifying effective treatment for leukemia. Significant progress is being made by scientists in understanding the underlying cause of the condition. Many people diagnosed with leukemia are living longer and higher quality lives. New and better ways have been discovered and implemented to prevent diagnosis and treat the condition.

Many factors that affect the rate of fatality are:

Hence, the survival rate can improve even further.

Based on the symptoms and facts, there are two major types of leukemia: acute and chronic. These two are further divided into more than 12 types, but there are just four among the lot that are common in children and adults between the ages of 41 and 60. The acute type is fatal, but chronic doesn’t cause immediate harm, as it grows gradually. If left untreated for long, leukemia of any type can alter the production of important cells in the lymphatic system. Without treatment, one of the most common types, acute myeloid leukemia, or ALL, can turn fatal more quickly than others. The reason behind the fatality is the fact that, being acute in nature, this form of leukemia has a tendency to spread quickly to the blood and major organs like the liver and lymph nodes.

The four main types of leukemia are classified based on the progression of the disease as well as the affected blood cells:

Other less common types of leukemia include:

Leukemia manifests differently based on its type and progression. The signs and symptoms of leukemia are directly due to the overwhelming amount of abnormal blood cells compared to the number of healthy cells, which hamper normal blood cell functions. With chronic leukemia, the symptoms may appear after several years, as the disease progresses slowly. With acute leukemia, immediate medical attention is needed, as the symptoms appear rapidly and are far worse.

The prognosis of leukemia is largely based on a five-year survival rate, meaning patients with this diagnosis should survive and live for five years or more after the diagnosis according to their doctor. Leukemia affects the red blood cells, lymphocytes, and platelets. The red blood cells' function is to carry oxygen across the body, the lymphocytes make the immune system strong, and the platelets are responsible for proper clotting of blood. Leukemic cancerous cells can travel through the bloodstream, engulf the bone marrow, and attach to vital organs of the body, making it an extremely dangerous disease.

Every year, an estimated 20,000 people in the United States are diagnosed with acute myeloid leukemia. On a yearly basis, an estimated 10,000 deaths take place because of it. Many receive chemotherapy treatment. Chemotherapy treats with medicines that rapidly kill cancer cells. Roughly 70%–80% of people younger than 60 after induction of chemotherapy will go into remission. In this condition, symptoms of the disease are not experienced and blood cell counts are also normal in range. People older than 60 don’t respond to the treatment and have a higher rate of fatality during it. Some people may go into remission, but they remain in that state. For patients with acute myeloid leukemia, the five-year overall survival rate is 20%, which means an estimated two hundred out of a thousand still live five years even after diagnosis. The five-year survival rate for lower-risk acute myeloid leukemia is 65%.

Factors that affect fatality of patients with acute myeloid leukemia are:

Prognosis is also based on factors such as the outcome and analysis of blood tests, imaging studies, bone marrow biopsies, and cerebrospinal fluid examinations. Some people may show a poor prognosis, but end up living for many more years than what was predicted by the doctor.

CLL’s survival rate is higher than many other cancers; its five-year survival rate is 83%. However, in people over the age of 75, this survival rate drops to less than 70%. The survival and fatality of chronic lymphocytic leukemia depends on a myriad of factors. This disease is more common in men, especially those over the age of 60, and some people have a higher risk of developing it. Race, gender, family history, and other blood disorders also increase the risk of developing chronic lymphocytic leukemia.

Factors that influence these include the stage of the disease, response to treatment, and certain cellular and genetic markers. Great promise has been show with a combination chemotherapy called FCR in patients who were previously treated, were in good health, and have certain favorable cellular markers. This treatment can increase survival and possibly induce a cure. However, this treatment is not suitable for people above age 65, since their kidney function is poor.

Factors that affect fatality include:

There are several different treatments for leukemia. Typically, it is treated through medications and chemotherapy. It is the infection that makes the immune system weak and ultimately kills the person.

Why does doctor only want to monitor child's leukemia?

Are CT scans dangerous for children? 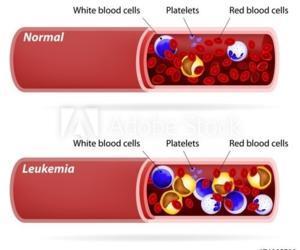 What are the Different Types of Leukemia?

How common is leukemia in children?