I can hear a crackling sound in my knee. What could...

What happens in Osgood-Schlatter disease?

Osgood-Schlatter disease is a painful inflammation involving the upper portion of the tibia or the shinbone, which is just below the patella or the kneecap. This disease can cause localized pain, inflammation and swelling around the affected area. In rare cases, the condition can cause calcification also. There are no genetic factors involved. This condition occurs primarily in the growing stages when the body is still undergoing a number of changes. As one is growing up, the bones, muscles and ligaments are all changing to adapt to the growing needs of the body. Physical activities like athletics, jumping and sports put additional pressure on these growing bones and muscles. This increases the risk of acquiring the disease in young kids. However, this is not only applicable for active kids and can also occur in children who are not so active.

What factors can put you at risk?

Osgood-Schlatter disease is one of the most common causes of knee pain and is seen predominantly in active adolescents and growing children. Often in children and adolescents experiencing growth spurts during puberty, a painful lump can appear just below the kneecap. Other factors that can put you at risk of developing the condition include:

Osgood-Schlatter disease is rarely known to have any associated complications. The discomfort in the knee region along with symptoms like pain and inflammation normally characterize this disease. The pain and discomfort could go on for weeks to months, or it can be a recurrent pain. In most cases, the symptoms subside on their own or with some medical intervention. However, in some cases a bony structure may remain on the shinbone and could last for a long time even as the child grows. The lump or the bony structure however does not interfere in everyday functioning of the knee.

The issue ultimately resolves on its own once the bone growth stops. In general Osgood-Schlatter affects only one knee. But in some occasional cases both the knees could be affected. The pain one experiences due to Osgood-Schlatter disease also varies from individual to individual. Some only experience pain while performing activities while in others it could become a chronic problem with constant and debilitating pain.

The disease bears the name of two doctors, Dr. Robert Osgood (an orthopedic surgeon from the United States) and Dr. Carl Schlattler (a surgeon from Switzerland). Both happened to describe the disease simultaneously.

When should you seek medical intervention?

Medical advice needs to be sought only if the pain interferes and renders the child incapable of carrying out the daily routine activities. Occasionally if there is a swelling or redness around the knee area one should seek medical attention. In some other cases one can also develop fever along with locking or instability of the knee joint, and this also would require medical attention.

Soccer, volleyball, basketball and ballet are all activities which involve a lot of running, jumping and bending. This causes the quadriceps, which are muscles in the thigh, to pull on the tendon which connects the kneecap to the shinbone. Repetition of the activity can cause a lot of stress, and that in turn causes the tendon to pull away from the shinbone thereby resulting in pain and swelling. A bony lump could appear in some cases just below the kneecap as the body tries to bridge that gap with a new bony growth.

Diagnosis of Osgood-Schlatter disease involves taking a thorough history of the individual along with physical examination. Those involved in soccer, basketball, volleyball, gymnastics and ballet are the ones who are more susceptible to the disease. The disease presents itself in the form of anterior knee pain. The knee pain is also reported to increase with activities such as running, jumping, squatting and ascending and descending stairs. Adequate rest and modification of activities help in reducing the pain. X-rays are taken to assess and evaluate the extent of calcification at the patellar tendon.

There is no medication to treat Osgood-Schlatter disease, although conservative treatment can be given for the management of the disease. Activities should be limited, as limiting activities will reduce the stress on the knee and hence help prevent the disease. On the onset of the disease, one should avoid or limit sports such as soccer, basketball, volleyball, gymnastics and high jumping as these would involve a sudden explosive activation of the quadricep muscles. Ice and cold pack compressions can be given along with anti-inflammatories. Elevating the inflamed extremity also helps. Protective padding can also be used. Exercises with a proper stretching routine to strengthen the quadriceps and hamstring muscles should always be done, and this will help arrest the onset of Osgood-Schlatter disease.

Anti-inflammatories and pain relievers can be given to help reduce the pain and inflammation in patients with Osgood-Schlatter disease. Osgood-Schlatter disease when left alone typically goes away over a period of time - sometimes months to years after the normal bone growth stops. A knobby appearance lingers in those previously affected with the disease, even in adulthood. In rare cases where pain continues into adulthood because of the bony fragment, it may call for a surgical removal.

There is very little that you can do to prevent the Osgood-Schlatter disease from occurring. The pain is difficult to deal with, especially for children, and the best way to relieve stress caused by this disease is to follow the R.I.C.E principle:

The R.I.C.E. principle is known to bring about significant relief in patients. Also, before indulging in certain forms of sports or intense activities, it is extremely important to rest the muscles and ligaments to prepare them for the upcoming activity and reduce the risk of injuries.

More from FindATopDoc on Knee Problems 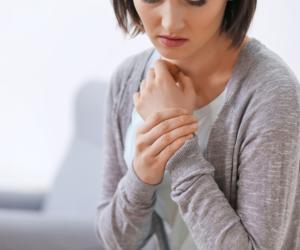 Can Arthritis Be Prevented? 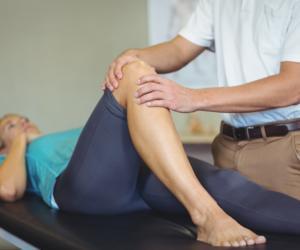 What Is Total Knee Arthroplasty?

My knee grinds when I climb stairs. What can be done?

I can hear a crackling sound in my knee. What could this be?