Shortness of breath is defined as the feeling of inability to breathe normally, hence producing a troublesome sensation. Such breathlessness is a distinct issue in every affected individual. Typically, if in an event of modest labor or any unexpected situation leads to a shortness of breath, it is due to an underlying condition.

It is also known as dyspnea. A person is evaluated on the grounds of some specific signs such as the urgent need for oxygen, tightening of the chest, effect on daily chores, and the intensity of the issue, which causes further agony.

Can shortness of breath during pregnancy be related...

Shortness of breath is commonly caused by conditions of the lungs or heart. Given the underlying condition, the patient is treated accordingly. Breathlessness can either be acute (accompanying other symptoms) or chronic (in case of heart or asthma patients).

The most common causes include:

Shortness of breath can be caused by obstructive or restrictive lung disorders.

In obstructive lung disorders, such as asthma and COPD, airflow resistance is increased, since the airways are narrowed. Since the airways widen during inhalation, air is usually pulled in. But, since the airways constrict during expiration, air cannot be exhaled normally from the lungs; thus, breathing becomes labored and people wheeze. Shortness of breath is then produced when too much air remained in the lungs after expiration.

On the other hand, restrictive lung disorders, like idiopathic pulmonary fibrosis, can cause the lungs to become stiff and require greater effort to expand during inspiration.

A pulmonary embolism, which is a sudden obstruction of an artery of the lung frequently caused by a blood clot, is a less common but more serious cause. It can even lead to a stroke when untreated.

Worsening of the disease is the most common cause in people with a chronic heart or lung disorder. However, these people can also develop another medical condition. For example, people with chronic heart failure might develop pneumonia, or people with chronic asthma may have a heart attack. Hence, the asthmatic person has to always have an inhaler in his proximity. The inhaler helps to alleviate the stress by unblocking the clogged airway.

The heart pumps blood via the lungs. When there is heart failure or the heart is inadequately pumping blood, fluid will accumulate in the lungs, a condition called pulmonary edema. This will then cause shortness of breath that is accompanied by a feeling of heaviness in the chest. Fluid accumulation in the lungs can also narrow the airways and will cause wheezing, a condition known as cardiac asthma.

In some cases, heart failure is accompanied by paroxysmal nocturnal dyspnea, orthopnea, or both. Paroxysmal nocturnal dyspnea is often a sudden terrifying attack of dyspnea when at sleep, while orthopnea is shortness of breath that happens when people are lying down and is improved when sitting up. They usually stand or sit for them to catch their breath. This is an indication that orthopnea is already severe and can be a sign of heart failure. Any of such symptoms calls for immediate medical attention. Keeping a home remedial kit is an elemental need to aid in a state of acute emergency for heart patients.

People with anemia and those who lost a large quantity of blood caused by injury have fewer red blood cells. The red blood cells are the ones that carry oxygen to the tissues; thus the amount of oxygen the blood delivers is decreased. Many people with anemia are relaxed when they sit still. However, they experience shortness of breath during physical activity, since the blood is not able to deliver the oxygen that the body requires. As a result, they breathe deeply and rapidly in an effort to try to raise the amount of oxygen in the blood.

A condition called metabolic acidosis, where a large amount of acid builds up in the blood, may cause one to feel out of breath and start to pant rapidly. Heart failure and anemia can also contribute to shortness of breath in people with kidney failure.

Hyperventilation syndrome causes people to not get enough air; thus they breathe rapidly and heavily. This is usually caused by anxiety and not because of any physical problems.

If a person is experiencing the following signs, then a doctor should be consulted as soon as possible.

Blood tests, chest X-rays, ECGs, Pulmonary Function Tests, and such examinations are done to get an in-depth analysis of the cause. As the symptoms may sometimes be dubious, the doctors may keep the patient in observation for a span of time. After the problem is ranked on the order of severity (tested by Pulse oximetry), the patient is put on painkillers, such as morphine, to relieve the pain and discomfort. Often the use of assisted breathing machines, such as mechanical ventilators, is needed with patients whose oxygen level in the blood is below normal.

Shortness of Breath – When to See a Doctor

Will my heart malformation surgery allow me to have...

What are the viruses that could cause pneumonia?

More from FindATopDoc on Shortness of Breath 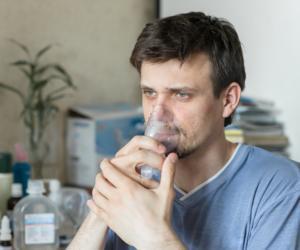 Is Dyspnea (Shortness of Breath) a Warning Sign of...

How to treat breathlessness in a metastatic breast...

What causes sudden shortness of breath?

These Conditions Can Cause Dyspnea

Is Dyspnea (Shortness of Breath) a Warning Sign of a Serious Condition?

Can shortness of breath during pregnancy be related to the heart?