What is a kinesiology tape?

Kinesiology tape is a thin, elastic adhesive tape made from cotton or cotton/nylon blend. The cotton strip is comfortable and hypoallergenic without topics ingredients or medications. Several different brands of tapes are available. The common brand names of kinesiology tapes are KT Tape and Kinesio Tape. The injured area of the body can be stabilized by these tapes. It also helps the body to completely heal without reducing the range of motion. Kinesiology tape is commonly used in knees, calves, elbows, shins, wrist, and shoulders.

Kinesiology tapes are also clinically used to reduce pain, improve posture, relieve swelling, along with an enhanced function and performance in sports and other activities. The tape is waterproof and wearable for 3-5 days when properly applied. The tape is available in a variety of different colors and designs. 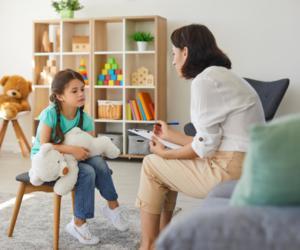 Have a question aboutKinesio Taping Method, And Kinesio Tex Tape?Ask a doctor now

The benefits of the tape depend on its use and application. The key to a successful taping is the proper placement and amount of stretch put through it. You can go to a physical therapist or healthcare professionals who specialize in taping to help you learn. Taping is part of a natural rehabilitation program, but if you have serious injuries, you may need other therapies to completely recover.

The original tape was designed by the Japanese chiropractor and acupuncturist named Dr. Kenzo Kaze in 1979. According to Dr. Kase, the regular athletic tape was very restrictive, which would obstruct the flow of fluid beneath the skin. He said that applying a flexible tape to injured muscles could enhance proper circulation and lymphatic drainage. The vacuum effect of the tape could provide a cooling effect as well as minimizing swelling and further damage.

However, some people are still skeptical about its benefits and consider the tape only as a placebo. After using the tape, others feel that it has some sort of medication that can stimulate the healing process. The tape can support, enable, or restrict the movement of soft tissues. The load can be distributed and moved away from the damaged muscles and tendons. Tissue function can also be augmented with the help of the tape, thereby preventing further injury.

Who can benefit from kinesiology taping?

Acute and chronic pain can be effectively relieved by kinesiology tape without the use of medications or topical substances. It is capable of slightly lifting the skin due to its elasticity. The pressure is immediately reduced on the sensitive pain receptors under the skin. A competitive stimulus is provided by the stimulating effect on pain pathways. Thus, the pain signals going to the brain are blocked. It is especially effective in cases of "hot" injuries, wherein the pain is extreme and out of proportion.

It was explained by Dr. Kase that pain receptors are present between the epidermis and dermis. It would be possible to lift the epidermis slightly up by applying the tape to the painful area. Thus, space is created between the first and the second skin layer. Kinesiology tape is thin, soft, and stretchy similar to the human skin. When compared to other tapes, its thin elasticized fabric allows the skin to easily breathe.

More movement is also possible when kinesiology tape is used since it is less firm and stiff. Using body heat, the material easily bonds with the skin since it is made of unique materials. Moreover, the tape gently tugs to the skin without causing any pain. Thus, blood flow is stimulated in the affected area during physical therapy, throughout the day, and rehabilitation sessions, which promote faster healing.

The removal of fluids can be enhanced by reducing the pressure on the channels of lymphatic drainage. Other materials that collect in that area are also removed. Kinesiology taping is beneficial not only in the case of sports injuries, but also in other inflammatory conditions such as lymphedema and post-surgical recovery.

Kinesiology taping provides a passive lift through the tape's elasticity. This vacuum effect allows lymphatic and venous drainage leading to a reduction in swelling.

3. Speedy Recovery from Contusions and Bruises

Due to bruising, blood is accumulated under the skin. This blood can be removed by kinesiology taping. The tape is applied over the bruised area in a fan pattern and dissipation of the bruising happens through the skin lifting mechanism.

The delivery of oxygen and nutrients is improved due to an enhanced circulation. Thus, nutrients and oxygen are delivered to overused or fatigued muscles, which helps relieve or prevent muscle spasms and cramps.

By-products of exercise are present in overused or fatigued muscles. When kinesiology tape is applied over the affected areas, the removal of these byproducts is enhanced, thereby enabling a speedy and rapid recovery. Through enhanced blood flow, the delivery of oxygen is also improved. Hence, there would be an improved performance in an endurance event, and a complete recovery between high-intensity, repetitive events.

6. Supports Injured Muscles and Joints (without restricting the range of motion)

Kinesiology taping provides support to the injured joints and muscles without limiting the range of motion because of the tape's unique elastic properties.

7. Athletes Can Remain Active Even While Injured

For competitive athletes, remaining active is one of the most important benefits of kinesiology taping. Overstretching or overcontraction of injured muscles can be prevented by applying kinesiology tapes. It also enables the athletes to continue their training while their injury heals. This is attributed to the anti-inflammatory and pain-relieving properties of the kinesiology tape.

Muscles can become weak due to certain neurological or muscular disorders. Support to these muscles is provided by kinesiology taping. Muscle activation is also improved through the application of kinesiology tape. For young children with hypotonia, this benefit is of major use. Kinesiology taping can also be an advantage for children with a limited ability to sit up or crawl due to poor muscle tone. It also assists in mobility and improves one's posture.

In 2016, a study published in the Journal of Bodywork and Movement Therapies showed the effectiveness of kinesiology taping when it comes to relieving low back pain. According to the study, when kinesiology taping is combined with other therapeutic modalities such as physical therapy, a decrease in lower back pain can be achieved. Its findings showed that the range of motion, motor control, and muscular endurance could be improved by kinesiology taping.

Not every study has been able to find this effect on the patients, particularly when kinesiology tape was used alone. However, some studies have proven that kinesiology taping can reduce pain along the spine and lower back when it is combined with exercise and stretching.

11. Recovery from Wrist or Shoulder Injuries

The traditional tape would constrain the muscles and tightly hold them together, which would prevent further injury and movement. However, kinesiology taping works opposite to this. It allows full movement by opening up the muscles.

The kinesiology tape is applied on and around the injury or strain, but do not encircle the muscle or tendon since this will constrain the movement. The skin and connective tissues are moved away from the injured area. Thus, the lymphatic fluid can freely flow, which enables healing of the inflamed tissues. It naturally helps the body heal on its own.

What Does a Pediatrician Do?

5 Things This Cardiologist Wants You to Know About... 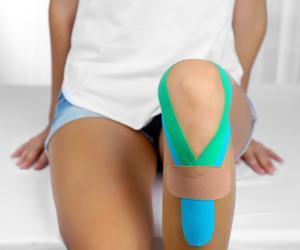 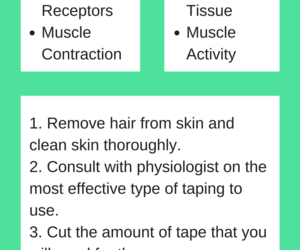 How to Use Kinesiology Tape?

What is Kinesio tape?

What is Kinesio tape?

How to Use Kinesiology Tape?