Will I need surgery if I have Tennis Elbow?

Tennis elbow, also known as lateral epicondylitis, is a condition that causes pain in the elbow, and it mainly results from overusing the elbow. The condition mainly affects tennis players but it can also affect other athletes and sporting enthusiasts. It wears off after a few weeks, but in some cases it can cause persistent pain.

It is easily treated using non-surgical methods such as medication that helps reduce the pain and enhance healing which may be administered through drugs or shots.

The treatment may involve various medical practitioners such as your primary doctor or physical therapists based on the extent of your problem. Under extreme conditions, surgeons are implemented when surgical treatment is required.

Surgery as treatment for Tennis Elbow

Among the various treatment methods available for tennis elbow, surgery is one of them. Surgery is infrequently needed because the condition rarely becomes severe enough that it will require surgical measures.

Surgery is normally considered as an alternative treatment option by doctors only under specific conditions. Such conditions may include the following:

What does the surgical procedure entail?

Surgery can be done in a couple different ways. It may involve the following procedures depending on the kind of problem being addressed:

Surgery can be done through a traditional open surgery method or arthroscopy, or even a combination of the two depending on the preferences of the doctor and the extent of the problem.

The risks of surgery

Just like every operation, this one too comes with its own risks. Examples of such risks are:

Surgical treatment works differently for each individual. In most cases it proves successful. Recovery after a surgery usually takes between 3-6 months. In order to improve the healing process, you can do the following:

Surgery should be considered the final option in treating tennis elbow. You should consult your doctor on other available treatments that might work for you. This is because, non-surgical treatments work well in most occasions and they are better off than surgical methods.

Surgical treatment also poses the risk of causing other problems in addition to the probability that it may not correct the tennis elbow condition. Before this treatment method is undertaken, ensure that you have exhausted all other options.

Read and understand the risks involved and with the help of your doctor, you will be able to create an informed decision about whether or not surgery is right for you.

Is massage good for tennis elbow?

What is the best treatment for tennis elbow?

More from FindATopDoc on Tennis Elbow 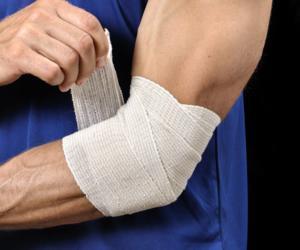 What Are The Signs and Symptoms of Tennis Elbow?

Is massage good for tennis elbow?

Can typing be the cause of tennis elbow?

What is the treatment for tennis elbow?