A cough is described as a sudden explosive exhalation of air. It is basically a body's defense mechanism to protect and clear the airways from inhaled foreign materials. People may also voluntarily or spontaneously cough. Coughs often vary and may be characterized by productive (chesty or wet) or an unproductive (dry) cough. Sputum is expelled by the lungs and is a mixture of saliva, cells, and debris. It may appear green, yellow, or blood-tinged.

Individuals who cough so hard may experience chest pain due to a strain in their rib muscles or cartilages. Pain may be felt while coughing, inhaling, and moving. Coughing can interfere a person's sleep and can also be quite distressing.

Cough for 1 week plus - should I worry?

Have a question aboutAntitussives?Ask a doctor now

An antitussive is also known as a cough suppressant, which is often used for the treatment of cough and cold symptoms. A cough that is caused by a cold or flu may go away on its own. However, antitussives may be taken if a cough is keeping a person awake all night or is causing discomfort. Antitussives can be used in combination with expectorants, so that thick mucus can be made thin. A few examples of antitussive drugs are codeine, dextromethorphan, and butamirate. Some of the brand names available are:

Although the exact mechanism of action of antitussives is unknown, they are thought to act on inhibiting the cough center of the brain and disrupt the cough reflex arc. However, these medications should only be used for irritating and dry coughs without mucus production. It may be dangerous to use antitussives when they are used to suppress productive coughs due to certain lung diseases. Most coughs caused by viruses can be treated by humidification techniques or devices to expose the airways and an increase in fluid intake.

Many antitussives are derived from opioids, and they include codeine, dextromethorphan, and pholcodine. However, codeine may be habit-forming or addictive. It may also cause constipation and drowsiness like pholcodine. Dextromethorphan can increase the levels of serotonin and may interact with other drugs that also increase serotonin levels. Benzonatate is a nonnarcotic cough suppressant that numbs the receptors found in the breathing passages to make coughing less active.

Even though these antitussives tend to be effective in adults, their effectiveness in children has not been established. For this reason, the use of cough suppressants in children is discouraged.

These narcotic agents suppress the cough reflex by acting centrally on the brain. They are medications that are available through prescription. An example would be hydrocodone, which is a semi-synthetic opioid that is synthesized from codeine. This drug blocks the cough reflex and has a strong effect on the brain. It also decreases respiratory drive and drowsiness. However, its chronic use can cause an addiction. Opiate antitussives are often combined with other medications, such as acetaminophen and homatropine to discourage overuse.

Another opiate alkaloid that is naturally occurring is codeine. When it is taken, 10 percent of it gets transformed into morphine. Compared to other opiates, codeine is less addictive.

Dextromethorphan is a non-opiate antitussive medication. This medication has been available over-the-counter since 1958. It is mainly used to temporarily relieve dry coughs, which are caused by infections of the air passages, such as the common cold and sinusitis. However, this drug may also cause unwanted side effects, which include:

Seek immediate medical attention if you experience any of the following symptoms while taking dextromethorphan:

Many people who use antitussives usually do not have any serious side effects. However, if any of the following side effects continue to persist, inform your healthcare provider or pharmacist immediately.

Rare but serious side effects of antitussives:

Before taking antitussives, inform your healthcare provider or pharmacist if you are allergic to any of the medicine's component or if you have any other types of allergies. Antitussives may contain inactive ingredients that can cause certain problems or allergic reactions.

Before taking antitussives, inform your healthcare provider or pharmacist about your medical history, which includes:

Antitussives may also cause mild drowsiness or mild dizziness. Avoid doing anything that requires clear vision and mental alertness, such as driving or operating machinery until you can safely perform these activities. Speak with your doctor if you are currently using marijuana.

Certain cough suppressants might contain aspartame. This is only a concern for patients who have the disorder called phenylketonuria, which is an amino acid problem. Speak with your healthcare provider about the safe use of antitussives.

Antitussives must only be used when clearly needed by pregnant women. These medications may pass into breast milk. Ask your doctor about the benefits and risks of taking antitussives while pregnant or breastfeeding.

coughs that are associated with minor throat and bronchial irritation due to inhaled irritants or the common cold. It also tends to be most effective when treating chronic non-productive coughs.

There are also reports that some of the adverse effects of methotrexate can be reversed by dextromethorphan. Methotrexate is a drug that is used to treat conditions, such as types of arthritis, cancer, or psoriasis.

The most commonly prescribed narcotics are codeine and hydrocodone. Butorphanol and dextromethorphan are the opioid agonist-antagonist non-narcotic antitussives. As an analgesic, butorphanol is the most commonly used, but in dogs, its use has been approved as an antitussive. After oral administration, this drug is well absorbed by the body.

The liver metabolizes this drug and is excreted in the urine. Further use of this drug can also cause respiratory and cardiac depression. A common side effect of this drug is sedation. A semi-synthetic derivation of opium is dextromethorphan.

In the United States and throughout the world, the abuse of over-the-counter antitussives is a very common problem. For decades, there have been cases of abuse and misuse of antitussives in children and adolescents. Antitussives elicit their clinical effect by directly inhibiting the medullary cough center of the brain.

Can cough and cold always be treated with home remedies?

More from FindATopDoc on Antitussives

What is the best cough medicine for 5 year old? 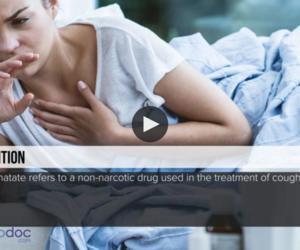 How to stop my daughter's persistent dry cough?

Cough for 1 week plus - should I worry?