Dark stools may indicate bleeding in the digestive system if there are no specific foods or medications causing them.

In most cases, dark stool may be due to the consumption of certain foods or medications. However, sometimes, passing dark stools may also indicate a serious medical condition.

Foods such as black licorice, blueberries, or beets cause dark stool. After eating these foods, the stool becomes black, dark brown, bluish, or reddish in color. The intake of iron supplements and medicine that contains bismuth can also cause stools to become dark brown to black in color. However, dark stools may indicate bleeding in the digestive system if there are no specific foods or medications causing them. Changes in the color and quality of stools also depend on the site of bleeding and how fast the stool moves through the gastrointestinal (GI) tract.

My motions are blackish in color and also very hard....

The medical term used when referring to dark or black stools is melena. When stools contain fresh red blood, it is medically called as hematochezia. If bright red blood is observed in the stool, it can indicate bleeding in the lower digestive tract, particularly the colon (large intestine) or anus. Blood may keep its bright red color because it is less exposed to digestive processes. A red streak or stripe in the stool is often associated with bleeding near the end of the digestive tract and can be seen in people with hemorrhoids.

The most common cause of acute upper GI bleeding is a peptic ulcer. Black, tarry, or dark stools may occur due to the consumption of any of the following foods or medications:

Dark stools may also occur due to:

Aside from the intake of foods that can cause dark stools, other common causes of dark stools include:

A gastric or stomach ulcer is an open and painful sore on the stomach lining that can cause bleeding and melena. Although stress and spicy foods can aggravate existing ulcers, they are not the main causes of stomach ulcers.

Stomach ulcers are usually caused by a bacterial infection. The bacterium that causes this infection is called Helicobacter pylori (H. pylori). To eliminate the infection, antibiotics along with acid reducers are normally prescribed.

Aside from H. pylori infection, the long-term use of pain relievers, such as nonsteroidal anti-inflammatory drugs (NSAIDs) can also irritate the stomach and cause bleeding ulcers. When these drugs are taken for a long time, the stomach lining’s ability to resist stomach acid also weakens. For this reason, adverse effects can be experienced by people with ulcerative colitis and Crohn’s disease when they take NSAIDs.

Common over-the-counter NSAIDs include aspirin, ibuprofen, and naproxen sodium. Other types of NSAIDs can also be prescribed by healthcare providers. Discontinuation of these drugs promote the healing of stomach ulcers.

Gastritis is the erosion, irritation, or inflammation of the stomach lining. This condition is often caused by excessive alcohol consumption, smoking, long-term NSAID use, bacterial infection, or eating spicy food.

Gastritis may be associated with other existing medical conditions or may develop after trauma or post-surgery.

This condition is characterized by a tear in the mucous membrane or inner lining that joins the esophagus and stomach. Mallory-Weiss tears can cause bleeding, which results in melena.

The healing period of most tears without treatment is within 7-10 days. This fairly rare condition may be caused by epileptic convulsions, violent vomiting, and coughing.

Esophageal varices are dilated veins in the wall of the upper stomach or lower esophagus. Bleeding may occur when these enlarged veins rupture. This bleeding results in the presence of blood in the stool or vomit.

Esophageal varices are also one of the serious complications of liver cirrhosis.

The doctor will take your medical history and conduct a physical examination, focusing on your abdomen. The doctor may also ask you the following questions:

The doctor can confirm the presence of blood in the stool by collecting a stool sample, which is then sent to the laboratory for analysis. Other tests may be needed for further evaluation:

Surgery or hospitalization may be required in severe bleeding cases, which cause excessive blood loss.

Seek medical help if dark stools can’t be explained by the use of certain medications or the consumption of specific foods.

Dark stools should be immediately evaluated by your healthcare provider, especially if they are accompanied by other symptoms, such as severe abdominal pain, chest pain, vomiting blood, profuse sweating, rapid heartbeat, dizziness, and altered level of consciousness.

A small amount of blood in the stool may be seen in children, but most cases are not serious. Sometimes, constipation may be the culprit. However, it is still best to inform your child’s pediatrician if you notice this problem.

Passing dark stools due to the consumption of foods and certain medications aren't usually a cause for concern. However, if you frequently have dark stools without taking iron supplements or eating foods that can cause them, contact your healthcare provider as soon as possible.

If dark stools are accompanied by other symptoms, such as acute pain, diarrhea, or vomiting, seek immediate medical attention.

What diet is recommend for a person suffering from...

Why is my stool red?

More from FindATopDoc on Dark stools

I underwent a colon surgery and now I am passing blood... 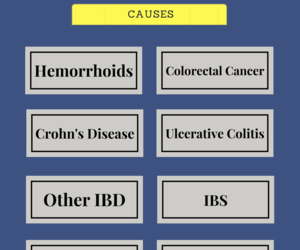 What is Hematochezia: Diagnosis and Symptoms

How long can I expect my results from a stool analysis?

Why is my stool red?

What could be the cause of blood in my stool?