In Bell's palsy, one side of the face tends to droop or becomes very stiff. This medical condition only affects one part of the face at a time. The individual who is suffering from this condition would find it difficult to even smile or close his eyes, especially on the affected side. In most scenarios, Bell’s palsy is a temporary form of paralysis and its symptoms go away within a few weeks’ time. It has been said that the cause of Bell’s palsy could be due to some kind of trauma or impact to the seventh cranial nerve, which is also called as the facial nerve.

What are the symptoms of diarrhea?

There is no known age when this condition can occur. It can occur at any age and to any individual regardless of gender or race. However, studies have shown that Bell’s palsy is commonly seen in individuals in the age bracket of 16 to 60 years old. It has also been noticed that people who have diabetes or are recovering from any type of viral illness are also at an increased risk of developing this condition.

Most people often confuse Bell’s palsy with stroke since they have similar symptoms. However, these two medical conditions are different. Stroke is usually caused by a clot, which hinders the flow of blood to the brain. It can also be caused by a ruptured blood vessel in the brain. Bell’s palsy, on the other hand, is mainly due to facial nerve damage.

The symptoms of Bell's palsy usually start to develop around one to two weeks after the individual has a cold, eye or ear infection. The symptoms just appear all of a sudden. One may not notice it initially after waking up in the morning or while they are eating or drinking.

The most common sign of Bell's palsy is a droopy appearance on one side of the face. Affected individuals would find it difficult to even open their eyes. Although quite rare, Bell's palsy can also affect both sides of the face.

Below are some of the signs and symptoms associated with Bell’s palsy:

The symptoms of drooping or facial weakness tend to reach their peak within a day or two. In such a scenario, seek medical attention or consult a doctor immediately. Do not try to self-diagnose Bell’s palsy since at times, the symptoms of this condition can also be similar to other forms of serious conditions such as brain tumor or stroke. In most cases, people tend to recover after a couple of weeks. It has been reported that most people completely recover within a period of three months. However, in rarest cases, the symptoms tend to worsen or become severe, thereby taking a long time to recover.

Bell's palsy is known to occur when the seventh cranial nerve becomes inflamed, swollen, or compressed. This cranial nerve passes through a narrow and bony area within the skull. When this nerve slightly swells, it tends to push against the hard surface of the skull and affects the function of the nerves. This then results in a temporary facial weakness or paralysis.

Studies are unable to find the exact cause of Bell's palsy, but it is believed that certain types of viral infections can trigger the condition. Below is the list of viruses that have been linked to the development of Bell’s palsy:

Individuals who fall in the following categories are at a higher risk of developing Bell's palsy:

If the eyelid does not close, it is a medical sign that the patient has the "Bell's phenomenon". In this scenario, the individual would be able to roll his eyes upward and outwards in the process of closing them. The doctor would try to rule out the possibility of other medical conditions by carrying out other physical tests.

The doctor may also test the hearing and sense of balance of the individual. Additional tests such as a computed tomography or CT scan, X-ray of the skull, magnetic resonance imaging or MRI may be required. These tests can help confirm the diagnosis and in ruling out other possibilities. Moreover, the doctor is able to predict how fast the recovery can take place.

A test called electromyography or EMG can confirm the presence of nerve damage and also determine the extent of the damage done. In a few instances, blood tests can be carried out. It helps in the diagnosis of other coexisting medical conditions such as certain types of infections or diabetes.

In most cases, the symptoms of Bell’s Palsy improve on their own within a few weeks without the need of any treatment. But one should note that it can take several weeks or even months for the facial muscles to regain their normal strength back again. Below are some of the treatments that can help in the recovery process:

There is no evidence or studies to support a significant amount of benefit or harm from conducting any kind of physical therapy for facial muscles. However, there have been customized facial exercises that intend to help and improve the functioning of the facial muscles.

Remember that Bell's palsy cases can vary from person-to-person. In certain individuals, the muscles would take a longer time to develop or have a hard time to develop movements. For these reasons, the movements should be corrected and well-coordinated with the help of retraining. The muscles that have been holding other muscles captive need to be retrained to allow other primary muscles to work or move properly.

The basic idea of performing these exercises is to slowly recreate the lost brain-to-nerve-to-muscle routine back again. The most important goal of the exercises is to ensure that one does the correct form of voluntary movements and at the same time, mentally focusing on the actions. Over a period of time, these voluntary movements would gradually become automatic and the natural form of movements, as well as the expressions, would be normal as well as automatic without the need to doing it on purpose. Such exercises are slow, but they surely give some amazing benefits.

The prognosis for Bell's palsy patients is very good in general. Recovery from Bell's palsy is completely based on the severity or the extent of nerve damage. Although the improvement would be gradual or slow, it would surely happen. Moreover, the recovery time would vary from person-to-person. With or without treatment, improvements are usually seen within two weeks after the onset of symptoms.

Most of the patients have shown a gradual but complete recovery. They return back to carrying out their normal function just within three to six months after the onset of symptoms. In very rare cases, the symptoms can last longer than usual and in a few cases, the symptoms tend to stay forever. A few individuals can face the recurrence of Bell's palsy, which can happen on the same side or opposite side of the face.

Cancers that Cause Blood in the Urine (Hematuria)

More from FindATopDoc on Bell's Palsy

Can conductive hearing loss be corrected?

My mother suffered Bell's Palsy and is now recovering.... 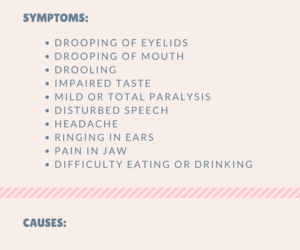 My mother suffered Bell's Palsy and is now recovering. Can a chiropractor help at this stage?