Tonsils are two glands located at the back of the throat and can be seen through the mouth. These glands help prevent infections from developing in the body. Tonsillitis happens when the tonsils become inflamed or infected by viruses or bacteria.

Tonsillitis is a common infection in children, but can also occur at any age. Most cases of tonsillitis occur in preschool children and through their adolescent years. The usual symptoms of tonsillitis are: 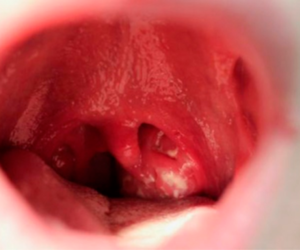 Have a question aboutTonsillitis?Ask a doctor now

Other symptoms of tonsillitis may include:

The condition is usually caused by viruses or bacteria, such as Streptococcus pyogenes, which causes strep throat. If tonsillitis caused by Streptococcal bacteria is left untreated, it can lead to serious complications.

The symptoms of tonsillitis often go away within a week up to 10 days. Children with tonsillitis can be diagnosed and treated by a pediatrician, while adults can see an internist or an ENT (ear, nose, and throat) doctor.

Tonsillitis is often caused by viral infections, such as those that cause influenza (the flu) and the common cold. In some cases, tonsillitis can also be caused by bacteria, particularly group A Streptococcus bacteria.

Other viruses that can cause tonsillitis include:

The infections that cause tonsillitis are contagious, and not tonsillitis itself. Viruses that cause the common cold and flu are easily spread through direct contact with people who are infected.

Infections caused by these disease-causing agents are easily spread, which is why it is very important to avoid passing the infection to other people by:

How long is tonsillitis contagious?

People who have chronic tonsillitis may develop obstructive sleep apnea, which prevents a restful sleep due to the swelling of the airways. The infection can also become worse and may spread to other parts of the body, such as in the case of tonsillar cellulitis.

In tonsillar cellulitis, a person tends to have a pus buildup behind his or her tonsils, which is also called as peritonsillar abscess. This condition usually require surgery or drainage.

Complications could develop if a person with chronic tonsillitis remains to be untreated or when bacteria tend to become resistant to antibiotics. Tonsillitis complications include poststreptococcal glomerulonephritis and rheumatic fever.

Most tonsillitis cases tend to get better within seven days without treatment. However, symptoms can be relieved by drinking plenty of water along with consuming a balanced diet, even if it is painful to swallow. Dehydration and hunger can make other symptoms worse.

Other available OTC treatments that can help relieve throat pain are oral sprays and lozenges. Another method of relieving a sore throat is to gargle using a mild antiseptic solution. Natural home remedies can also help, such as gargling using warm, salty water. To make this solution, add half a teaspoon of salt to 8 ounces of warm water. Do not swallow the water.

In some cases, antibiotics are not prescribed for the treatment of tonsillitis, even though tests confirm a bacterial infection. There are two reasons why:

However, antibiotics can be given if the patient has the following:

The surgical removal of the tonsils is called a tonsillectomy. Watchful waiting is often recommended to children with mild sore throats instead of having a tonsillectomy.

What is Tonsil Grading?

Causes and Symptoms of Tonsillitis

More from FindATopDoc on Tonsillitis 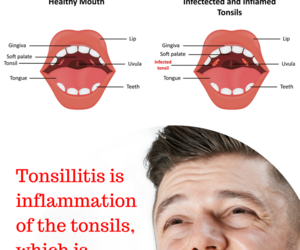 How to Prepare for a Tonsillectomy

Causes and Symptoms of Tonsillitis