What is pulsatile tinnitus?

Pulsatile tinnitus is a rhythmical noise in the ears that is similar to the sound of a person's pulse or heartbeat. This sound may come and go and may be quite distracting to some people. In most cases, pulsatile tinnitus is related to blood flow disturbances, which is why this symptom is also sometimes called as vascular tinnitus. This type of tinnitus occurs in approximately 3 percent of tinnitus patients.

People with pulsatile tinnitus often hear rhythmic thumping, whooshing, or throbbing in one ear. However, some also hear these sounds in both ears. Pulsatile tinnitus is an amplified sound of a change in the flow of blood near your ears or in your ears. Altered blood flow can be caused by the following factors:

Blood that quickly flows usually sound louder than a slow flow of blood. Pregnancy and vigorous physical activities can increase a person's blood flow throughout the body. Other conditions that can cause an increased blood flow in the body include:

Atherosclerosis usually occurs in elderly patients with a history of the following:

In BIH, there is an increased pressure around the brain without the presence of a tumor. Most patients who develop this condition are overweight females of childbearing age. The symptoms of BIH may include:

This condition can be managed by the administration of diuretics and weight loss. Majority of the patients tend to improve with weight loss alone.

People with pulsatile tinnitus regularly hear sounds that are similar to the sound of their heartbeat or pulse. For most people, this sound can be quite distracting and loud, and even unbearable at times.

Those who have high pressure in the cerebrospinal fluid around their brain (idiopathic intracranial hypertension) may also have the following symptoms:

People who have pulsatile tinnitus may need to see an otolaryngologist (ear specialist). The doctor will check the patient's ears along with performing a hearing test. The patient's eyes may also be checked to look for any signs of increased pressure in the brain.

Blood tests may also be requested in some cases to rule out other causes of pulsatile tinnitus.

The doctor may also ask for the opinion of other specialists, such as neurologists or ophthalmologists, who may also request other specialized tests, if benign intracranial hypertension is suspected.

Individuals who regularly experience pulsatile tinnitus can have poor sleep, which often leads to:

If a perforated eardrum is causing the condition, the perforation first needs to be closed by utilizing grafts. Narrowed and hardened arteries also need to be repaired to ensure a smooth flow of blood instead of a turbulent one.

The following therapies may also be helpful in cases that have an unidentifiable cause:

Other alternative therapies may include:

Does Tinnitus cause blood pressure to rise?

More from FindATopDoc on Pulsatile tinnitus 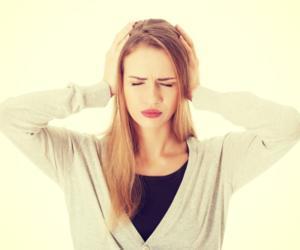 What is the hissing sound I am hearing in my ears?