A flat rectangular band of tissue is known as the trapezius muscle. The paired muscles form a diamond shape, hence it resembles a trapezoid (diamond shaped quadrilateral). It makes up for the majority of superficial cervical as well as thoracic musculature. It has the look of a kite. It runs from the back of our neck to the middle back.

It is innervated by the spinal accessory nerve and helps us with functions like shrugging our shoulders. It is also responsible for scapular movements and horizontal shoulder abduction. Since the trapezius muscle is large, it has many attachment sites. Due to its size and attachments, it has many functions. Depending on which region of the muscle contracts, many functions are performed. It has been known to act as a scapula stabilizer.

How long does a muscle strain take to heal?

The middle region pulls back the scapula, while lower portion performs the function of suppressing as well as rotating the scapula. In some head and neck movements, the upper trapezius works together with the sernocleidomastoid muscle. Trapezius muscle moves the shoulder blade and also rotates it outward.

There are three anatomic regions in the Trapezius muscle known as superior, middle and inferior regions:

Strain in the Trapezius muscle

The trapezius muscle is located between the neck and shoulder and goes right up to the midback. Increased and repetitive amount of stress on this area causes strain. In this condition, it becomes very difficult to move the shoulders or perform any overhead activity. This muscle strain also leads to discomfort and pain with stiffness along the shoulder area due to which the person finds it difficult to move the neck. This strain limits or decreases the motion of shoulders and neck.

Depending on the extent of strain; whether its mild or severe, the doctor would then carry out different treatment approaches. The main aim of the treatment would be to get back free movement of the affected area along with flexibility as well as improve the motion of arms, shoulder, back and neck so that the pain is relived.

How long does the pain last?

There is no exact duration that can be given as it depends on a number of factors like the cause of the pain, its source, the change in the lifestyle after the strain and body’s response to the treatment. It is important for the body to get rest after the strain or else the symptoms may get worse. It can take one to six weeks for the affected area to heal by itself. Also, it depends on the severity of the strain. During the healing period, it is necessary to give enough rest to the body, follow a well balanced diet and to stay hydrated.

What is a Hamstring Strain?

What is the best way to get my muscles to relax?

Do you Have to be an Athlete to Visit a Sports Medicine... 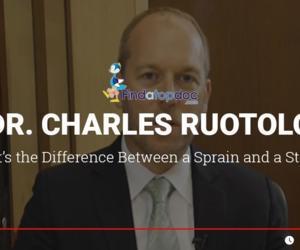 What's the Difference Between a Sprain and a Strain?

Can a chiropractor relieve muscle pain?

How do I prevent muscle strains at work?

How long does a muscle strain take to heal?

Ice for a sprain?

How can I prevent my back from getting strained at work?