Freckles are flat and circular spots that are beige or brown in color. Their size is usually comparable to the size of the head of a small nail. People who have red hair and a fair complexion often have freckles because of the MC1R variant gene, which is responsible for the production of a protein needed in normal pigmentation.

Freckles may develop when the skin is repeatedly exposed to the sun. They can also develop in young children who are 1-2 years old. Most of the time, they are uniform in color. However, their color may also vary on different people. They can appear reddish, tan, yellow, light brown, brown, or dark brown in color. When compared to the surrounding skin, they are slightly darker in color.

Can bone spurs be removed without surgery?

Have a question aboutFreckles?Ask a doctor now

After sun exposure, they may become darker and more obvious, but may lighten in winter months. Freckles usually develop when there is an increase in the amount of melanin and melanocytes. Freckle is a word that has originated from the Middle English word freken, which also came from the Old Norse frekner, which means freckled.

What is the difference between freckles and lentigines?

The medical term for freckles is derived from the Greek word ephelides, which refer to skin spots ranging from 1-2 mm in size. These spots are usually flat, tan, light brown, or slightly reddish in color, and usually appear during sunny seasons. Individuals with fair complexions often develop freckles, and are a genetic trait in some families. Those who have green eyes and red hair are usually prone to developing freckles. The appearance of freckles can be suppressed by regularly using sunscreen and limiting one's exposure to the sun.

Lentigines are certain types of larger pigmented spots that are usually found in skin areas with previous sunburn. This medical term is derived from the Latin word lenticula. Compared to the common freckle, they are darker in color and do not fade during winter. They are regarded as solar lentigo or lentigo simplex. Moreover, there is a normal number and appearance of melanosomes and melanocytes.

Most lentigines are isolated spots, although they can be a part of a certain rare genetic syndrome. Solar lentigines are commonly known as liver spots or age spots, which often appear on the back of the hands. The term liver spots do not mean that they have developed due to liver problems. The term is actually a misnomer. Although they appear over a period of time, they are not a sign of old age, but more likely an indication of sun exposure.

Moles refer to flat or slightly elevated brown to black bumps. The real nature of a mole is distinguished by the types of cells of which the bump is composed of. For example, a melanocytic nevus is a mole that is made of benign melanocytes.

Seborrheic keratoses are raised brown crusty lesions that are frequently found in older adults. They are usually found in areas where lentigines are abundant. They are also benign skin growths. Some may describe these growths similar to Rice Krispies or barnacles.

They are often medium brown in color, but their color may range from light tan to black. They also occur in different sizes and diameter ranging from a fraction of an inch to 2.5 cm. More commonly, they have a pencil eraser size or a little bigger than that. They gradually become thicker by forming a waxy and scaly appearance.

Their appearance looks as if they were glued to the skin, resembling a melted candle wax that has dropped on the skin. These growths may also appear in the same site where freckles have developed. They may occur in sun-protected areas of the skin, but they are more common to develop in areas that are frequently exposed to the sun.

They initially appear one at a time and occur as rough bumps, which are small in size. Eventually, these bumps become thick, rough, and have a warty surface. After the age of 40, seborrheic keratosis is very common. At least a few seborrheic keratosis may develop in a person's lifetime. Sometimes, they are also called as barnacles of old age.

A combination of genetic predisposition and sun exposure is thought to be the cause of freckles. Ultraviolet rays are emitted by the sun and fluorescent tanning lamps, and when these rays are absorbed by the skin, they help the cutaneous melanocytes to produce more melanin. Individuals who have fair skin, light or red hair, and light-colored eyes are more prone to the harmful effects of UV rays. They are also more likely to develop freckles. Freckles are basically a heavy buildup of melanin on certain skin areas.

How do you get freckles?

There are also research studies that suggest the influence of genetics when it comes to the occurrence of freckles. These studies have found out that identical twins have an almost similar number of freckles compared with fraternal twins. Thus, freckle counts are significantly influenced by heredity.

Why do freckles form in areas that are not sun-exposed?

Covered skin usually never forms freckles. Freckles are harmless and noncancerous, which means that the spots do not become malignant. Axillary (armpit) freckling is a condition that is usually seen in an inherited rare disease called neurofibromatosis. This type of freckle is different in appearance and distribution from the usual freckles we see.

A special type of skin cancer called lentigo maligna or Hutchinson’s freckles is uncommon and superficial. Older adults who have a considerable history of sun exposure may develop this condition. If left untreated, this condition can become a more aggressive malignant melanoma over the course of months to years. A skin biopsy can be done to effectively diagnose the condition.

Melanoma is a dangerous form of skin cancer. It may appear in young people and frequently sun-exposed skin areas. It may also appear in covered skin areas. Even though the exact cause of melanoma remains unknown, some studies have indicated that ultraviolet ray exposure may play a role.

Melanoma may arise from a previously normal-looking mole. It can even arise from a pigmented spot that has been there for years. Even from a completely normal skin, melanomas can arise. In such case, there are no apparent pre-existing moles. When melanomas are compared to freckles, they appear larger, darker, and more irregular in shape. Some people may incorrectly assume that melanomas always appear as raised bumps. However, many of them are actually flat.

You should go to a dermatologist for evaluation if you have one or more unusual skin spots. Enough information cannot be conveyed from verbal descriptions and photographs. Avoid self-diagnosis as well. It is better to be safe by taking the necessary steps. A full body skin examination is recommended by the American Academy of Dermatology. As part of the annual health exam, a physical examination is done for adults. If there is a new or unusual growth of moles, especially bleeding moles, then it is important to get it examined by a dermatologist or physician as early as possible. It is possible to cure skin cancer if is it properly diagnosed and treated at an early stage.

Freckles and moles are no threat, but the risk of developing melanoma and malignant skin cancer can be increased by them. The following self-examination can be done to check for freckles and moles:

If your freckles, moles, or sunspots show any of the above criteria, then contact your doctor or dermatologist as soon as possible.

Most of the time, freckles rarely need treatment. To help lighten or reduce the appearance of freckles, several safe methods are there, but they are expensive ones. For best results, frequent and multiple treatments are needed. However, not everyone can get the best results using the same treatment, and with repeated UV exposure, freckles can often recur.

Unfortunately, there are no known effective home remedies to eliminate the appearance of freckles. In concealing freckles, makeup is of great benefit.

Our genetic component cannot be changed, but we can prevent freckles by taking measures to protect ourselves from sunlight and by avoiding sunlight. We can do the following preventive measures:

It is better to prevent freckles than to treat it. The treatments to reduce freckles are very difficult and people do not often get satisfactory results. Early in childhood, people should start sun protection if they know that they have a hereditary tendency of freckling. Usually, children under the age of 18 have more sun exposure and UV skin damage. People at risk of developing sunburns and freckles are those who are fair-skinned. Such people are also at risk of developing skin cancer.

The Value of Freckles

Some people are fine with having freckles on their skin, whereas some are bothered by the appearance of freckles. Among people with freckles, a common request is a cosmetic improvement. On the other hand, some people desire freckles since it makes them look unique or gives them a special character. Hence, freckles can be of some value to different people.

What is the cause of blood in the urine?

Can I get a partial with no back teeth?

Is it possible to remove my freckles?

More from FindATopDoc on Freckles

My daughter has more freckles than anyone else in our... 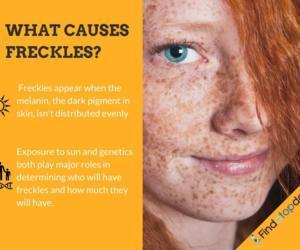 How do moles and freckles differ?

My daughter has more freckles than anyone else in our family. Why is this?

How do moles and freckles differ?

Is it possible to remove my freckles?