A barrel chest refers to an individual's chest that appears to be always partially inflated. It looks as if they are taking a deep breath with their rib cage broadened. An individual with a barrel chest may find it hard to breathe.

A barrel chest may develop due to osteoarthritis or chronic obstructive pulmonary disease (COPD). Medical treatment may not always be required, but when a barrel chest is caused by COPD, then prompt treatment is needed for the condition.

Have a question aboutChest Injuries and Disorders?Ask a doctor now

When it comes to fitness, a barrel chest means an expanded chest size due to bodybuilding. In this case, a barrel chest may be desirable. However, this concept is totally opposite in medical terms. In medical literature, the term barrel chest is typically used to describe a finding, which suggests a clinical process, and is a term used in clinical papers and textbooks.

What does it actually mean?

The rib cage system, which encloses the heart and lungs, dictates the shape of the chest. From the back to the lungs, the ribs are at an angle downward sloping. In rare cases, the orientation of the rib cage is not at a downward angle but in the horizontal position, which gives the appearance of a barrel-like shape.

An individual with a barrel chest has a rounded and bulging chest. It is not a disease, but a sign of an underlying medical condition, which is mostly related to osteoarthritis.

Osteoarthritis can make the joints stiff, especially those that are attached to the spine. The ribs tend to become fixed in an expanded position leading to a barrel chest appearance.

This particular physical presentation is a common occurrence in some populations. A good example would be people who live in the Himalayas and the Andes, which is above 15,000 feet or 5,000 meters. In these areas, people tend to develop a barrel chest to cope with the high altitude and increased red blood cell count, which gives them more available oxygen and delivery.

When it comes to bodybuilders, they usually work out to build up their pectoral muscles, which eventually lead to the appearance of a barrel chest.

A barrel chest is also associated with emphysema, which eventually causes the following conditions:

Conditions Associated with a Barrel Chest

COPD is a group of respiratory diseases, which include chronic bronchitis and emphysema. These lung conditions tend to get worse over time if the symptoms are not managed well. According to the National Heart, Lung, and Blood Institute, the third leading cause of death in the US is COPD. It has been estimated by the National Emphysema Foundation that 11.2 million people in America have COPD, and the number of people diagnosed with emphysema is around 3.1 million.

If a person has COPD, breathing becomes difficult because the lungs are damaged in different ways:

To resemble a barrel, the area of the chest may change its shape, and the key muscle responsible for the movement of air in and out is the diaphragm. It becomes weaker and its length and thickness are also lost. If there is an improper functioning of the lungs, then deep breathing and exhaling air completely become difficult. Most of the time, the lungs remain inflated and the rib cage is in its expanded form. In the later stages of COPD, a barrel chest can be caused by a state of hyperinflated lungs.

Emphysema is a type of COPD that can also cause a barrel chest. After physical activity, the two major signs and symptoms of emphysema are shortness of breath and chronic cough. Other symptoms may include:

Although COPD and emphysema do not have any cure, individuals with these respiratory conditions can benefit from lifestyle changes and proper symptom management. These changes include:

Osteoarthritis is a degenerative joint disorder that is characterized by the breakdown, inflammation, and cartilage loss in the joints. It is a type of arthritis that slowly develops and most frequently occurs in adults. The most frequently affected areas are the spine, hips, hands, and knees, which swell and become stiff.

A barrel chest may develop when osteoarthritis affects the rib cage that meets the spine. The flexibility of the rib joint will be lost and it will become stiff. It will look as if in the out position the ribs are stuck.

The chest wall may become rigid due to osteoarthritis of the ribs and spine. Other signs and symptoms are joint swelling, severe joint pain after exercise, morning stiffness, and impaired movement.

A barrel chest is another sign of cystic fibrosis in children. Cystic fibrosis is a genetic condition, which produces abnormally thick and sticky mucus that can clog the lungs and affect other organs in the body.

Treating a Barrel Chest When You Have COPD

There is no specific treatment for a barrel chest. Doctors often treat the underlying condition to help reduce the appearance of an expanded rib cage and chest.

From Physician to Patient: A Pulmonologist’s PPMC Experience

When to Be Concerned About Sternum Pain

More from FindATopDoc on Chest Injuries and Disorders 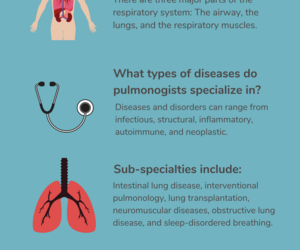 What is a Pulmonologist?

I have multiple small nodules in both the lungs. What...

From Physician to Patient: A Pulmonologist’s PPMC Experience