Can you imagine having a small bruise but feel like someone has hit you with a sledgehammer? If you can imagine the scenario or may have even felt it at some point in your life, then you must know what it's like to have hyperalgesia.

Hyperalgesia is a medical term, which means that the involved tissues have an increased amount of sensitivity to painful stimuli. In this condition, minor injuries turn out to be so painful. Pain can also be felt throughout the body.

Hyperalgesia is a medical condition, wherein an individual develops an extreme sensitivity towards pain. A person with hyperalgesia abnormally experiences significant pain even in minor injuries. Even though there are multiple potential causes linked to the onset of hyperalgesia, the condition is known to be the result of certain changes in a person's nerve pathways, which lead to an overactive response towards pain. There are various medications available to prevent the symptoms from worsening.

Pain does not necessarily mean that something is damaged or injured, but such pain would mean that the brain is trying to interpret the signals from the body. In some cases, these signals are amplified because of the suppression natural pain-relieving pathways present in the body.

One of the classic examples of hyperalgesia is when an individual is experiencing withdrawals from opioid. A sudden discontinuation of pain medications would ideally leave a person with a non-functional natural pain-relieving system. At the same time, it would also lead to an activation of pain pathways, which are situated deep within the nervous system. This kind of storm caused by hyperalgesia would leave an individual with extreme aches all over the body.

Another cause of increased pain sensitivity is the overuse of certain short-acting opioid medications for the treatment of chronic pain conditions. Certain pain medications are known to cause a lot of pain if the patient is experiencing frequent cycles of withdrawals. As previously mentioned, opioid medication withdrawals are quite well-known to causing hyperalgesia. Moreover, the frequent cycles of such drug withdrawals would sensitize the nervous system.

Hyperalgesia is usually categorized into primary and secondary conditions. Both of these types occur because of an initial tissue trauma as well as inflammation. Let’s have a detailed look at the two types of hyperalgesia:

This is another kind of hyperalgesia, which happens when people abuse opioids. This condition develops due to the opioid's toxic effects in the body.

According to experts, our body digests opioid’s waste, which can damage our nerves and tissues leading to an increased sensitivity to pain. Sadly, most individuals taking opioid usually end up taking more of the drug because of heightened pain, and taking more of it often leads to a never-ending cycle, which eventually causes them to overdose.

There are also other factors, which can enhance the development of hyperalgesia. Few of the factors include the activation of specific spinal proteins and increased levels of protein kinase C.

Our body consists of several nerves or also known as pain pathways, wherein the signals would start to miscommunicate with each other leading to hyperalgesia. Some researchers think that the occurrence of hyperalgesia happens when the chemicals that help decrease pain are disrupted. However, other studies suggest that the occurrence of hyperalgesia may be caused when the crossed wires present in the nervous system would prevent pain signals from accurately transmitting.

One of the main symptoms of hyperalgesia is an extreme reaction to painful stimuli without any kind of new injuries or a worsening health condition. A good example would be a surgical incision, which becomes more painful over time, even though the wound is not infected and not further injured.

Hyperalgesia is not the same as drug tolerance, although the two conditions have somewhat similar processes.

If an individual tends to develop a particular kind of tolerance towards a certain drug, then it would mostly mean that the body is now accustomed to the presence of the drug as well as the current dosage of the drug. This, in turn, means that the drug is no longer working as it should have been. In certain cases, increasing a drug's dosage would result in a worsening pain instead of relieving pain.

Sensitization of the nervous system is probably the main reason for an individual to experience heightened sensitivity to pain. Common medical conditions such as headaches, fibromyalgia, and sciatica have a hyperalgesia component associated with that experience. Moreover, these conditions are also linked to an altered nervous system functioning.

The nervous system acts as the body's alarm. When the alarm system overreacts to painful stimuli, even the slightest of pain would feel huge, which is why it hurts everywhere in the body. Hyperalgesia is not only an increased sensitivity towards pain, but it is also an indicator of a dysfunctional nervous system caused by sudden drug withdrawals, drug abuse, or sensitization of the nervous system.

The process of hyperalgesia can also be reversed by resetting the alarm system of our body, which would then allow the body’s natural pain-relieving system to return back to normal, thereby eliminating the frequent cycles of desensitization and withdrawals. However, resetting one's alarm system can be quite difficult.

It is not easy to diagnose the condition, especially when individuals have developed opioid-induced hyperalgesia (OIH). This medical condition is known to present difficulties for the doctor when it comes to treatment.

The doctor would first take your medical history and would also review the medications that you are taking to ensure that your condition is not due to OIH.

Some of the signs that would indicate hyperalgesia may include:

As of now, there are no definite diagnostic tools available for the accurate diagnosis of the existence and cause of hyperalgesia.

When hyperalgesia is caused by opioid use, then the doctor will have a look at its dosage and make certain adjustments. While the individual may still experience an increase in pain due to the changes, such changes would give way to a reduced painful experience in people suffering from hyperalgesia. In such cases, the doctor may also consider the option of non-opioid medications.

A doctor may also prescribe different classes of opioids, such as methadone, which is a medication used for pain relief. However, there is still a possibility that the individual taking methadone may suffer from hyperalgesia. Another medication that can help reduce the incidence of hyperalgesia is buprenorphine. The drug works by blocking brain and spinal cord receptors.

Another option is ketamine, which again helps in blocking the receptors. However, it is important to consult your doctor before taking other types of medications. These drugs must be taken under close supervision or else it can lead to certain side effects or may worsen the existing symptoms.

A nerve block is also another treatment option, wherein a local anesthetic would be used to numb or delay painful nerve impulses. Most of the time, when it comes to the treatment of hyperalgesia, a trial and error approach would be required to give room for frequent dosage adjustments. This approach should be carried out until the individual achieves a significant pain reduction.

Can a binge eating disorder be linked to anxiety?

Would it be safe working on a coronavirus ward as discoid... 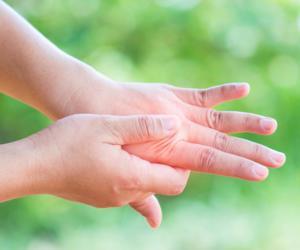 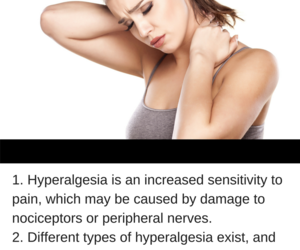 Types of Hyperalgesia There Symptoms and Treatment

What treatment should I get for nerve root compression?...

What treatment should I get for nerve root compression?

Why Going Gluten-Free Is the Next Step for Peripheral Neuropathy

Types of Hyperalgesia There Symptoms and Treatment