In the back of the throat, there is a lymphoid group of tissues known as the tonsils. In the throat, there are four groups of tonsillar tissues, including palatine, lingual, adenoid, and nasopharyngeal. Each tonsil is covered by pink mucosa and is composed of tissue similar to lymph nodes. Pits running through the mucosa of each tonsil are called crypts. Tonsils help to fight infections and are a part of the lymphatic system. Removal of tonsils does not seem to increase the chances of infections. In response to infections, the tonsils swell and may vary in size.

Tonsils can get affected by abscesses around the tonsils, infections of small pockets within the tonsils, and chronic tonsillitis. If there are symptoms of enlarged or infected tonsils, then you should see a doctor.

How do I know if my kid's sore throat is serious?

Have a question aboutTonsillitis?Ask a doctor now

Methods used to check the tonsils

The most common sign is swelling, but other symptoms include:

Enlarged tonsils can cause the following symptoms:

Below are the types of tonsils:

Oropharyngeal evaluation gives a better understanding of the patient’s risk of nocturnal airway closure; however, a single standard method has not been developed yet, since the size of the airway is determined by the hard and the soft palate and is likely related to congenital and acquired factors.

The size of the tonsils is graded on a scale from one to four. Four is the largest size. The tongue should be rested comfortably in the mouth for best judgment of the tonsil. Palatine tonsils are graded based on how much the airway is obstructed due to the tonsil protruding from either side of the oropharynx.

Along the back wall of the throat are scattered blebs of tonsils known as Waldeyers ring. In a person, even after tonsillectomy, Waldeyers ring play a vital role in causing pharyngeal strep tonsillitis.

The tonsils are assessed by making the patient open his mouth and depressing the tongue. A tongue blade is used, while a penlight is used for inspection of the back of the throat of the patient to check for pink, symmetrical and normal-sized tonsils. Bright-red, enlarged tonsils, or white or yellow tonsils are abnormal findings. Inflammation of the tonsils is known as tonsillitis.

A modified version of this was developed by Friedman and colleagues. The grading scale assessed the size of the upper airway. It attempted to find out which surgical intervention for obstructive sleep apnea would likely be more successful.

In palate grading, the patient is asked to open his mouth wide without protruding the tongue out. The procedure is repeated five times. There can be variations sometimes with different examinations.

The primary difference in both the assessments is that in the Friedman system the tongue is not protruded out. This scale is also referred to as the Modified Mallampati Scale. By combining the palate grade, tonsil size, and BMI, Friedman created a staging system. This would help to determine the surgical practices for obstructive sleep apnea. Lower staging would predict successful treatment of obstructive sleep apnea by uvulapatopharyngoplasty only. Also, the condition of the upper airway can be obtained from the uvula. Swelling at the edge of the soft palate may indicate snoring. A long or wide uvula causes airway crowding, and this may result in sleep apnea. Another factor in assessment of the airway crowding is the size of the adenotonsillar tissue. Even though enlarged tonsils contribute to airway crowding, soft tissue hypertrophy seems to play a less significant role. Tongue positions and volume likely affect patency, and in cephalometric studies, it has found to be correlated with obstructive sleep apnea. Tongue scalloping describes that the tongue is large or the lower jaw is small.

Brodsky developed a grading system. With the help of this grading system, it was possible to describe the tonsil enlargement. This helps the doctor to find any other underlying medical conditions. For this assessment, anterior to the circumvillate papillae, the tongue blades are pressed gently on the anterior two thirds of the tongue. Gagging may result in a false positive test, since gagging causes the tonsils to move medially, which can make them appear larger. The parameters to be considered are:

To calculate, in percent, the occlusion of the oropharyngeal airway:

Enlargement of the tonsils can have substantial ill effect on the health of the child or adult.

In clinical settings, it is important to document tonsil size and tonsil grading, as well as perform reliable monitoring. The grading scale of tonsils helps the clinicians to record the change in the tonsil size and communicate accordingly. Various grading systems may provide results that may be interpreted differently by the users. This makes the assessment of tonsil size by using tonsil grading system unreliable. Due to the variability in tonsil grading systems, there can be confusion in communicating the tonsil size. Hence, it is necessary to compare the existing tonsillar grading scales and to check the reliability and reproducibility. However, the reliability of this needs to be studied. Due to recurrent infection or as a part of generalized lymphoid hypertrophy, tonsils undergo hypertrophy. There is a good correlation between clinical tonsil grade and tonsil volume in snorers and obstructive sleep apnea.

A study that was recently conducted measured the reliability of three scoring methods, including the Brodsky grading scale, 3- , and 5- grade scales. The 3-grade scale has a wide grade interval, so it is simpler to use, but higher reproducibility was found in the Brodsky grading scale and 5-grading scale. Visual objective examination of tonsil size is the pragmatic standard method to assess the eligibility for adenotonsillectomy. The children can expose the tonsil freely from different angles in this method.

More from FindATopDoc on Tonsillitis

Can tonsillitis cause bad breath? 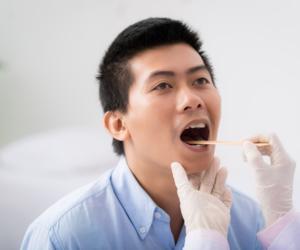 What is a Peritonsillar Abscess?

Is it easy to misdiagnose strep throat as tonsillitis?

How do I know if my kid's sore throat is serious?

What are the treatment options for tonsillitis?