Ureaplasma is a small bacterium that belongs to the class Mollicutes. This group of tiny bacteria lacks cell walls and are regarded as the smallest self-replicating and free-living cells, making them unique from other types of bacteria. Although the infection it causes can be treated using antibiotics, not having a cell wall makes them resistant to penicillin and other common antibiotics.

Most individuals may be unaware that they have Ureaplasma in their bodies. However, most cases of Ureaplasma are linked to conditions or diseases involving both the female and male reproductive systems. Infected pregnant women can also pass the bacteria to their baby during pregnancy.

How do you know if you need a chiropractic adjustment?

Have a question aboutUreaplasma?Ask a doctor now

Normally, Ureaplasma is a part of the human microbiome, which is a collective term for an array of microbes that live in and on humans. These microorganisms help people maintain reproductive health, digest food, and fight infections. However, there are cases, in which normally harmless bacteria attack healthy tissues and replicate, creating a bacterial colony that can cause an infection.

There are a number of medical conditions that are associated with Ureaplasma. They include pregnancy complications and bacterial vaginosis in women. Ureaplasma is also found in the genital flora of sexually active men and women.

How is Ureaplasma transmitted?

Ureaplasma is often transmitted through unprotected sexual contact and is very common in people who are sexually active. It usually enters the body through the urethra or the vagina. Another mode of transmission is from an infected mother to her child. However, the infection tends to go away after a few months. Ureaplasma is rare in children and people who are sexually inactive.

Individuals who have a weakened immune system, such as those who have HIV/AIDS and organ transplant recipients, have an increased risk of developing infections caused by Ureaplasma.

What are the symptoms of Ureaplasma?

If Ureaplasma lives with other bacteria in balance, it does not cause any symptoms. However, when its population increases, symptoms may develop along with certain health problems, such as urethritis, bacterial vaginosis, and preterm labor.

When Ureaplasma causes urethritis or the inflammation of the urethra, men and women may have the following symptoms:

When it causes bacterial vaginosis, its symptoms may include a foul vaginal odor and a watery vaginal discharge. Individuals with Ureaplasma also have an increased risk of developing other medical conditions, such as kidney stones, endometritis, prostatitis, and newborn respiratory diseases.

Ureaplasma can cause pelvic inflammation and urinary tract infections. However, it may go on unnoticed since most people are asymptomatic.

To diagnose Ureaplasma, a biopsy or swab tested in the laboratory is used. Samples can be taken from the urine, vagina, urethra, or uterine lining. Due to its tiny size, its identification often requires special equipment and laboratory tests.

Ureaplasma is usually treated with antibiotics. The antibiotics preferred for the treatment of Ureaplasma infections are azithromycin and doxycycline. If patients do not respond well to treatment, the doctor may prescribe other antibiotics, such as fluoroquinolones or erythromycin.

Even though Ureaplasma is highly contagious, it is possible to prevent the infection through abstinence. Aside from reducing a person's risk of Ureaplasma, abstinence can also prevent the transmission of other sexually transmitted diseases (STDs).

It is also important to note that birth control does not prevent sexually transmitted diseases. Other preventive measures include:

Ureaplasma affects the genitourinary system of men, but often without clinical manifestations. The incubation period of Ureaplasma can vary from a few days to a month and may be dangerous to the other partner because a longer incubation period also takes time to fight the infection.

The risk of contraction becomes minimal if there is a permanent sexual partner. In men who get the infection at the initial stages, there may be a discharge from the urethra that could be scanty and turbid. However, this symptom often goes unnoticed by most individuals.

Urethritis may be sluggish and cause itching, which intensifies during and after urination. There could also be a lesion in the prostate gland if the infection is left untreated. Men may develop prostatitis, which can make urination painful and difficult along with a purulent discharge from the urethra in severe cases. Sepsis could develop if the pathogen enters into the systemic circulation. Antibiotics are usually given to treat the condition. A qualified specialist should handle the case since bacteria are becoming resistant to tetracycline.

Strains of Ureaplasma have been isolated from approximately 40-80 percent of sexually active but asymptomatic women. Symptoms only developed in some adults who had bacteria in their upper urogenital tract. The most common sexually transmitted infection is nongonococcal urethritis (NGU).

The most common predictors of the infection are the socioeconomic status and sexual behavior of women. Compared to men, Mycoplasma species is carried more by females. Neonates also have a higher chance of contracting the infection from their mothers. Ureaplasma less commonly occurs in adolescents and children.

Genital mycoplasmal microorganisms are found in less than 5 percent of children and 10 percent of adults. PCR and culture testing are specialized tests that can help diagnose the condition. Due to the lack of facilities in many clinics, testing becomes difficult. To treat the infection, the drug of choice are macrolides due to tetracycline resistance in many isolates. Some even use fluoroquinolones.

Since Ureaplasma is a part of the normal flora, it shouldn’t be much of a problem unless the affected individual is pregnant. Speak with your doctor if you are pregnant and worried about Ureaplasma complications.

Is it ok to walk on a sprained ankle?

More from FindATopDoc on Ureaplasma

Can a tooth crack under a crown?

Are antidepressants bad for my general health? 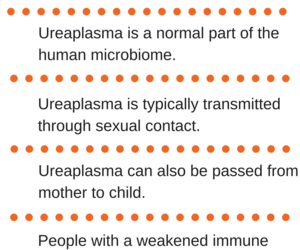 What Are The Causes of Ureaplasma?

What Are The Causes of Ureaplasma?