Xanthun gum is an extracellular high molecular weight polysaccharide. It is obtained by microbial fermentation from Xanthomonas campestris and some other related micro organisms. The microorganism is produced on a medium which contains glucose, NH4Cl, and a mixture of amino acids and minerals. It is recovered by isopropanol precipitation in the presence of KCl.

Its name is derived from the strain of bacteria from which it is derived. The same bacteria cause black rot on cauliflower and other leafy vegetables. This bacteria-derived product is commonly used as a stabilizing and thickening agent in food and medicine.

Have a question aboutMedicines?Ask a doctor now

The strain of X.campestris was isolated in the Northern Regional Research Laboratory of the United States Department of Agriculture. It was found to produce a polysaccharide, which was of commercial importance. It was denoted as B-1459. Extensive research was carried out in many industrial laboratories, which resulted in its semi commercial production by CP ‘Kelco’ Company, United States, under the trade name ‘Kelzan.' It was approved for use in 1968 after extensive animal testing for toxicity.

The major producers of xanthan gum are Merck and Pfizer in the United States, jungbunzlauer in Austria, and Sanofi-Elf in France. Due to its unique combination of properties that provide stability and other desirable qualities at very low concentration, xanthan gum has received wide acceptance by the food industry.

Xanthan gum is produced by aerobic fermentation of a pure Xanthomonas campestris culture in a medium containing carbohydrate and other nutrients. As organic acids are formed as byproducts and as part of the polysaccharide molecule, the broth pH decreases during fermentation.

It is necessary to add caustic soda to maintain the pH within the range of 6.0-7.5 or else the pH might fall below the critical point of 5.0, which will cause the gum production either to sharply decrease or cease all together. Glucose concentration should be between one and five percent.

This will provide optimal yield. Temperature should be approximately 28oC. When the carbohydrate source is exhausted, the broth is pasteurized. Pasteurization is carried out at nearly boiling temperature. The xanthum gum is recovered by isopropyl addition and by adding more solvent precipitated polysaccharide. It is dried and milled to the desired particle size distribution.

The biosynthesis takes place as flows:

The biosynthetic pathway for xanthan gum was proposed by Sutherland in 1977.

The primary structure was determined by Jansson, Kenne, and Lindberg.

The structure differs with different strains of X. campestris.

The polymer backbone consists of one 4-linked β-D-glucose. At the 3-position of alternate glucose monomer units branches a trisccharide chain, which contains a glucuronic acid and two mannose residues. Terminal β-D-mannose unit is gycosidically linked to the 4-position of β-D-glucuronic acid, and this is turn is glycosidically linked to the 2-position of α-D-mannose. A pyruvic acid moiety is joined to the 4- and 6-positions by a ketal linkage. This appears on approximately one–half of the terminal D-mannose residues. The higher the pyurvic acid content is, the greater the viscosity and thermal stability are. The non-terminal D-mannose unit at the 6-position carries an acetyl group. The pyruvate group destabilizes the ordered helix while the acetyl group stabilizes it. The helical nature of xanthum gum has been revealed by electron microscopy. X-ray diffraction studies on oriented fibers have shown the molecular conformation of xanthan gum as a right-handed, five-fold helix.

The molecular weight varies from two million to as high as 11-50 million. Despite its high molecular weight, it is soluble in water. The structure and conformation appears to have a key role in determining the unique properties of xanthum gum.

The general properties of xanthan gum are the same as those of long chain polymers, but, since it has more functional groups, it also displays some distinctive properties under certain conditions. The properties vary depending on its use.

The heavy metal content has to be low for food application, which is not the case for other industrial applications. Food-grade xanthan gum is a cream colored powder. Approximately ninety percent of the product remains as inorganic residue after ashing.

It is an efficient thickener, and its solution has the property of high viscosity at low concentration.

Its molecules can form a banded spiral co-polymer and a fragile network structure, so it can support forms of solid particle, liquid drops, and air bubbles. Hence, it displays favorable suspension capacity and strong emulsion stability.

At a low shear rate, it has high viscosity, and on a high shear rate, its viscosity decreases, but the molecular structure won't change. It restores its original viscosity once the shearing action is removed. This property is remarkable and plays an important role in stabilizing suspension and emulsion.

Due to its strong hydrophilicity, it can quickly dissolve in water. It is soluble in cold and hot water. It is not affected by changes in pH value. However, it should be used properly. For example, if xanthan gum is directly mixed with a small amount of water and not uniformly stirred, then the outer sphere will absorb water and expand into a micelle. This will prevent the water from entering into the inner sphere; thus, its effect is hindered. Therefore, it should be prepared into solutions.

5. Compatibility and stability of xanthan gum

Helical conformation makes its viscosity insensitive to differences in ionic strength and pH. The backbone of the molecule is protected by side chains, which results in superior stability when exposed to acids, alkalies, and enzymes.

1. Food Applications - Xanthan gum possesses stabilizing and thickening properties, which help to give some foods or products their desired consistency. It is used in toothpastes, lotions, medicines, puddings, ice cream, and cosmetics.

It is used for suspension in biocides, fungicides, pesticides, and other agricultural chemicals. In the ceramic industry, it is also used for ingredients of glazes. It is also used in polishes for leather, pigments, and emulsion inks for textiles and paper.

3. Health - it can help people with muscular or neurological abnormalities to swallow more easily, because xanthan gum tends to increase the viscosity of any liquid. Xanthan gum slows digestion and lowers the absorption of sugar or cholesterol in people with diabetes. It is also used as a laxative.

4. Cosmetics - xanthan gum has the capacity to hold water, to enhance freeze-thaw stability, to inhibit starch retro-gradation, to help keep different ingredients from separating, and it has skin-hydrating properties. It also improves shelf life. Hence, it is used in cosmetic products. It improves texture, giving a pleasant feeling to the skin. It provides stability to creams and lotions. It provides a stable, rich, and creamy lather to shampoos and liquid soaps, and it improves the flow properties. In fake blood and in gunge/slime, xanthan gum is a common ingredient. It is an excellent binder, so it is used in toothpastes.

Xanthan gum may swell in the intestine and form an emollient gel, which stimulates peristalsis and pushes the stool through. Some people are not able to produce enough saliva (Sjoren’s syndrome), and xanthan gum works like saliva to lubricate and wet the mouth in such people. Evidence shows that it might reduce demineralization of tooth enamel, and hence it may be used in toothpaste.

Side Effects of Xanthan Gum

Exposure to xanthan gum powder may cause flu-like symptoms, lung problems, and throat and nose irritation. It is safe to take up to 15 grams per day.

Since much is not known about its side effects during pregnancy and breast feeding, it is better to avoid large amounts of xanthan gum in these situations.

People experiencing nausea, vomiting, appendicitis, and narrowing or blockage of the intestines should avoid the use of xanthan gum, since it is a bulk-forming laxative.

It can cause migraines, skin irritation, flatulence, diarrhea, and bloating. Feeding xanthan gum based thickeners should be avoided in case of infants, since its thickening properties for liquids can pose a choking hazard. Xanthan gum slows sugar absorption and thus interacts with diabetes medications. Therefore, diabetics are advised to limit their intake to 12 grams per day.

Comparison with Other Polysaccharides

It has high resistance to pH in the range of 2-12. This makes xanthan gum well-suited for the food industry. At low pH, it shows excellent stability. Even in the presence of acids and salts, it shows high resistance to temperature variation. It shows high viscosity, even at low concentrations. At ambient temperature, it shows reasonable stability for several months. Therefore, xanthan gum is much more stable and reliable for certain situations than other polysaccharides.

Xanthan gum has many uses in both the food industry and medical industry, as well as other industries. Before consuming xanthan gum, talk to your doctor if you have any medical concerns.

More from FindATopDoc on Medicines 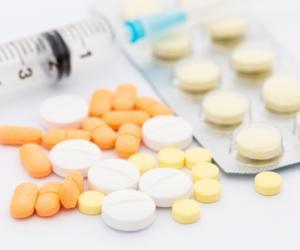 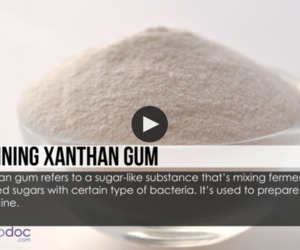 What is Xanthan Gum? 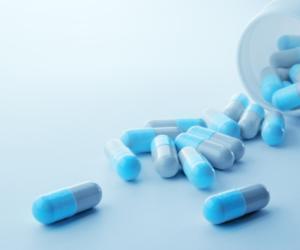 What decides the medication before my surgery?

What is Xanthan Gum?