Hallucinations are sensations that people perceive as real, but in reality, are only created by their mind. A person's five senses are often affected. Examples are hearing voices without anyone around or seeing images that are not real. Such symptoms are may due to mental illnesses, drug side effects, and physical health problems, such as alcoholism and epilepsy.

Depending on the cause of hallucinations, people who experience it may need to see a general practitioner, a neurologist, or a psychiatrist.

I am hallucinating in bed at night. Is it a serious...

Have a question aboutHallucinations?Ask a doctor now

Visual hallucinations involve seeing things that are not really there. It may include seeing objects, people, visual patterns, or lights. An example would be seeing someone who is actually not in the room and crawling insects on the skin, which nobody else can see.

Olfactory hallucinations usually involve a person's sense of smell. Detected odors are not really present in the environment and may vary from one person to another. Odors may either be fragrant or foul and may occur in one or both nostrils. An example would be waking up in the middle of the night smelling an unpleasant odor in the room when there isn't. Olfactory hallucinations also include certain scents that you like, such as the smell of fragrant flowers.

Gustatory hallucinations involve the sensing tastes that are not really there. The taste often involves an unpleasant flavor. However, it can also be pleasant, depending on a person's like or dislike of a certain taste. This type of hallucination is relatively uncommon when compared to other types of hallucinations.

Gustatory hallucinations may also be induced by hallucinogenic compounds, such as deliriants, dissociatives, and psychedelics in moderate dosages. These hallucinations can also be a symptom of schizophrenia and certain types of epilepsy. An example would be complaining about sensing a rotten taste in the food, even though there isn't.

This type of hallucination involves the feeling of touch or movements in the body that are not there, such as bugs crawling on your skin and burning or itching sensations in the body.

Hallucinations occur due to a variety of reasons. They include:

Substance abuse is a common cause of hallucinations in people. After taking drugs like cocaine or drinking excessive amounts of alcohol can cause people to see or hear things that are not there. Examples of hallucinogenic drugs that can cause hallucinations are LSD (lysergic acid diethylamide) and PCP (phencyclidine), which is also commonly known as angel dust.

Certain prescribed medications for both physical and mental conditions may also trigger symptoms of hallucinations. These medications include drugs for the treatment of psychosis, epilepsy, depression, and Parkinson's disease.

Apart from certain medications, there are also medical conditions that can cause hallucinations. They include:

Mental health conditions are one of the most common triggers of hallucinations. They include dementia, delirium, or schizophrenia. Aside from mental illnesses, other psychological issues may also cause hallucinations.

5. Lack of Sleep or Insomnia

Hallucinations can also occur in people who do not get enough sleep, especially when they are sleep-deprived for several days or when they have chronic insomnia.

Once the doctor has carried out a proper diagnosis and identified the root cause of the hallucination, he or she will be able to prescribe the best form of treatment for you.

As mentioned earlier, treatment for hallucinations totally depends on the underlying cause. If a person's hallucinations are caused by severe alcohol withdrawal, medications that can slow down the central nervous system might be prescribed by healthcare providers.

However, if a person's hallucinations are due to Parkinson's disease with dementia, such medications may not help at all. For this reason, it is quite important to have an accurate diagnosis to effectively treat the condition. Treatment options may include:

Another option that may be included in the treatment plan for hallucinations is counseling. Psychological counseling is particularly beneficial if a person's hallucinations are caused by a mental health issue. Therapy sessions with a counseling psychologist can help people understand their situation and mental health condition better by building coping strategies and skills, especially when fear and paranoia take over.

A person's recovery from hallucinations mostly depends on its underlying cause. If hallucinations are due to excessive alcohol consumption or a lack of sleep, these behaviors can be modified. If a person's hallucination is due to mental health issues, such as schizophrenia, prescription medications can significantly help improve the symptoms. A positive outcome is more likely achieved if people seek immediate medical help along with diligently following their prescribed treatment plan.

Hallucinations can be a quite terrifying experience for a number of people with mental health issues and other health problems. However, hallucinations can be treated and improved by taking prescription medications and participating in psychological counseling.

Does mental illness cause hallucinations?

My father started hallucinating. What can we do to...

My mother is suffering from hallucinations. What is...

More from FindATopDoc on Hallucinations

Why am I having hallucinations?

Suffering from hallucinations, sleeping issues and... 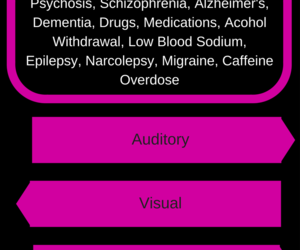 My mother is suffering from hallucinations. What is the treatment for this?

Does mental illness cause hallucinations?

I have hallucinations at night and now I am unable to sleep. What should I do?