A fever of unknown origins (FUO) is described as febrile disease/illness. It is characterized as the following: A fever greater than 38.3 degree Celsius on several occasions, the duration of the illness lasts for more than 3 weeks, and there is a failure to reach a diagnosis in spite of a weeklong inpatient evaluation.  There could be several possible causes of this fever in children and adults. More often than not, a fever with an unknown origin is an atypical appearance of a common illness rather than an unusual illness.

At present, the description of fever of unknown origins includes people who have been diagnosed following at least 2 outpatient visits or 3 days of admission in the hospital. Other categories include:

Can I take an anti-allergy medication and a paracetamol...

Diagnosing the type of Fever of unknown origins is crucial for a doctor to create a treatment plan. The various causes responsible for FUO could be any of the following:

Almost all cases are unusual presentations of common diseases such as tuberculosis, gallbladder disease, HIV infection, and endocarditis rather than of rare diseases.

In children, almost about 50 percent of cases are caused by viral infections. Autoimmune diseases, cancers and sarcomas, and other miscellaneous diseases make up the rest of the percentage. Other causes may also include drug induced fever, central nervous system dysfunction and a factitious fever. On the other hand, in adults, cancer or sarcomas, and infections are the most common causes for most of the cases of fever of unknown origins. Autoimmune diseases, meanwhile, are responsible for 10 to 20 percent of the cases, in adults.

In most cases FUO resolves itself in time. Once the fever lasts for more than 3 weeks and gets diagnosed as a fever of unknown origins, the doctor will then run some diagnostic tests to find out more on the underlying causes of the fever. Various tests that they will ask you to run include the following:

Doctors should be aware of all the symptoms (both previous and present) of the patient by asking them again. This is because even if the assessment of the condition if thorough, patient usually remember other details too when the questions are repeated.

Hence, getting a professional’s advice on this issue is immensely important and plays a crucial role. The doctor is the only one who can give advice, diagnose, and get to the bottom of the underlying issue.

Fever in Adults: What You Should Know

Why is my daughter getting a fever without any infection?

Is fever after a root canal normal?

What can I do about my son's high fever? 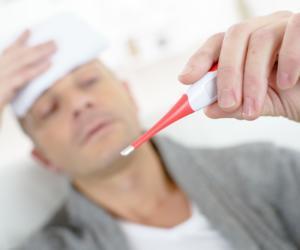 What can I do with my child's high fever?

My baby who is 8 months old had convulsions. What could be the reason?