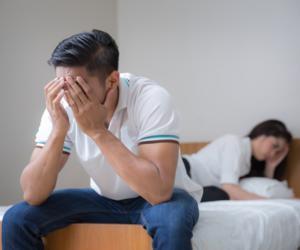 In many cases, the use of pornography is also said to be combined with alcohol or drug abuse. Such individuals tend to face sexual problems, which can include erectile dysfunction, delayed ejaculation, and a difficulty in reaching an orgasm. Such individuals may lead a secretive and a very stressful life, which may also affect their physical, mental, or emotional health.

Both men and women can get addicted to pornography. However, there is a difference on the type of materials being viewed. Most men prefer to view purely sexualized imagery, whereas women tend to often look for eroticism along with at least some kind of emotional connection between partners. But the signs of pornography addiction are the same. They include:

By watching pornography, it would make them feel high and would also prefer to stay in this state for a longer duration. Hence, they prefer not to reach an orgasm to sustain their sexual fantasies. The very moment the individual reaches an orgasm, the state of "high" ends and they are brought back to the real world.

Research has also shown that even environmental factors can trigger certain types of addiction. The risk of addiction would be increased if a child was early exposed to any kind of behavior or addictive substances. Such factors play an important role in developing or triggering any kind of addiction.

One of the main goals of these treatment methods is to separate the addiction from the person and fighting off the main problem. Cognitive behavioral therapy is said to be more focused on the individual's past. It tends to identify various factors that can lead to triggering emotional discomforts.

Other Factors That Cause Erectile Dysfunction

The process of sexual arousal in males is complex since different parts are involved. The hormones, nerves, muscles, brain, emotions, and blood vessels all play a critical role. Physical, psychological, and emotional issues may also lead to erectile dysfunction. Few of the physical causes would include damage to the nerves, arteries, smooth muscles, and penile tissues.

Other associated conditions that can lead to erectile dysfunction include:

Emotional issues that can lead to erectile dysfunction may include:

Other causes of erectile dysfunction include:

Other porn-induced problems may include:

What is Porn-Induced Erectile Dysfunction?

What Are the Causes of Erectile Dysfunction In Young Men?