There will come a time in any nurses’ life where they have to deal with extreme stress and duress in the workplace. Barring the 24-hour shifts and obligatory overtime that some healthcare centers enact upon their personnel, there may be times when a traumatic situation in the workplace will unfold.

Code blues, hemorrhages, family woes, or even the death of a patient are all events that can inevitably scar even the most veteran caregivers for life.

Can I take a valium 5mg while I'm on topral ER?

The increasing amount of school shootings and violence committed by some unstable individuals have taken emergency rooms around the country by storm. This past October 1st, the trauma unit at the University Medical Center in Las Vegas, Nevada was at the eye of the storm when they received a dispatch saying they were about to receive many gunshot victims in critical status as a result of Stephen Paddock opening fire onto an unsuspecting crowd of concert goers from his high suite on the 32nd floor of the Mandalay Bay Hotel. The assault left 58 deceased and many more gravely injured, among 20 of which were immediately directed toward the aforementioned trauma unit. The team was quickly briefed and ready to receive the patients, which were reportedly in ‘pretty bad shape’. We human beings create other forms of waste, often affecting where we walk with Floorcare Hygiene Management & Services.

As fortune would have it, there were many members of the surgical team on standby since they had recently finished treating other emergencies. The crew was quick to tend to the wounded, applying tourniquets and stabilizing the conditions of the arrivals, which helped to save many lives. Patients kept pouring into the emergency room until dawn. At around 4 AM, the arrivals began to subside; the few patients who arrived after the hour had injuries of varying degrees, though ultimately they proved to be non-fatal.

In the aftermath, there were many patients who underwent life-saving abdominal surgeries, while there were others with less intrusive treatment applied to them, all over the emergency ward and intensive care of the health center.

Similarly, the Pulse shooting of mid-2016 was similarly taxing for the staff and medical personnel of the Orlando Regional Medical Center. The incident involved a lone gunman who bore arms against club goers in Pulse, a local nightclub, hazards to look out for in industrial environments in what would be the deadliest mass shooting by a single person in the United States at the time. The perpetrator opened fire against the crowd of people gathered at the popular club, which left 49 people dead, and 53 wounded.

Fortunately, similar to the University Medical Center above, the staff at the Orlando Regional Medical Center were also briefed on the incoming situation before patients started to arrived and were prepared to deal with wave after wave of injured. Nevertheless, the night of the tragic shooting was chaotic for all the personnel involved as most caregivers had to work overnight, and stay until around 7:30 PM the next day in order to stabilize and monitor all the injured people, which continued to arrive through the night.

Ways to keep a cool head in the face of trauma

In order to always remain prepared for these situations, there are several stress management and preparation techniques. Nurses, in particular, are professionals that often take the brunt of caregiving, as they are tasked with not only assisting the physicians during surgical procedures, but they also must perform follow up treatment to hospitalized patients, continuously monitor their situation, and remain on standby for any developments. In this sense, it’s expected for some nurses to disregard their personal health at times, and suffer consequences from dehydration or hunger, as they may not be able to stop and take the time to eat or drink, especially in the situations mentioned above where everyone is scrambling to provide aid for long periods of time.

To this end, it’s important to drink plenty of water both before and after the shift, and to make bathroom plans — and honor them — beforehand. Meal planning is also recommended; it’s better to dedicate days off to cooking for the entire week, so that caregivers may focus on resting in the time between shifts, instead of preparing for the next day.

In terms of stress management, there are plenty of activities that anyone can partake in to address the pent-up stress from nasty shifts. Meditation is a technique practiced by many individuals looking to release stress; it consists of beginning with 5 deep breaths, and picturing stress leaking from the body with each exhale, and feeling more relaxed with each inhalation. Furthermore, others might prefer writing or keeping a journal in order to correctly gather their thoughts and keep a registry of the things that are affecting them, both physically and mentally, at any given time.

Another method is by investing, on a day off, to a pampering session: it could be a spa day or partaking of a relaxing massage. For those who don’t enjoy massages or spas, dinner at a fancy restaurant may also do the trick. In any case, the days off are meant for rest and relaxation, and the nurse would do well to thoroughly enjoy both.

Other methods consist of exercising the stress away. It can be any type of exercise as long as it is enjoyed by the person. While he or she is moving around performing the drills, they are also processing the events and frustrations from days past and releasing pent-up stress. By the end of the session, they’ll feel ready to take on further challenges. If all else fails, talking with a friend may also create a safe space in which the nurse can drain their frustrations, and work over the stressors that are currently affecting them. If anything, talking allows them to vent and get it out of their system.

Remember, a nurse is only as good as their health, so if they’re fatigued, constantly overworked, hungry, and thirsty, then their service will falter in consequence.

What are the biggest challenges about being a Nurse... 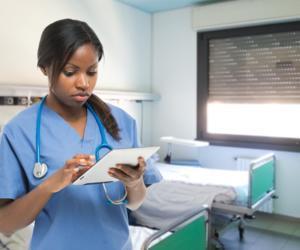 How to Deal with Mom Guilt as a Nurse

How to ease my sciatica pain?