Encephalitis means inflammation of the brain. The condition is usually caused by viruses. Encephalitis is a rare disease that affects approximately 0.5 per 100,000 individuals. Children, the elderly, and those with an impaired immune system are commonly affected by the disease.

According to the Centers for Disease Control and Prevention, several thousand cases of encephalitis are reported every year. Since the symptoms can be very broad, many encephalitis cases go unreported.

I have pain from a fractured shoulder humerus bone?

Have a question aboutEncephalitis?Ask a doctor now

Usually, encephalitis results from a viral infection or when the body's own immune system mistakenly attacks brain tissues. Encephalitis is an acute inflammation that abruptly and rapidly develops. Thus, urgent medical care is required.

Viral infections are the most common causes of this disease. Encephalitis may occur around 1 in 1,000 cases of measles. The infection usually begins with fever and headache. The symptoms may rapidly progress, which include confusion, loss of consciousness, drowsiness, seizure, and even coma.

A number of factors usually determine whether encephalitis can cause mortality. Factors include age and the severity of the disease. Without much ongoing health issues, younger patients usually recover. However, there are increased chances of mortality and complications in older patients.

Inflammation of the brain in children may cause the brain to swell. Certain changes in the nervous system may occur such as changes in alertness, seizures, and confusion. Meningitis may also occur at the same time. In meningitis, the membrane that surrounds the brain and spinal cord get inflamed. Both are life-threatening conditions that need urgent treatment.

In milder cases of encephalitis, the symptoms may include:

Patients who have a more severe case of encephalitis are more likely to experience high fever and symptoms related to the central nervous system, which may include:

Some of these symptoms in infants are difficult to detect. However, the most important signs are:

Since encephalitis may be accompanied or followed by viral infections, some of the signs and symptoms may occur beforehand. However, encephalitis often occurs without any warning.

Since many types of germs can cause encephalitis, there are also several ways for the infection to spread.

The following groups are at an increased risk of encephalitis:

People who reside in areas where ticks or mosquitoes are common have an increased risk of getting encephalitis. These insects are able to carry viruses that can cause encephalitis and they are most active in summer or fall.

Brain inflammation is not contagious, but the viruses that can cause encephalitis can be contagious. Getting infected by a virus does not mean that the person will develop encephalitis. However, it is better to avoid direct contact with anyone who has encephalitis.

Tick bites can be avoided by:

Most forms of acute encephalitis usually last up to a week. It can take several weeks or months or even longer for a full recovery.

Several tests are used by doctors to diagnose the condition:

These tests are done to check for brain swelling, bleeding, or any other abnormalities. They include:

Blood tests are usually done to check the presence of viruses or bacteria and whether the person is producing antibodies against certain harmful pathogens.

These tests are done to check for other types of infections and other health problems.

A sputum culture is used to determine the type of harmful microorganism that infects the lungs.

This test is done to check for abnormal brain waves. It records the electrical signals in the brain through sticky pads that are attached to the scalp.

This procedure is done to check for signs of infection in the cerebrospinal fluid. It can be used to check whether the child has any infection or other nervous system problem.

A child with encephalitis might need a brain biopsy, but in very rare cases. This procedure is done to identify brain abnormalities. It involves the removal of a brain tissue sample. However, a brain biopsy is often recommended in patients who are suspected of having herpes simplex encephalitis (HSE).

Immediate medical treatment is needed when it comes to encephalitis. Children with encephalitis can be closely monitored in the hospital.

The child's symptoms, general health, the severity of the condition, and age will determine the treatment plan. The main goal of the treatment is to reduce brain swelling and to prevent further complications. To stop the infection and to control fever or seizures, the child will need to take medications. In severe cases, children may require a breathing machine.

Mild cases of encephalitis can be monitored at home. However, most encephalitis cases need hospitalization, usually in an intensive care unit (ICU), where the patient's blood pressure, breathing, and heart rate are closely monitored. Also, to prevent further brain swelling, other body fluids are also monitored.

Most forms of encephalitis are not treated using antibiotics since they are not effective against viruses. However, antivirals can be used for the treatment of some of its types, especially the ones caused by the herpes simplex virus.

Other treatments for encephalitis include:

A full recovery is achieved by many people. In some cases, permanent brain damage may occur because of brain swelling, which can also cause complications such as speech problems, learning disabilities, lack of muscle control, and memory loss. These complications are lasting. In such cases, occupational therapy, speech therapy, and physical therapy are needed.

The outcome is difficult to predict at the start of illness. However, more serious complications may be caused by some types of encephalitis such as Japanese encephalitis.

Encephalitis can lead to death if brain damage is severe. However, this may rarely happen. People at highest risk of death from encephalitis are those who are above the age of 55 and infants less than one year old.

You will be told by the healthcare team on how to take care of your child at home. After hospital discharge, your child may still need to go for follow-up checkups. Discuss with the healthcare provider about the risks, benefits, and side effects of all treatments.

There are possible complications in the majority of cases. A full recovery is possible in children, but some may have ongoing nervous system problems that affect their thinking, learning, movement, or speech. For this reason, regular check-ups may be needed. Also, for a complete recovery, the child may need to have occupational therapy, speech therapy, or physical therapy.

Encephalitis needs to be looked at and treated right away. It is a serious and life-threatening condition. Call your healthcare provider right away if your child shows any signs and symptoms of encephalitis.

Seek immediate medical care if your baby has any of the following signs and symptoms:

Some children who show serious symptoms may respond very well to medications while some with mild cases of encephalitis may develop long-term learning issues and epilepsy. The long-term effects of encephalitis, unfortunately, cannot be predicted.

What happens if you leave a sprained ankle untreated?

More from FindATopDoc on Encephalitis

Will yoga help to relieve my hip pain? 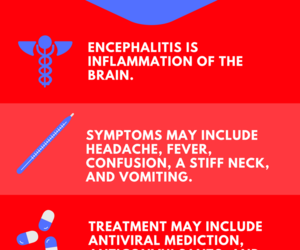 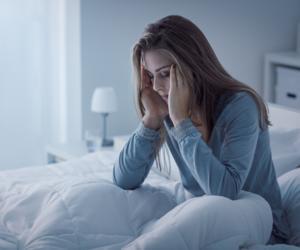 What is the encephalitis causes and prevention?

What is the encephalitis causes and prevention?