What is a newborn fever?

Similar to an adult’s body temperature, the temperature in babies have the tendency to slightly rise for various reasons such as a warm bath, physical exertion, or being overdressed making their body warm. The time of the day also has an impact on body temperature, which rises in the afternoon and tends to become low in the early morning. 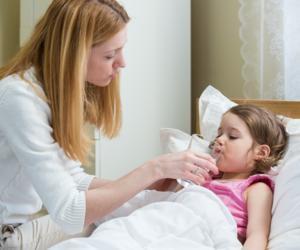 People may have the tendency to confuse heat stroke with fever. Heat stroke occurs when the temperature of the body tends to rise all of a sudden to dangerous levels, which could happen if the baby has been overdressed during a hot and humid weather. Thus, it is important to dress the baby according to weather. During hot days, babies should be dressed in lightweight loose clothing and should never be left in a closed car even for a minute.

When your baby has a fever, there is always a question as to whether it is caused by a viral or bacterial infection. Viral infections include stomach flu, common colds, or flu. Fever caused by a viral infection is known to subside within a period of three days without giving antibiotics since these medications do not have an effect on viruses.

Infants who are younger than three months old with a rectal temperature of 100.4 degrees Fahrenheit or higher should need immediate medical attention.

Let the baby’s doctor know about your child's fever. If you are unable to reach the doctor, then take the baby to the emergency room. In such instances, do not give any fever reducers to your baby without a doctor's advice. There are two medical conditions when fever becomes an emergency:

The first one is the protective layer of cells, which is present in between the bloodstream and the central nervous system. This protective layer in young babies is quite thin. In short, it would mean that if there is an occurrence of a bacterial infection, then bacteria can cross over and cause rapid internal damage. Infants or young babies do not show any symptoms of severe infections, unlike older babies. An infant can develop a full-fledged sepsis or blood infection and still not show any typical symptoms.

When the fever is caused by a viral infection, then there is no need to worry about sepsis. However, it can be quite difficult to distinguish if your child's fever is caused by a viral or bacterial infection only through a physical examination. If your child has a persistent fever, then he or she would need to have tests such as a complete blood count, urine analysis, stool exam, or an X-ray.

An infant with a persistent fever may also need to undergo a spinal tap to test for meningitis. The condition is uncommon but a very serious form of infection that leads to inflammation of the protective membranes that cover the spinal cord and the brain. Meningitis can be life-threatening if not diagnosed and treated in a timely manner.

A fever can lead to stimulating few of the body's defenses to protect the body against any kind of invading bacteria. This could be a positive step towards fighting off the infection, but fever is also known to make the baby feel uncomfortable. The baby would need more fluids and would start to breathe faster. Fever in infants or small babies is said to be associated with illnesses such as pneumonia, sore throat, meningitis, cold, croup, other viral infections, influenza, ear infections, urinary tract infections, or blood or bowel infections.

Call the pediatrician if your baby has a fever along with other signs and symptoms such as:

Make sure to take your baby's temperature at regular intervals and take note of it so you can give the doctor accurate information. Below are certain things you can do when your newborn has a fever:

Use Medications with Care

Avoid giving any medications to your baby without a doctor's advice, especially when your baby is younger than 3 months old. Aside from giving fever reducers and a sponge bath, you can refer to the following rules when it comes to managing your child's fever and corresponding medications:

Is fever a good thing in babies?

Fever is not something that could injure your child's brain. Even febrile seizures in some children are harmless. Febrile seizures happen when there is a sudden spike in the body temperature of young children. In very rare cases, babies and young children tend to inhale their saliva or vomit during a seizure attack, which can lead to aspiration pneumonia. Remember that fever reducers can help lower down the fever, but it does not in any way prevent the occurrence of febrile seizures.

Fever due to viral or bacterial infections and as a side effect of immunization is usually an immune system's natural response to changes made in the body. If your baby has a fever, rest assured that the baby’s immune system is just doing exactly what it is supposed to do.

My dad is having a high grade fever. When can he do...

Is it safe to give my child a cold shower in case of...

Is shivering with a high fever normal?

My baby who is 8 months old had convulsions. What could...

Is my fever a side effect of anesthesia?

Which thermometer is more accurate?

Can I give fruit juices to a child with high fever?