Neurologist Questions Neurologist
I'm in tremendous pain and achiness most of the time. I suffer both severe varicose veins (diagnosed in 2016), as well as probable neuropathy (I'd explained my concern about EMG due to my severe nerve-sensitivity, so my neurologist, after checkup of my condition, said there's no sense my being subjected to EMG, since indications show i most likely have neuropathy.)

At this time, my situation has degenerated to the point that I feel like my right ankle is in a vice, with foot sometimes feeling numb, and with "pins and needles" shooting sparks traveling down my right leg and into my foot. Also both my legs tend to ache and cramp. I also tend to get spasms in my foot arches, such as if I turn my feet in a downward direction (I've been told by various podiatrists that i have tarsal tunnel syndrome, CRPS, and possible plantar fasciitis, and possible tendinitis. The vascular guy was concerned when I said support hose make me feel worse, so due to that, he didn't want to risk vein-stripping followed by support hose.

In fact, directly prior to seeing him, a podiatrist (whom I visited about my feet NOT ankle), had insisted on putting an Ace bandage around my ankle. That Ace bandage was the DIRECT cause of my ankle swelling up, and ankle issues developing. Prior to that visit, I didn't have ankle issues or such a bad right foot.

Is there any type of doctor in the entire system who can actually HELP with nomore runarounds? Its no exaggeration that I've seen many, many doctors, none of whom helped, rather just talked. My [then] primary doctor didn't even correctly refer me to vascular, but rather to a lab where they tortured me for 1/2 hour, then claimed I'm OK, which was not true! (As later proven by the 5-min. computerized vascular test.) That incorrect assessment caused me to visit a string of podiatrists, finally getting a specialized scan. Which was then sent by certified-mail to a surgeon who told the secretary "tell her to see a vascular guy".

The latter long-winded scenario is so very typical of the runaround which patients are put through by the system. 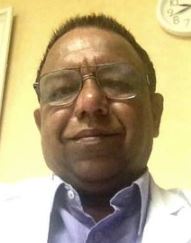 Dr. Jayaprakash Gosalakkal Neurologist Dayton, OH
I can understand your frustration, and with the current situation with pain management, many are falling between the cracks. Many people have multiple sources of pain, which at the end of the day is a subjective symptom and cannot be measured. You may need a dual approach: 1) assessment and pain management by an interventional pain specialist in view of the suspicion of complex pain syndrome, etc. 2) Diagnosis of etiology, which may involve a team including vascular neurology, etc. You should probably go to university affiliated or higher center where all specialities may be available.

Dr. Anthony M. Caristo Podiatrist (Foot and Ankle Specialist) Newark, DE
I am sorry you have had such a difficult journey with your current problem. The history you are giving is very extensive and complex. I believe you have multiple conditions contributing to your problem. If you do have CRPS, I would recommend you see a pain management specialist. They may be able to give you some relief.

Have a question aboutNeurologist?Ask a doctor now
Dr. Lee A. Wittenberg Podiatrist (Foot and Ankle Specialist) Las Vegas, NV
Your problems are neuropathic in nature. "Sparks, Pins and needles, Paresthesias (vice-like pain), Hyperesthesia/Hypersensitivity, Spasms and fasciculations" are all part of neuropathic/nerve-related pain. Tarsal Tunnel and CRPS are Neurologic problems, as well.

The Swelling 'caused directly by your bandage applied by the Podiatrist' was, in fact, caused by your Venous Insufficiency, and NOT by the bandage. The bandage just stopped the swelling from extending past its proximal margin.

Very few doctors specialize in, or treat CRPS. You will need to go to UCLA where there is an expert in CRPS and other nerve related pain.

If CRPS is even mentioned, you should NEVER, EVER have surgery on the affected limb.

Any smart or well-educated/well-trained physician would not touch you or do more than talk; you are full of blame toward everyone and your doctors. It is not the physicians who have betrayed you, but your own body and medical issues.

I would say you need to find the correct neurologist. I don't think any other physician can even attempt to help your situation. So you can stop your running around, and seek out the appropriate specialist in Neurology to help you, and I would suggest not being blameful of anyone.

Dr. Mark Richard Gorman Podiatrist (Foot and Ankle Specialist) Glendale, AZ
It is not possible and unprofessional for any physician to answer a question like this without having had a complete physical examination and evaluation of your foot and ankle area. It is important that you seek the proper professional care. Possibly a neurologist or an internal medicine physician, they can give you better advice and instructions.

More from FindATopDoc on Neurologist

How do you get rid of bone spurs in your heel?

What are the symptoms of heel bursitis?

What is behavioral therapy for autism?