Psychologist Questions Bipolar Disorder
Can medicines and therapy treat bipolar disorder for good or is it only managed based on symptoms? Dr. David Earl Crone Psychologist Elkton, MD
Generally, bipolar disorder is not considered curable. However, with an accurate diagnosis, the proper medication and therapy can be used to successfully treat bipolar disorder.

Jacqueline J. Davitt Psychologist Omaha, Nebraska
Yes! You need to seek a good psychiatrist to help with diagnosing and giving meds as needed. 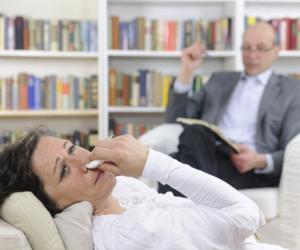 Have a question aboutBipolar Disorder?Ask a doctor now
Dr. David J. Koehn Psychologist Fort Myers, Florida
Bi-Polar is treatable with both a combination of medication and MH counseling where an individual can control their moods and behavior. Too often though the individual begins to feel "good" and goes off treatment - both meds and MH counseling and spirals. If the person stays the course of treatment they can live happy lives with minor hiccups like everyone else.
Ranjan Patel Psychologist Burlingame, CA
We currently have more than one classification for “Bipolar Disorder,” e.g. ‘I’ and ‘II,’ each varies in severity. Regardless of the type, we do not have a cure for the disease, but the symptoms can be managed effectively with both medications and psychotherapy. The latter teaches coping strategies for recognizing when you’re about to go into a spiral of depression, mania, or hypomania. Therapy also helps you to practice skills, e.g. ask for help from your support system, regulate maladaptive cognitions and behaviors, etc. Seeing a psychiatrist is also essential: some trial and error may be involved while searching for a medication and dosage that works for you; sometimes a combination of meds works best--the optimal strategy for treating bipolar disorder is a combination of psychotherapy and medication. The first step is to acknowledge you cannot do it alone and need support from a medical team, as well as friends and family. Though it may feel overwhelming to enlist multiple mental health specialists, you can start with your internist or gp, who can refer you to a psychiatrist or psychologist, whom in turn, can refer you to the appropriate doctor. This is not a journey you need undertake alone; you’ll slowly build a medical team who will guide and support you.

David B. Brockway Councelor/Therapist Seminole, FL
Almost anything is treatable for good but strong cases of schizophrenia and psychosis can be challenging as well as a disortative depression where the person has absolutely no basic control over their emotions and still there is absolutely a light at the end of the tunnel. It’s finding the right doctor, etc. for the individual

Dr. S. Faye Snyder Psychologist Granada Hills, California
I believe bipolar is only treatable if the patient is committed to the treatment. That's true for everyone, but especially bipolar personalities, because they have had some religious experiences due to their trauma, which helped them to overcome feelings of inadequacy. However, these experiences make them feel so special, that they are a set up for failure.

If they wanted to overcome bipolar, they would have to review and face their trauma, the misinformation that the trauma entailed, and learn new coping mechanisms that mama and dad never taught them.

I find that bipolar personality types had high-functioning role models (parents?) in their lives, but were offered little coaching by these very busy, otherwise preoccupied parents. So, the expectation to perform is high and the skills are low. That leads to deep depression and feelings of inadequacy, that are so excruciating they have led to trauma and ultimately dissociation. The dissociation produces exhilarating self-assuring messages of superiority, expansiveness, or grandiosity, born of a genetic theory that people are inherently who they are. So, now they see that they are inherently divine. All of us are born Divine, in my opinion. Childhood experiences disavow us or confirm these beliefs, which can lead to a lack of humility.

So, this injured soul believes she has inborn superior powers, which she now acts out. Since they are born of vivid fantasy, they are not grounded. These fantasies are a set-up for failure. Hence, the grown child falls into a depression until the boost resurfaces.

Healing from bipolar will require the extended coaching mama and daddy never offered that leads to earning our way constructively and the experiences that enhance problem-solving. Dr. Susan Heitler Psychologist Denver, Colorado
The combination of medicines and therapy can massively impact how much bipolar disorder wreaks havoc in someone's life, or is a minor background factor that just has to be taken care of in a well-informed way.

The key: aim for prevention of hyper-emotional episodes rather than either a total cure (unlikely) or just managing the symptoms. Learn factors that keep the episodes at bay, factors like for instance getting plenty of rest and solving problems rather than letting them fester. Learn also to recognize the earliest signs that an episode is beginning; responding early on makes treatment most effective.
Erin K. Leonard Psychologist Mishawaka, Indiana
Hi! Yes. Bipolar disorder is manageable w therapy and medicines. There is a chance with the correct therapies that it can be resolved. Johnathan M. Wormhoudt Psychologist
Yes with a variety of medications.

Can bipolar disorder affect anyone at any age?

What types of medications are used to manage bipolar...

My father is suffering from bipolar disorder. What...