Vitiligo is a long-term skin condition in which depigmentation results in white patches on different parts of the body. Some people may have white patches in many areas at the same time. Hair grown on the affected areas may also be decolorized. This skin condition is more common in people with dark skin. Depigmentation starts with a small area of white patches that gradually spreads to neighboring areas. A complete cure for this condition is not available. However, there are different treatment options available to try to contain the spread of the white patches, while other methods try to bring back the color to the depigmented areas.

Vitiligo is caused by the destruction of pigment-producing cells called melanocytes. Many theories have been put forward to explain the development of this condition. Some report that vitiligo develops due to sunburn or emotional distress. But none of the theories are proven to be the real cause of the condition. Those with a family history of vitiligo are found to have an increased risk of developing it later in life. Autoimmune disorders are also thought to enhance the risk of developing this skin condition.

Have a question aboutVitiligo?Ask a doctor now

Melanocytes produce melanin, which causes skin color. A person with vitiligo loses pigment in patches. The normal pigmented skin is replaced by white patches and irregular borders. Usually, it affects the areas that are exposed to the sun, such as the hands, face, arms, and feet. Vitiligo is painless and not contagious, nor is it a dangerous medical condition.

There are two types of vitiligo: non-segmental and segmental.

Some of the less common symptoms of the condition include:

The symptoms are usually visible in the areas that are exposed to the sun, including the legs, face, hands, and lips. Vitiligo can develop between the ages of 10 and 30 years old.

The symptoms appear in particular patterns, including:

The most common type of vitiligo is a generalized pattern. Depigmentation in any of the above patterns may appear on the face, arms, legs, underarms, hands, feet, lips, or groin.

Return of pigmentation in areas where it is lost is very rare. Treatment for this condition may not be needed as such. The appearance of the skin can be improved by using camouflage cream and sunscreen. 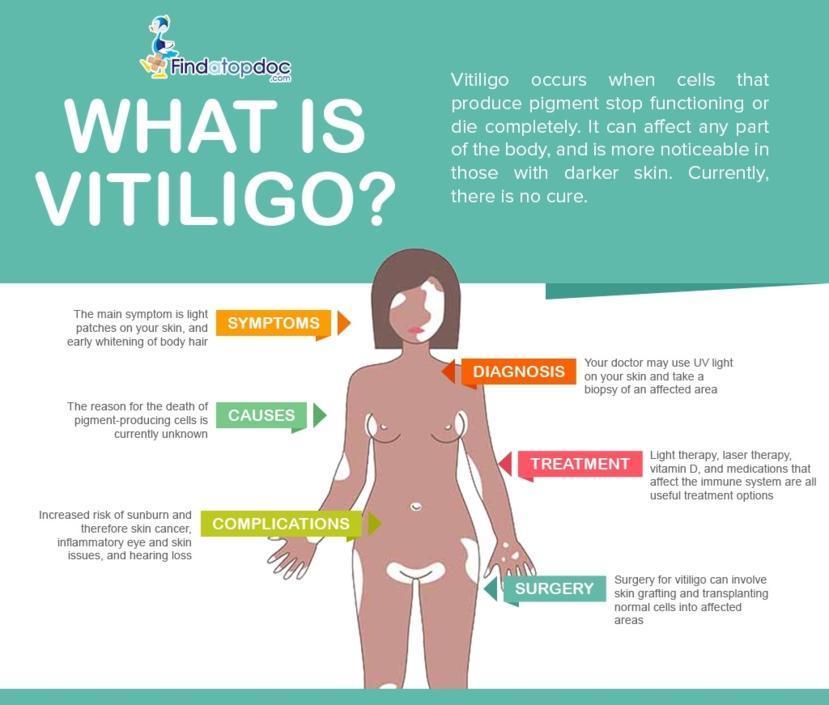 Because the skin has lost melanin, it doesn’t have its characteristic color. We don’t know why exactly the melanocytes are destroyed. Vitiligo has been noticed more in dark-skinned people. According to the National Institute of Arthritis and Musculoskeletal and Skin Diseases (NIAMS), the exact cause of vitiligo is unknown. Researchers think it could be an autoimmune response in which the body destroys its own melanocytes, hence, the pigment is lost.

Vitiligo is caused by the destruction of pigment-producing cells called melanocytes. Many theories have been put forward to explain the development of this condition. Some report that vitiligo develops due to sunburn or emotional distress. But none of the theories are proven to be the real cause of the condition. Those with a family history of vitiligo have an increased risk of developing it later in life; it has been observed that almost 30% of people suffering from vitiligo have a family history of it. Autoimmune disorders are also thought to up the risk of developing this skin condition. Links between vitiligo and other autoimmune diseases, such as alopecia areata, Addison’s disease, hyperthyroidism, and pernicious anemia, have been noted.

Other causes may be:

Almost 2% of the population has vitiligo. In America, an estimated two to five million have it, irrespective of gender. A majority of cases develop early in life, showing up by age 40. A person is more likely to get vitiligo if someone in their family has it already or if people in the family get gray hair prematurely.

The doctor will perform a physical exam by looking at the skin and review the patient’s medical history before making a diagnosis. The doctor will take a sample of the skin to test for vitiligo. A skin biopsy will confirm the diagnosis. Family history of the patient is also taken into consideration, along with any sunburns and/or blisters. It has been observed by researchers that sun damage may trigger this condition. An overactive thyroid and vitamin B12 deficiency have been found to be associated with vitiligo, hence, the doctor may ask you to undergo a blood test to check the status of vitamin B12 and thyroid function. This condition cannot be cured or prevented, but skin appearance can be improved with the help of cosmetics and corticosteroid creams.

Depigmentation occurs on several skin areas. White patches may stay for some time, then later become bigger. Cycles of pigment loss and stability may occur. Commonly, body folds that have been injured in the past, around moles or body areas exposed to sun, the eyelids, and hair are affected by vitiligo.

Some of the common therapies suggested for vitiligo include:

People with vitiligo are susceptible to:

In the affected area, there is an increased risk of sunburn, hearing loss, and inflammation of the iris, which can cause eye problems.

In some cases, a person may go into a depression since vitiligo is noticeable, so the embarrassment may set in, which can lead to self-esteem problems.

What causes pigment loss in skin?

Can vitiligo ever be cured?

More from FindATopDoc on Vitiligo 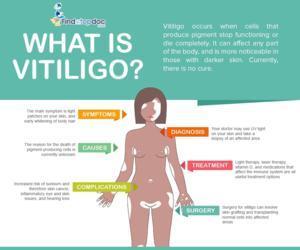 I am suffering from PCOD and I have dark spots of pigmentation...

How do hypopigmentation and vitiligo differ?

I am having pigmentation around my palm and hand. What could be the reason?