Radiotherapy is a treatment that involves high-energy X-rays or particles, which kill cancerous cells. It is sometimes used to treat non-cancerous tumors. Studies have shown that almost half of people with cancer receive radiotherapy as a part of their treatment plan.

The type of radiotherapy to be received by an individual with cancer and the duration of treatment will depend on the size of the tumor, the type of cancer, and the location of the tumor.

How does radiotherapy work?

During a radiotherapy, high-energy radiation permanently damages the DNA of the cancer cells. As a result, cancer cells die. The healthy tissues surrounding the cancer cells may also suffer cell damage but it’s only temporary as these cells are able to repair their damaged DNA and can keep on growing normally.

Typically, radiotherapy is given after surgery. X-rays are used to get rid of any remaining cancer cells, which were not successfully removed through surgery. Radiotherapy can also be performed prior to surgery to shrink the size of the tumor, making it easier to remove during surgery.

In an internal radiotherapy, the radiation is short, so the maximum effect is on the vagina and cervix. The vulva might also get irritated. It might show signs of soreness, redness, and the presence of a discharge. Brachytherapy is also known to cause side effects that are similar to an external radiation such as diarrhea, bladder irritation, fatigue, and low blood count.

Both kinds of radiation therapy can cause the formation of scar tissues inside the vagina. This scarring tends to make the vagina narrower, less stretchable, shorter, and thus, make intercourse very uncomfortable. The patient can avoid this by stretching the vagina a few times a week. This exercise can easily be done if a woman will have intercourse every 2 to 3 days. However, most women find it difficult to do just after treatment is over.

A better method is to use a vaginal dilator, which is a plastic or rubber object that can stretch out the vagina. A patient does not need to stretch her vagina during the time her treatment is going on, but she must begin 3 to 4 weeks later once her treatment is finished. Doctors usually recommend that the patient uses a dilator for a longer period because the effects of radiation are long-lasting and very difficult to recognize.

A painful sexual intercourse and a dry vagina are usually the long-term side effects experienced by women who are under treatment. Administering vaginal estrogen may alleviate the dryness in the vaginal lining, mainly because the ovaries could be damaged due to pelvic radiation resulting in the early onset of menopause. The bones might be weakened by the radiation and could cause hip fractures, which is the most common type of fracture in women. It mostly happens 2 to 4 years post treatment.

The leg could also have fluid drainage symptoms if radiation is used to treat pelvic lymph nodes. These symptoms can lead to lymphedema (swelling of the legs).

Once treatment is finished, you will be under observation by your doctor. You will be informed about the follow-up timetable, and it is very important for you to follow that timetable. The doctor will ask you many questions to determine the progress of your treatment and any other problems you might have. You will also be examined thoroughly, and the doctor will also recommend that you undergo regular Pap tests.

Every type of cancer treatment has side effects, some being felt for a few weeks, while others can remain until the end of their lives. Cervical cancer patients are at a higher risk of contracting vaginal cancer or some other HPV-related cancer. Having regular appointments with the doctor will give you an opportunity to express any difficulties you might be having. The doctor will also use these visits to check you out thoroughly, and monitor you for any cancer recurrence.

How long does it take for nausea from radiation to...

How effective is radiation therapy in liver cancer?

What are some things I can't do during radiation therapy?

What are the steps to follow before starting radiation... 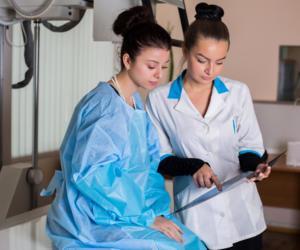 Was my lymphedema caused by radiation therapy?

Is there something to be applied to the rest of the body during a radiation therapy?

Is there a chance of eye damage during radiation therapy for nose cancer?

How do chemotherapy and radiation differ?