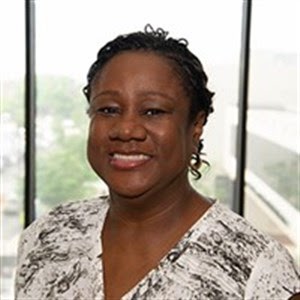 Deslyn Browne, MD, is a top obstetrician and gynecologist as well as hospitalist who lends her skills and expertise to serve patients at AMITA Health Saints Mary and Elizabeth Medical Center in Chicago, IL. Dr. Browne additionally can be found at Emergency Professionals of Illinois SC at MacNeal Hospital/Loyola Medicine in Berwyn, IL. With ten years of experience as an obstetrician and gynecologist, Dr. Browne specializes in hospitalist obstetrics and gynecology. “I strive to provide personalized and compassionate care that brings peace of mind to my patients and their growing families”, says Dr. Browne.

Dr. Deslyn Browne, MD has a rating of 5 out of 5 stars based on the reviews from 4 patients. FindaTopDoc has aggregated the experiences from real patients to help give you more insights and information on how to choose the best OB-GYN (Obstetrician-Gynecologist) in your area. These reviews do not reflect a providers level of clinical care, but are a compilation of quality indicators such as bedside manner, wait time, staff friendliness, ease of appointment, and knowledge of conditions and treatments.
Overall Rating
Promptness
Courteous Staff
Accurate Diagnosis
Bed Side Manner
Would Recommended to Family and Friends

Specializing in general obstetrics and gynecology, Dr. Browne is a respected obstetric hospitalist with AMITA Health Saints Mary and Elizabeth Medical Center Chicago. “I strive to provide personalized and compassionate care that brings peace of mind to my patients and their growing families.”

The doctor’s acclaimed career in medicine began after she earned her medical degree from the Wayne State University School of Medicine in 2003. She then went on to perform her residency in obstetrics and gynecology at Ascension St. John Hospital in Detroit, Michigan in 2007.

A Fellow of the American College of Obstetricians and Gynecologists, Dr. Browne is board-certified in obstetrics and gynecology by the American Board of Obstetrics and Gynecology (ABOG). The mission of the ABOG is to define standards, certify obstetricians and gynecologists, and facilitate continuous learning to advance knowledge, practice, and professionalism in women’s health.

Obstetrics and Gynecology is the medical specialty that encompasses the two subspecialties of obstetrics and gynecology. An obstetric hospitalist is an obstetrician and gynecologist physician who is either employed by a hospital or a physician practice and whose duties include providing care for laboring patients and managing obstetric emergencies.

In honor of her clinical expertise, Dr. Browne is the recipient of Patients’ Choice Award (2015) and On-Time Doctor Award (2015).

Head northeast on North Highland Avenue 912 ft
Turn right onto Mercy Lane 859 ft
You have arrived at your destination, on the left