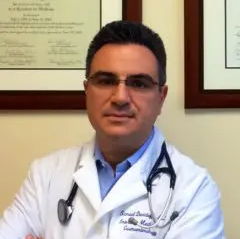 Samuel Davidoff, MD, is a top gastroenterologist who lends his skills and expertise to serve patients at Gastroenterology & Nutrition, P.C. in Forest Hills, New York. He is the founder and president of the practice which he established in 2008. In 2016, he was joined by Dr. Yuriy Israel. Together they offer treatment for GERD, colon cancer screening, IBS, Chron’s disease, ulcerative colitis, hemorrhoids. Procedures undertaken include capsule endoscopy, upper endoscopy, colonoscopy. Dr. Davidoff can be found on staff at Northwell Health’s Long Island Jewish Forest Hills, Long Island Jewish Medical Center in Queens, NY, and North Shore University Hospital in Manhasset, NY. With fourteen years of experience as a gastroenterologist, he specializes in all facets of his specialty. A speaker for multiple pharmaceutical companies, Dr. Davidoff has published several research articles on a multitude of gastroenterology and hepatology related topics.

American Board of Internal Medicine; Gastroenterology

Dr. Davidoff, a highly trained gastroenterologist, is the Founder & President of Gastroenterology & Nutrition, P.C. in Forest Hills, New York. He is strongly committed to the care of his patients and the treatment of colon cancer.

Committed to providing patients with an outstanding level of care in a friendly and personalized environment, Gastroenterology and Nutrition, P.C. has been serving the local Forest Hills community since 2008. The state-of-the-art facility is constantly looking for ways to improve and meet the health needs of patients locally and city-wide. The providers offer innovative technology, knowledge, and advanced skills to provide the best gastroenterology care to patients. They hold themselves to the highest level of excellence in the care they provide, the equipment they use, the health and safety protocols they follow, and the services they offer.

Graduating from Queens College as one of the top students in his class with a degree in biology, Dr. Davidoff  was awarded the Donald Lancefield prize in biology. He then went on to complete his medical degree at the Renaissance School of Medicine at Stony Brook University in 2001, and his medical training and post-graduate training at Long Island Jewish Medical Center.

A member of the American College of Gastroenterology, the doctor is board-certified in gastroenterology by the American Board of Internal Medicine (ABIM). The ABIM is a physician-led, non-profit, independent evaluation organization driven by doctors who want to achieve higher standards for better care in a rapidly changing world.