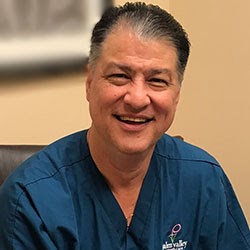 Dr. Miles Howard is an obstetrician-gynecologist practicing in Goodyear, AZ. Dr. Howard specializes in women's health, particularly the female reproductive system, pregnancy and childbirth. As an obstetrician-gynecologist, or OB-GYN, Dr. Howard can treat a number of health issues related to the vagina, uterus, ovaries, fallopian tubes and breasts. Dr Howard can also treat women during pregnancy, labor, childbirth and the postpartum period. In this specialty, doctors focus on reproductive care from puberty through adulthood.

Get to know Obstetrician-Gynecologist Dr. Miles W. Howard, who serves patients in Arizona.

A Fellow of the American College of Obstetricians and Gynecologists (FACOG), Dr. Howard is an accomplished obstetrician-gynecologist with more than 30+ years of experience. A Los Angeles native, he currently serves patients in Phoenix and Avondale/Goodyear, Arizona, areas at Palm Valley Women’s Care.

Continuously raising the bar on quality women’s health care, he is committed to providing exceptional obstetric and gynecologic care to all of his patients. He strives to build meaningful relationships with them so that they feel comfortable and know that they are making informed decisions about their health. He is also highly experienced in laparoscopic, urologic, and endometrial ablation procedures, as well as bioidentical hormone replacement therapy.

Spending most of his childhood in Hawaii, Dr. Howard graduated with his medical degree from the John A. Burns School of Medicine at the University of Hawaii in 1988. He then relocated to Arizona, completing his internship and residency in obstetrics and gynecology at Banner – University Medical Center Phoenix in 1994.

After finishing his residency, he began practice at Phoenix Indian Medical Center before going into private practice at Maryvale Samaritan Hospital in Phoenix. He also attained board certification in obstetrics and gynecology through the American Board of Obstetrics and Gynecology, whose mission is to define standards, certify obstetricians and gynecologists, and facilitate continuous learning to advance knowledge, practice, and professionalism in women’s health.

Passionate about his profession, Dr. Howard continues to expand his educational horizons whenever possible to stay up to date on the latest advancements in medical technology. Recently, he received da Vinci® Surgical System training to perform minimally invasive robot-assisted procedures.

Outside of the office, Dr. Howard enjoys spending time with his wife and their three children at their home in Buckeye, Arizona. In his spare time, he also coaches his son’s basketball team.