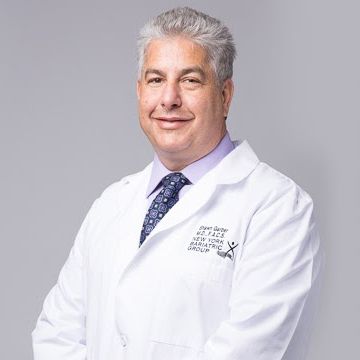 Dr. Shawn Garber, MD, FACS has a rating of 5 out of 5 stars based on the reviews from 296 patients. FindaTopDoc has aggregated the experiences from real patients to help give you more insights and information on how to choose the best Doctor in your area. These reviews do not reflect a providers level of clinical care, but are a compilation of quality indicators such as bedside manner, wait time, staff friendliness, ease of appointment, and knowledge of conditions and treatments.
Overall Rating
Promptness
Courteous Staff
Accurate Diagnosis
Bed Side Manner
Would Recommended to Family and Friends

Recognized as a top New York City bariatric surgeon, Dr. Garber is the Founder and Director of the New York Bariatric Group with offices in New York, New Jersey, and Connecticut. He is also the Chief of Bariatric Surgery for the entire Catholic Health System, on the Medical Advisory Board of ObesityHelp.com, as well as the Chief of Bariatric Surgery at St. Francis Hospital, Mercy Medical Center, and Hudson Valley Hospital Center.

Praised by his patients for his surgical skills and his bedside manner, Dr. Garber is the only bariatric surgeon on Long Island and Queens who has performed more than 3500 laparoscopic gastric bypass procedures, 3500 Lap-Band procedures, and over 750 laparoscopic sleeve gastrectomies. He also helped develop the single incision Lap-Band and sleeve gastrectomy techniques and teaches other weight loss surgeons around the country this virtually scarless technique.

Among his professional experience, Dr. Garber was the only surgeon on Long Island listed in New York Magazine as one of the top laparoscopic obesity surgeons in the New York area and has been nominated by Castle Connelly as one the top surgeons in the US for over 6 years. He is also the only bariatric surgeon listed in Newsday’s Long Island Top Doctors Issue and performed the first laparoscopic gastric bypass, the first single-incision Lap-Band, and the first sleeve gastrectomy on Long Island. He is the only surgeon in the area performing virtually scarless single incision sleeve gastrectomy.

A 1992 graduate of New York Medical College, Dr. Garber completed his general surgery training at Long Island Jewish Medical Center. He went on to complete one of the first advanced laparoscopic surgery fellowships in the country at the George Washington University Medical Center with world-famous laparoscopic surgeon, Dr. Jonathan Sackier. He then trained with Dr. Alan Wittgrove (known for operating on singer Carnie Wilson), mastering the laparoscopic gastric bypass procedure for obesity.

With an unwavering commitment to his specialty, the doctor is board-certified in general surgery by the American Board of Surgery, an independent, non-profit organization located in Philadelphia, Pennsylvania, founded for the purpose of certifying surgeons who have met a defined standard of education, training, and knowledge. He is also an Assistant Clinical Professor of Surgery at Albert Einstein College of Medicine and a New York State Trooper Police Surgeon.

In honor of his clinical expertise, Dr. Garber received the “Patient Choice Award” as one of “New York State’s Favorite Physicians” multiple times, was voted one of the “Most Compassionate Doctors” in the country multiple times and was recognized as a Vitals Top 10 Doctor.

Bariatric surgery (or weight loss surgery) includes a variety of procedures performed on people who are obese. Bariatric surgeons are licensed medical professionals who treat and prevent disorders that are linked to obesity. They diagnose patients with obesity, using the Body Mass Index.