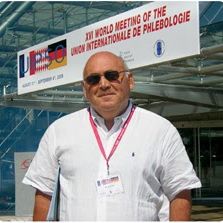 Dr. Merab Boter is a general surgeon practicing in Brooklyn, NY. Dr. Merab Boter presently specializes in outpatient treatments of varicose veins. Formerly treating patients in all fields of general surgery for many years and pioneering laparoscopic surgery (a form of minimally invasive surgery), Dr. Boter developed a special interest in minimally invasive procedures for varicose veins disease, dating back to 1992. In its earlier stages, the focus of varicose vein disease management was Microphlebectomy – the removal of large varicose veins through small skin incisions. This was a popular surgical technique in Europe and once it began in the United States, patient interest and satisfaction were very high. As modern technologies evolved (lasers, ultrasound technology, modern local anesthesia), varicose veins no longer required in-hospital surgeries and these minimally invasive procedures could be comfortably and safely performed in physician offices.

Taking these developments in minimally invasive varicose vein surgery and combining it with a passion for treating varicose vein disease, Dr. Boter founded the Modern Vein and Laser Center in 2005. This Center, located in Bay Ridge, Brooklyn, NY is a state-of-the-art accredited facility which has treated thousands of patients using a variety of minimally invasive procedures and techniques. Dr. Boter remains on the cutting edge of using all modern technology to achieve the best outcome for his patients.

Dr. Merab Boter, MD has a rating of 3 out of 5 stars based on the reviews from 18 patients. FindaTopDoc has aggregated the experiences from real patients to help give you more insights and information on how to choose the best Surgeon in your area. These reviews do not reflect a providers level of clinical care, but are a compilation of quality indicators such as bedside manner, wait time, staff friendliness, ease of appointment, and knowledge of conditions and treatments.
Overall Rating
Promptness
Courteous Staff
Accurate Diagnosis
Bed Side Manner
Would Recommended to Family and Friends

Dr. Boter has been practicing general surgery since 1970. With a passion for his profession, he has developed successful practices in many areas of his field, including gastrointestinal surgery, hernia repair surgery, gallbladder surgery, trauma surgery, and vascular surgery, among others.

When minimally invasive procedures began emerging throughout Europe and the United States,  laparoscopic gallbladder removal was one of the first such procedures that started the “revolution in surgery” in the early 1990’s. Dr. Boter was the first to implement this procedure in his hospitals in 1991. Also, he was one of the first surgeons in the country to perform laparoscopic hernia repair in 1993 and ended up sharing his experience with other surgeons in the region and abroad.

However, at the time, he was looking for something even more innovative, something that would not require a hospital operating room or general anesthesia. As his search continued, new types of local anesthesia were introduced, allowing surgeons to perform varicose vein surgery in their offices. Another major step forward was the development of modern lasers and sophisticated ultrasound technology, allowing surgeons to perform minimally invasive (non-surgical) treatment of varicose veins at the office under local anesthesia. These lasers were approved by the FDA and most insurance companies began to cover such procedures in 2005.

It was that exact year that Dr. Boter founded Modern Vein & Laser Center in Brooklyn, New York City, New York. To this day, he remains dedicated to providing patients with vein care for both large varicose veins and spider veins. Some of the treatments utilized at the Center include endovenous laser therapy, endovenous radiofrequency therapy, microphlebectomy, foam sclerotherapy, liquid sclerotherapy, radiofrequency  therapy, intense pulsed light therapy, and many more. Patients are able to return to home or work ten minutes after the procedure is completed with no or minimal post-procedure discomfort.

Pertaining to the doctor’s educational background, he earned his medical degree from the Bogomolets National Medical University in Kiev, Ukraine. Upon relocating to the United States, he went on to complete his residency in general surgery at Stony Brook University Hospital in Stony Brook, New York.

Before long, he became board-certified in surgery by the American Board of Surgery, which is an independent, non-profit organization located in Philadelphia, Pennsylvania, founded for the purpose of certifying surgeons who have met a defined standard of education, training, and knowledge. He also attained membership status with the American College of Phlebology and the American Society of General Surgeons.

Merab Boter, MD, attended the Bogomolets National Medical University/Natsionalʹnyy Medychnyy Universytet Imeni O.o. Bohomolʹtsya in Kiev, Ukraine, and received his medical degree in 1970. Furthermore, upon relocating to the United States, he conducted his general surgery residency at Stony Brook University Hospital/Stony Brook Medicine in Stony Brook, New York. Dr. Boter received board certification in general surgery from the American Board of Surgery. He remains a member of the American College of Phlebology and the American Society of General Surgeons. For more information about Dr. Merab Boter, please visit https://www.findatopdoc.com/doctor/580793-Merab-Boter-Surgeon.