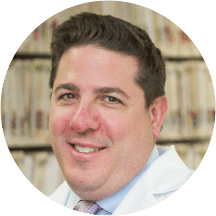 Dr. Oren S. Keiser, MD, FACOG has a rating of 5 out of 5 stars based on the reviews from 59 patients. FindaTopDoc has aggregated the experiences from real patients to help give you more insights and information on how to choose the best OB-GYN (Obstetrician-Gynecologist) in your area. These reviews do not reflect a providers level of clinical care, but are a compilation of quality indicators such as bedside manner, wait time, staff friendliness, ease of appointment, and knowledge of conditions and treatments.
Overall Rating
Promptness
Courteous Staff
Accurate Diagnosis
Bed Side Manner
Would Recommended to Family and Friends

Dr. Keiser is a board-certified obstetrician-gynecologist at West Essex OB/GYN in Livingston, New Jersey. In addition to practicing office gynecology, he has a special interest in hysteroscopic and laparoscopic surgery. He often uses these newer technologies to allow a more minimally invasive approach to surgical gynecology.

A part of Axia Women’s Health, West Essex OB/GYN cares for women from adolescence through their post-menopausal years. The practice is devoted to obstetrics and gynecology, including well-woman care, infertility, contraceptive counseling, surgery, and complete obstetrical management including care of high risk pregnancies.

In order to provide women of all ages the best possible healthcare, Dr. Keiser offers his individual attention to each patient. He is focused on proper well-women care as well as the prevention and treatment of gynecological disorders. He is also committed to fostering long-term physician-patient relationships throughout his patients’ reproductive years and beyond.

Subsequent to receiving his medical degree from Albert Einstein School of Medicine, Dr. Keiser completed his residency at St. Barnabas Medical Center. Before long, he attained board certification in obstetrics and gynecology through the American Board of Obstetrics and Gynecology (ABOG). The mission of the ABOG is to define standards, certify obstetricians and gynecologists, and facilitate continuous learning to advance knowledge, practice, and professionalism in women’s health.

An active participant in the management and care of obstetrical patients, Dr. Keiser is affiliated with St. Barnabas Medical Center, Clara Maass Medical Center, and The Gregori Surgery Center. He is also a Fellow of the American College of Obstetricians and Gynecologists (FACOG).

Together with his wife, Stephanie, and their five children, he resides in Essex County, New Jersey.

Head south on Old Short Hills Road 2780 ft
Make a sharp right 358 ft
Turn left 41 ft
Make a slight right 265 ft
You have arrived at your destination, on the right