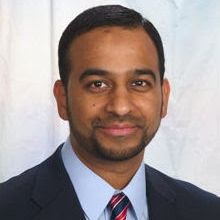 Dr. Suhail Sharif is a surgical oncologist practicing in Fort Worth, TX. Dr. Sharif specializes in diagnosing, staging and treating cancer-related symptoms. Surgical oncologists also decide if the patient is a candidate for surgery or other cancer treatments based on certain factors such as age, physical fitness and other possible coexisting medical conditions.

American Board of Surgery - General Surgery

Dr. Suhail Sharif MD has a rating of 5 out of 5 stars based on the reviews from 1 patient. FindaTopDoc has aggregated the experiences from real patients to help give you more insights and information on how to choose the best Oncologist in your area. These reviews do not reflect a providers level of clinical care, but are a compilation of quality indicators such as bedside manner, wait time, staff friendliness, ease of appointment, and knowledge of conditions and treatments.
Overall Rating
Promptness
Courteous Staff
Accurate Diagnosis
Bed Side Manner
Would Recommended to Family and Friends

Get to know Surgical Oncologist Dr. Suhail Sharif, who serves patients in Fort Worth, Texas.

As the only fellowship-trained surgical oncologist in Tarrant County, Dr. Sharif specializes in the surgical management of advanced colorectal, hepatobiliary, pancreatic, melanoma/sarcoma, breast, and GI tract malignancies. He is also trained in the da Vinci Surgical System and is an expert in minimally invasive surgical management of cancers.

On the subject of his educational background, Dr. Sharif earned his medical degree from the New York Medical College in Valhalla, New York. He then went on to complete his internship and residency in general surgery at the University of Illinois – Metropolitan Group Hospitals in Chicago, Illinois, followed by his fellowship in surgical oncology at The Ohio State University in Columbus, Ohio.

Thereafter, he became board-certified in general surgery by the American Board of Surgery, an independent, non-profit organization located in Philadelphia, Pennsylvania, founded for the purpose of certifying surgeons who have met a defined standard of education, training, and knowledge.

Well recognized in the community and amongst his peers, Dr. Sharif was named America’s Top Surgeons by the Consumers’ Research Council of America in 2007, 2008, and 2009. He was also chosen as a Super Doctor Rising Star by Texas Monthly Magazine in the years 2014 and 2015 and 2019 as well as featured as a Top Doc in the 360 West Magazine in 2017, among others.

Head west on West Rosedale Street 179 ft
Turn right onto 9th Avenue 981 ft
You have arrived at your destination, on the right