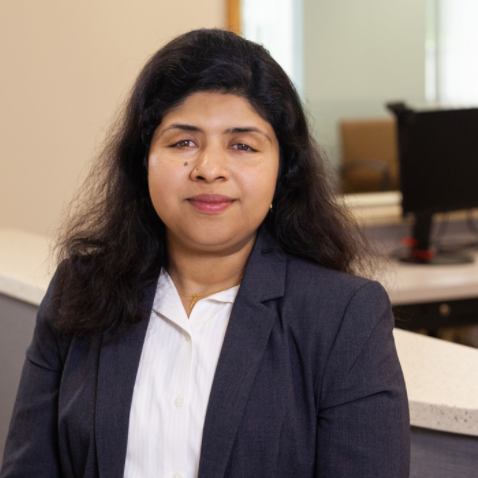 Dr. Mathew, a highly trained radiation oncologist, has been in practice for over two decades. She is the Medical Director of the Dorothy G. Griffin Radiation Oncology Center in Oneida, New York which is part of Roswell Park Network.

She leads a team that includes a Roswell Park medical dosimetrist and medical physicists, along with highly trained and compassionate radiation therapy and nursing personnel. Together, they develop evidence-based and peer-reviewed treatment plans that follow the same quality standards patients can expect from the National Cancer Institute-designated comprehensive cancer center – Roswell Park Comprehensive Cancer Center – in Buffalo, New York.

At the start of oncology career Dr. Mathew did MD in Radiation Oncology from Government Medical College Thiruvananthapuram, India in 2009.

Later on she completed her preliminary year in general surgery at Penn State Hershey Medical Center in 2013. This was followed by an additional residency in radiation oncology at Loyola University Medical Center in Chicago, Illinois in 2017.

Dr. Mathew comes to Central New York after serving as a radiation oncologist at Memorial Hospital in Gulfport, Mississippi. Alongside her clinical role, she serves as an Assistant Professor of Oncology within the Department of Radiation Oncology at Roswell Park Comprehensive Cancer Center.

With an unwavering commitment to her specialty, she is board-certified in radiation oncology by the American Board of Radiology (ABR). The ABR is a non-profit physician-led organization that oversees the certification and ongoing professional development of specialists in diagnostic radiology, radiation oncology, and medical physics.

In order to stay up to date in her field, Dr. Mathew remains an active member of the American College of Radiology Oncology & the American Society for Radiation Oncology.

Radiation oncology  refers to the field of medicine that uses high energy beams  such as x-rays, gamma rays, electron beams, or protons, to destroy or damage cancer cells.