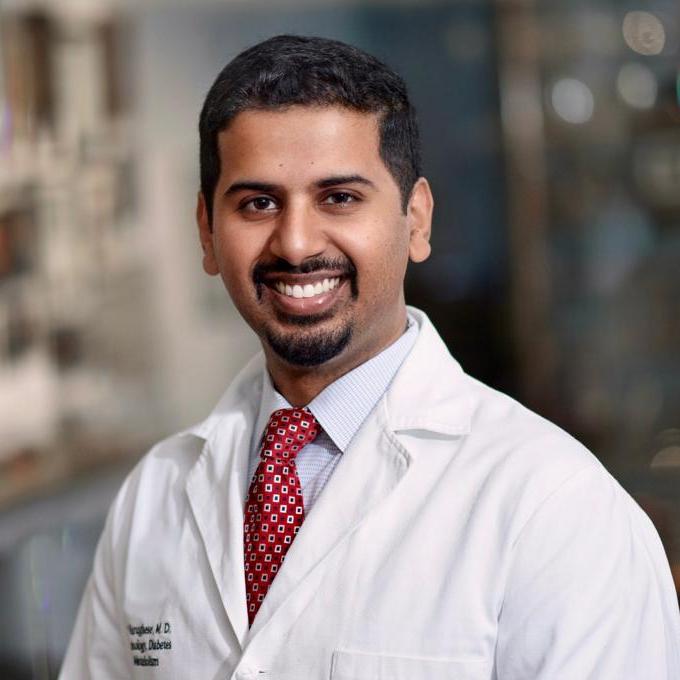 Dr. Libu Varughese practices Endocrinology in Houston, TX. Dr. Varughese specializes in preventing, diagnosing, and treating diseases related to hormone imbalance, and the body's glands in the endocrine system. Endocrinologists are trained and certified to treat a variety of conditions, including menopause, diabetes, infertility, and thyroid disorders, among many others. Dr. Varughese examines patients, determines means of testing, diagnoses, and decides the best treatment methods.

Endocrine & Diabetes Plus Clinic of Houston

Endocrine & Diabetes Plus Clinic of Houston

Get to know Endocrinologist Dr. Libu Varughese, who serves patients in Houston, Texas.

Named to the 2020 Texas Super Doctors Rising Stars and a Top Endocrinologist in Houston by America’s Best Doctors, Dr. Varughese tends to patients at Diabetes Plus Clinic PLLC, where he works alongside Dr. Jongoh Kim.

With offices in the Bellaire area and Memorial City, Diabetes Plus Clinic PLLC offers care for all endocrine disorders, including diabetes, thyroid disease, osteoporosis, adrenal disease, low testosterone, and pituitary disease, among others. Patients of Dr. Varughese respect him for his genuine concern for their health, as well as his easy-going and personable manner.

An active member of the American Association of Clinical Endocrinologists, the doctor is board-certified in internal medicine and endocrinology, diabetes & metabolism by the American Board of Internal Medicine, a physician-led, non-profit, independent evaluation organization driven by doctors who want to achieve higher standards for better care in a rapidly changing world. He is also affiliated with Memorial Hermann Texas Medical Center.

A native Houstonian, Dr. Varughese attended medical school at the age of 16 at Mahatma Gandhi University in India. He then relocated to the United States, completing his residency in internal medicine at St. Joseph’s Hospital and Medical Centre in Phoenix. During his training, he served as Internal Medicine Chief Resident and Co-chair for the American College of Physicians Council of Resident/Fellow Members.

With a strong desire to improve access to healthcare, he was featured in the Catholic Health World newsletter as part of a team of training physicians who were finding various approaches to overcoming obstacles that faced the chronically ill, as well as working in several community outreach clinics during his training.

Thereafter, he completed his fellowship in endocrinology at Baylor College of Medicine in his hometown of Houston, where he trained at St. Luke’s Hospital, MD Anderson Hospital, and Texas Children’s Hospital. Throughout his training, his research focus was in diabetes medication and its effect on inflammation and endothelial dysfunction. However, Dr. Varughese also spent a considerable amount of time managing thyroid disease, cancer, adrenal and pituitary disease, as well as testosterone deficiency.

Endocrinology is a branch of biology and medicine dealing with the endocrine system, its diseases, and its specific secretions known as hormones. Endocrinologists have the training to diagnose and treat hormone imbalances and problems by helping to restore the normal balance of hormones in the body. The common diseases and disorders of the endocrine system that endocrinologists deal with include diabetes mellitus, as well as adrenal, pituitary, and thyroid disorders, among others.

In his spare time, Dr. Varughese loves to do DIY home improvements projects, spend time with family, teach Sunday school at church, and work with the church youth ministry. He is a resident of Missouri City.