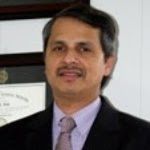 Dr. Arun Naik is a gastroenterologist practicing in Elizabeth, NJ. Dr. Naik specializes in the digestive system and its diseases that affect the gastrointestinal tract, which include organs from the mouth to the anus as well as liver disorders. Gastroenterology includes conditions such as hepatitis, peptic ulcer disease, colitis, nutritional problems and irritable bowel syndrome. Dr. Naik performs colonoscopy and endoscopy procedures and provides accurate and thorough care for patients suffering from digestive issues.

Get to know Gastroenterologist Dr. Arun C. Naik, who serves patients throughout the State of New Jersey.

The doctor’s acclaimed career in medicine began after he earned his medical degree from Topiwala National Medical College in India in 1983. He then relocated to the United States, performing his residency in internal medicine and his fellowship in gastroenterology at Interfaith Medical Center in New York.

Subsequent to his education, Dr. Naik attained board certification in internal medicine and gastroenterology through the American Board of Internal Medicine (ABIM). The ABIM is a physician-led, non-profit, independent evaluation organization driven by doctors who want to achieve higher standards for better care in a rapidly changing world.

On a more personal note, he speaks several languages, including English, Spanish, Hindi, and Marathi.