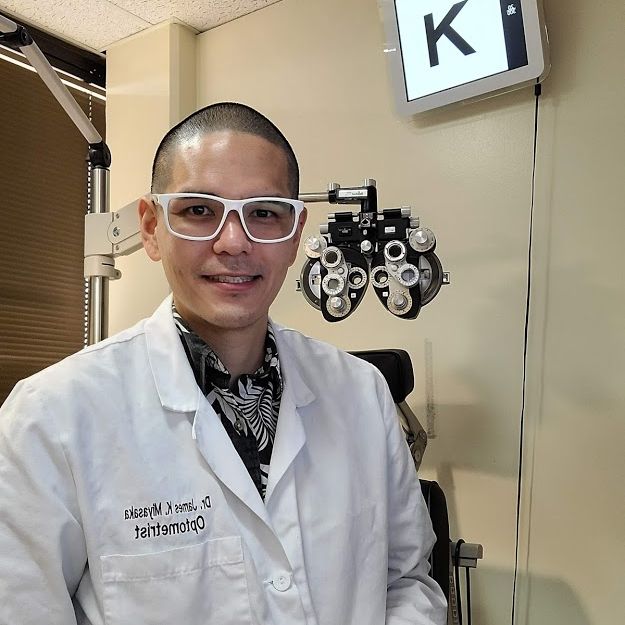 National Board of Examiners in Optometry

Dr. Miyasaka is an experienced optometrist with a therapeutic license to treat ocular diseases and a certification to treat glaucoma. He sees patients at Anne K. Matsushima, O.D., Inc. in Honolulu, Hawaii.

There, he works alongside his brother, Dr. Richard Miyasaka, offering a wide range of optometry services. The practice was founded by their mother (Anne), who retired from practice in 2018.

Born and raised in Hawaii, Dr. Miyasaka is a graduate of Kaimuki High School. He received his Bachelor of Science degree from California Polytechnic State University in Pomona, where he played collegiate basketball and was a NCAA National Finalist. He also attended Western University of Health Sciences College of Optometry, where he received his Doctor of Optometry degree in 2013 and was the inaugural class president.

In addition to working as the Chief Optometrist for the California Department of Corrections and Rehabilitation, Dr. Miyasaka had his own independent optometry office in the City of Industry, California (2013 to January 2016). He then moved back to Hawaii in February 2016 to join his family optometry practice.

Optometry is a health care profession that involves examining the eyes and applicable visual systems for defects or abnormalities, as well as diagnosing and managing eye disease. Optometrists are healthcare professionals who provide primary eye care through comprehensive eye examinations to detect and treat various visual abnormalities and eye diseases such as diabetes, glaucoma, macula degeneration, dry eye, and other autoimmune and systemic diseases. As an optometrists I co-manage with other health care professionals as well as ophthalmologist for surgical eye procedures.

Menehune Basketball was a semi-pro Asian-American basketball club. It was started in California and has spread back to Hawaii, with both Men and Women teams. In Hawaii the program grew to an adult basketball league that spreads all over Oahu.  The players of Menehune Basketball Team compete in various leagues and tournaments nationally, and are affiliated with Menehune Sports Foundation, Prime Time Basketball Association in California, and PTBA Youth.

In his free time, Dr. Miyasaka enjoys exercising, playing basketball, and eating at local Kaimuki restaurants. He also has 3 dogs (WUCO, Nubblet, and Cookie Monster)  that he rescued off the streets of Southern California and now raises them on the beautiful beaches in Hawaii. He named his sports apparel and equipment company after one of his dogs named WUCO. He also enjoys taking out and spending time with his family and hopefully one day can be there basketball coach just like how his Dad was to him growing up. He also sponsors local events and gym supplies for the city and county like new basketball rims, new basketballs for the kids, uniforms,  Easter Egg hunts, Halloween candy hunts and costume contests, and a Christmas toy drive event at Kapiolani Children Hospital. He first learned how to play basketball in the City and County Parks so he does his best to give back to where his love and passion for basketball first began. He also attends C4 Christ Centered Community Church in Kahala