1 What Is an Abdominal Aortic Aneurysm?

Abdominal aortic aneurysm refers to an enlargement or swelling in the abdominal part of the aorta, the large blood vessel that carries blood from the heart to different parts of the body. The aorta is about the thickness of a garden hose and travels from the heart through the center of the abdomen and chest.

Aneurysms may form in different parts of the aorta, but abdominal aortic aneurysms are the most common. It can be a life-threatening situation if the swelling breaks open, resulting in internal bleeding.

How Big Are They?

The aneurysm can range from small (about 1.6 inches) to large (more than 2.2 inches). The swelling may remain the same without any changes, but in some it may grow rapidly and start leaking. Treatment depends on the size and growth of the aneurysm. 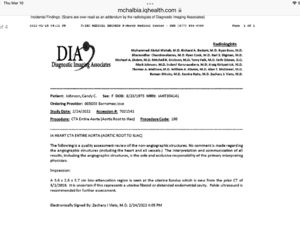 Should I get a second opinion?

Abdominal aneurysms may not show symptoms until they become large, and patients may not be aware of their existence. The abdominal aortic aneurysms often grow very slowly without any symptoms. This makes it difficult to diagnose. In some cases, the abdominal aneurysm will remain as it is without rupturing. It is difficult to predict how fast an abdominal aortic aneurysm grows; aneurysms start slowly and grow gradually, but in some cases, they can start small and remain small.

As the aneurysms grow, they produce symptoms, including:

A ruptured aneurysm is characterized by a sudden onset of pain. It also leads to loss of consciousness or shock, depending on the loss of blood due to internal bleeding.

Other symptoms of a ruptured aneurysm in the abdomen include:

The rupture of an aortic aneurysm is a medical emergency and requires surgery.

Do not delay visiting the doctor if the above symptoms are present.

Males and those who smoke are at an increased chance of developing an abdominal aortic aneurysm. Men aged sixty-five to seventy-five years and who have smoked heavily throughout their lives should be screened for an abdominal aortic aneurysm. However, if you are a male and fall in this age bracket, but have never smoked, the doctor will decide if there is a need for such screening. The doctor’s decision depends on a host of factors, including if there is a family history of aneurysm. For those who have a family history of aneurysm, an ultrasound should be performed at the age of sixty.

The actual causes of abdominal aortic aneurysms are not known.

As a large amount of blood flows through the aorta, weakened walls of the blood vessel bulge outwards, forming aneurysms. A normal aorta is about two cm wide, but with a large aneurysm, it may grow up to 5.5 cm.

Infection and inflammation of the aorta may weaken the wall of the blood vessel, leading to enlargement.

Accumulation of fatty tissues within the blood vessel, called atherosclerosis, is also a possible cause of abdominal aortic aneurysms. Smoking may expedite the enlargement of the aneurysm. High blood pressure also speeds up wall damage.

In most cases, the aortic aneurysm occurs in the aorta, which is in the abdomen. The exact cause, as mentioned above, is still not known, but there are a number of factors that play a role in increasing the risk of aneurysm, including:

Diagnosing abdominal aortic aneurysms is often done during a routine physical examination or when screening for another disease or condition.

Abdominal ultrasounds, CT scans, and MRIs are the confirming tests for these aneurysms.

Are You at Risk?

People who are at an increased risk of developing this condition are recommended to have an abdominal ultrasound as a screening test.

All men above the age of fifty-five with a family history of abdominal aortic aneurysms should have an abdominal ultrasound to rule out the possibility of enlargement in the aorta. Angiograms are also helpful in the detection and treatment of aneurysms in the abdomen.

My grandfather is 87 years old and has suffered a heart...

Which tooth is the hardest to extract?

Treatment of this condition is based on the size and growth of the aneurysm.

Aneurysms in the range of 1.6 to 2.1 inches also may not need surgery. Watchful waiting is often recommended, as the risk of surgery is greater when compared to that of the aneurysm.

Large aneurysms that grow fast need surgical repair of the wall. Large aneurysms are more than 2.2 inches in size and grow more than 0.5 cm within six months. Surgery replaces the weak portion of the aorta with a graft that prevents rupture.

The two common surgical methods are:

The type of surgery depends on a number of factors like age, other complications, and the location of the aneurysm.

Having a healthy heart is the best way to prevent an abdominal aortic aneurysm.

If one has any of the predisposing factors of this condition, regular screening for the presence of aneurysms, particularly after the age of sixty-five, is very helpful in the detection and treatment of aortic aneurysms.

A healthy lifestyle is the best home remedy for controlling and coping with aortic aneurysms. It would include:

There are several common factors that increase the risk and affect complications of abdominal aortic aneurysms. They include:

The most common complication arising from an aortic aneurysm is the rupture of the aortic wall, resulting in internal bleeding, which is a life-threatening condition.

The risk of rupture increases with the size of the aneurysm. Blood clots may also be produced due to enlargement of the blood vessel.

Small blood clots that develop near the area of weakened aortic wall may break off and move through the blood vessel.

These clots result in pain and also hinder the flow of blood to other parts of the body like the legs, kidneys, and other organs.

Below are some of the symptoms which indicate the aortic aneurysm has ruptured:

Abdominal aortic aneurysms can also lead to blood clots. Small blood clots can occur in the affected area of the aortic aneurysm. If the blood clot breaks loose from the inside of the wall of an aneurysm, it can cause blockage in the blood vessel elsewhere in the body. This would then lead to pain or cause a blockage of the flow of blood to other areas, such as abdominal organs, the kidneys, legs, or toes. 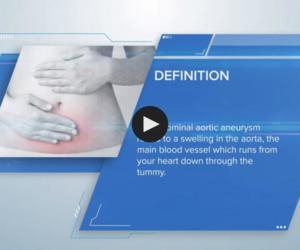 What Is an Abdominal Aortic Aneurysm?

What is the recovery period after a vascular surgery?

What Is an Abdominal Aortic Aneurysm?