1 What is sickle cell anemia?

Sickle cell anemia is an inherited blood disorder characterized by abnormally shaped red blood cells that block the flow of blood. This is a genetic disorder which affects the structure of hemoglobin.

This disease is not contagious like a cold or cough, so it cannot pass from one person to another. This disease is inherited, which means it is passed by genes from parents to their children.

The distorted red blood cells are prone to rupture, resulting in increased destruction. Obstruction of blood vessels by sickle-shaped cells may damage the organ and cause pain.

It is more prevalent among Africans and African-Americans. Two mutated genes inherited from the parents result in this condition.

There is no complete cure for sickle cell. Treatment strategies focus on managing the symptoms.

There are minute cells in tissues which need a constant and steady supply of oxygen to function well. The hemoglobin in red blood cells takes up the oxygen in the lungs which are carried to all the tissues and cells of the body.

These red blood cells which contain the normal hemoglobin are disc shaped. This shape allows the cells to be more flexible so that they can easily move and pass through the large and small blood vessels to provide oxygen.

Sickle hemoglobin is not like normal hemoglobin. They can form stiff rods within these red cells. These sickle shaped cells are not flexible like normal red cells, and can stick to blood vessel walls. This causes blockage, leading to slowing down or stopping the flow of blood. This in turn affects the supply of oxygen to nearby tissues.

This lack of oxygen in the tissue can cause severe panic attacks and pain. These attacks and pain occur without any warning sign. To get these treated the person would need to go to the hospital.

These sickle shaped red blood cells undergo premature death since they cannot function properly due to their shape. This leads to anemia. Sickle cells damage the spleen which is an important organ for fighting infections in the body.

All symptoms of sickle cell anemia are caused by the abnormally shaped red blood cells that block the flow of blood in blood vessels.

Those people affected with sickle cell anemia start to show signs of the disease during the first year of life. This is usually around five months of age. The symptoms and complications of sickle cell anemia vary for each individual and also can range from mild to severe.

Impaired circulation affects the delivery of oxygen to tissues. Symptoms and severity vary with the organ and the extent of involvement.

The main symptoms of sickle cell anemia are:

The patient suffers intense pain because the joints do not get enough oxygen. The surface of the hip bones becomes irregular and there is roughage due to reduced supply of blood. In such cases, patients may require joint replacement surgery other than oral medications.

Some other symptoms include skin and nail beds turning pale, a yellowish tint to the whites of the eyes or skin, sudden paralysis or numbness in arms, legs, and face, fever, dizziness, coldness in hands and feet, and headaches.

The reason that infants do not show such symptoms during birth is because fetal hemoglobin protects their red blood cells from sickling. However, when the baby turns four to five months old, these fetal hemoglobin get replaced by sickle hemoglobin and the cells begin to sickle.

Sickle cell anemia is caused by a gene mutation that results in the production of abnormal hemoglobin. This causes the red blood cells that carry hemoglobin to be distorted, rigid, and sticky.

Sickle cell anemia is passed from parents to offspring as an autosomal recessive inheritance. In this type of inheritance, a child who gets a mutated gene from each of the parent develops the disease.

If the child receives only one faulty gene, the condition is referred to as a sickle cell trait. It is asymptomatic, as these children can make both distorted and healthy hemoglobin. Patients with sickle cell trait are considered carriers and can pass on the mutated gene to the next generation.

The major risk factor for developing sickle cell anemia is the presence of the mutated gene in both parents. Sickle cell anemia is more common in Africa, India, Mediterranean countries, Saudi Arabia, South and Central America, and the Caribbean islands.

It is this hemoglobin S that causes distorted red blood cells. Additional tests are recommended to identify the amount of sickle cells.

People with the sickle cell trait will have low amounts of sickle cells when compared to anemia caused by two gene mutations.

Both of these procedures use samples of fetal cells for analysis.

Blood tests can be conducted on newborns as well as adults or older children. There are two types of sickle cell anemia that are genetically transmitted. In some cases, where both the parents are carriers of hemoglobin S, the child has a risk of developing sickle cell anemia or even thalassemia.

It is important that the child is diagnosed early with the disease. Couples are urged to undergo prenatal testing if it is found that the parents are at risk of passing sickle cell anemia to their child.

Can sickle cell disease be cured?

What are the chances that my child will have sickle...

One can live a normal life if sickle cell anemia is detected early. Late diagnosis can make treatment more painful and debilitating.

These new stem cells produce normal hemoglobin and red blood cells, alleviating symptoms of anemia. After the stem cell transplant, medications are given to prevent the rejection of the stem cells from the donor.

Antibiotics, vitamins, blood transfusions, painkillers, and other medications are used to control complications, if any.

Complications from stem cell transplants and hydroxyurea are rare, but can be serious or life-threatening. Therefore, the families of people suffering with this disease should check with the doctor about the risks and benefits of each treatment.

As sickle cell anemia is an inherited disease, genetic counseling is the only way to prevent having a child with the mutations.

Genetic counseling helps to understand the risk of having a child with this condition.

Remember that there is no cure for sickle cell anemia, and all treatments, including homeopathic remedies, are aimed to alleviate symptoms.

Fish oil is also suggested to reduce the frequency of pain crises.

Speak with your doctor before you begin any home remedies for sickle cell anemia.

Lifestyle modifications are necessary for your child in order to cope with sickle cell anemia.

Children with sickle cell anemia have special needs at school.

Teachers and friends can support the child to make up for the absences due to the disease.

Having a good support system at school and home is essential to cope.

Ensure that they have plenty of fluids and adequate rest. Folic acid supplements and a healthy diet help to avoid complications. Drink at least 8 to 10 glasses of water every day and eat healthy food. Try not to get too hot or cold.

Learn more about how to control pain during pain crises.

You'll likely be referred to a hematologist, who can provide specialized individualized care.

Ensure regular health checkups to prevent any untoward incident. Babies from birth to one year should see a doctor every two to three months.

Illnesses such as flu caused due to infection should be avoided at all costs, since it can be very dangerous for a child with sickle cell anemia disease. 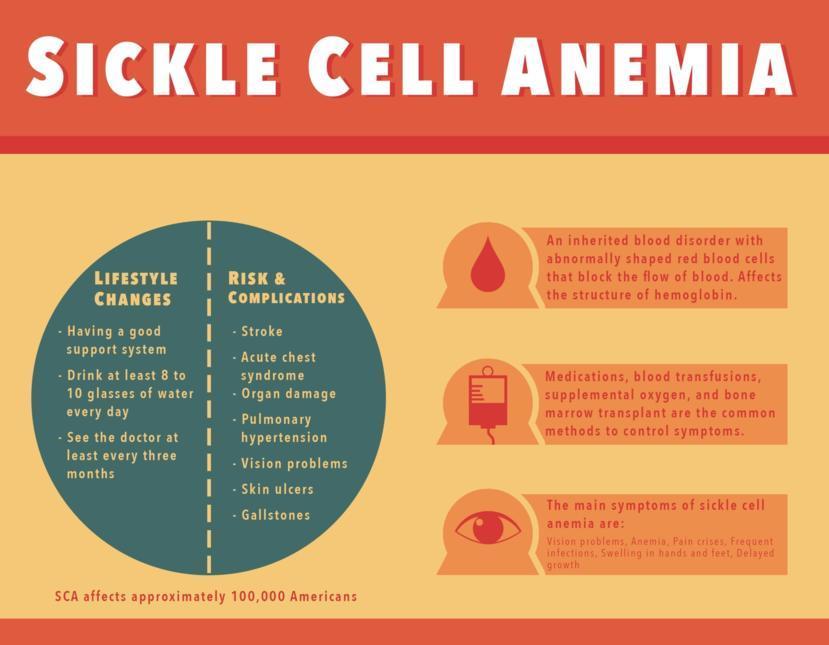 Sickle cell anemia may lead to a number of complications such as: 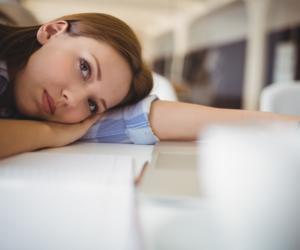 Is there a cure for sickle cell disease?

Can sickle cell disease be cured?

What is the course of treatment for sickle cell anemia in a 8 year old child?

What are the ways to treat sickle cell disease?

What Is Sickle Cell Anemia?

How can I tell if my kids are at risk for sickle cell anemia?

Is there a cure for sickle cell disease?

My first daughter has sickle cell disease. Can my second one have it too?