Tetanus is a fatal infection which is caused by a type of bacteria (Clostridium tetani) that affects nervous system, leading to painful muscle contractions, particularly of the jaw and neck muscles. Around a million cases of tetanus occur worldwide each year. The infection is rare in the developed countries but occurs more often in the less developed countries. Tetanus can interfere with  a person’s ability to breathe  and can ultimately cause death. It is commonly known as "lockjaw".

The tetanus bacteria often enter the body through a puncture wound which can be caused by nails, splinters, insect bites, burns, injection-drug sites, or any skin break. The disease is incurable but can be easily prevented by giving vaccination. Fatality is highest in individuals who have not been immunized and in older adults with inadequate immunization. Thus, it is highly recommended that all children and adults should be immunized against tetanus.

How long does my husband need to recover after his...

Have a question aboutTetanus?Ask a doctor now

Signs and symptoms of tetanus may appear anytime from a few days to several weeks after tetanus bacteria enter your body through a wound. The incubation period (the time between exposure to the bacteria and the illness) is between 3 to 21 days, but symptoms typically appear within 14 days of initial infection. Infections that occur faster after exposure are typically more severe and have a worse outcome (prognosis). 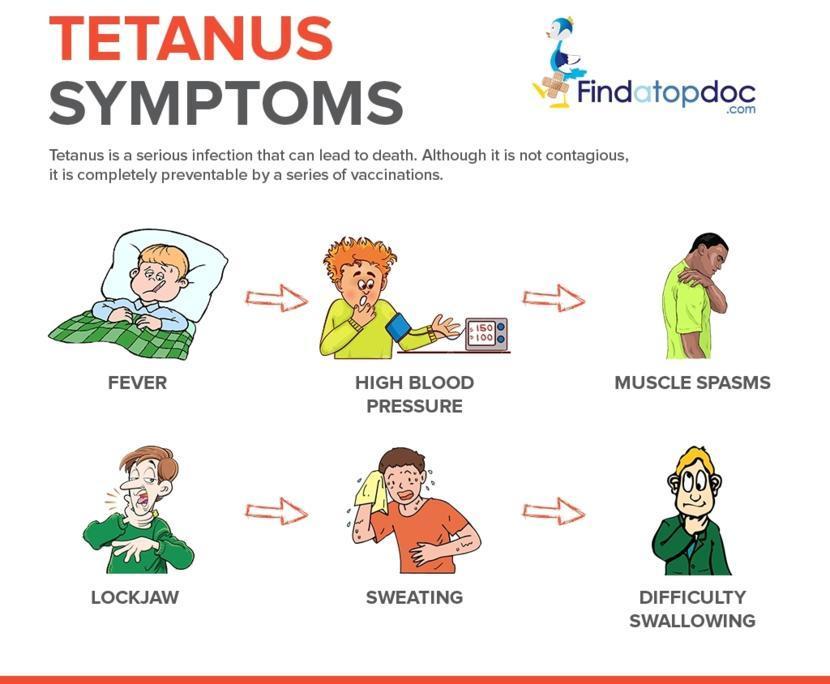 Common signs and symptoms of tetanus, in order of appearance, are:

1. Spasms and stiffness in the jaw muscles.

2. Stiffness of the neck muscles

5. Painful body spasms lasting for several minutes which are typically triggered by minor occurrences, such as a draft, loud noise, physical touch or light.

Tetanus is caused when the Clostridium tetani bacteria, enters the body through any deep wound or skin injury, spread throughout the body and produce a toxin called tetanospasmin. This toxin is a poison that blocks the nerve signals from your spinal cord to your muscles. This can lead to severe muscle spasms. These bacteria are mostly found in soil, dust and animal feces. This infection has been associated with:

If your wound is small and clean but you're concerned about infection or whether you're immune from tetanus, start by seeing your family doctor to receive a diagnosis. If your wound is severe or you're experiencing symptoms of tetanus infection (or your infant is), seek emergency care and if possible, let your doctor know the following information:

For tetanus, some basic questions to ask your doctor include:

If a wound is obvious, your doctor will inspect it by a physical examination. He or she will inquire you about your symptoms, severity of the symptoms, your immunization status, and how you have received the wound. Laboratory tests generally are not helpful for diagnosing tetanus. 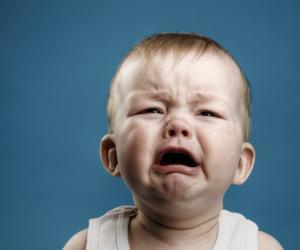 Gastroenteritis in Children: Signs of Dehydration

Since tetanus is incurable the main focus of the treatment is on managing symptoms and preventing complications. The choice of treatment will depend on the severity of your symptoms. Tetanus is typically treated with a variety of therapies and medications, such as:

Vaccination can prevent tetanus infections, but only if you receive your booster shots on schedule. Immunization can also help preventing the effects of the toxin.

The primary vaccine series of tetanus vaccine usually is given to children as a part of the diphtheria and tetanus toxoids and acellular pertussis (DTaP) vaccine.

For tetanus, children today are normally vaccinated at 2, 4, and 6 months, then again at 18 months and once more around age 4 to 6. If you were never vaccinated against tetanus as a child, see your doctor about getting the Tdap vaccine.

7 What is the tetanus shot?

The tetanus vaccine or tetanus shot is a vaccine that provides protection from tetanus. It is one of the vaccines that the Centers for Disease Control and Prevention (CDC) recommends for all babies, kids, teenagers, and adults.

It is injected into the muscle by certified doctors or healthcare professionals only.

The tetanus vaccine is available in combination with vaccines for other medical conditions including diphtheria and pertussis.

The available tetanus vaccines are:

The tetanus shot is also called tetanus toxoid which contains heat-treated or chemically inactivated bacterial toxin. The inactivated toxin (toxoid) is unable to cause the disease. However, it can generate an immune response.

How does the tetanus vaccine work?

After you receive an exogenously administered toxoid, your immune cells start producing antibodies against it. Therefore, when you are exposed to the same toxin in the future, the available antibodies act against it.

What is the difference between the anti-tetanus serum (ATS) and tetanus toxoid (TT)?

Anti-tetanus serum and tetanus toxoid are not the same. They have different conditions for use.

ATS, also called Tetanus Anti-toxin (TAT), is reserved for use in severe cases where the wound is very large and dirty. It is prepared from the blood of the horse that is repeatedly administered high amounts of the tetanus toxin to induce high levels of circulating antibodies.

ATS is injected into the muscle or skin within the first six hours after the injury. It should not be given during pregnancy.

On the other hand, Tetanus toxoid provides an active immunity against the tetanus toxin and may be used for routine injuries. It is safe for use during pregnancy and is injected into the muscle within the first 24 hours after the injury.

ATS contains the serum that is rich in antibodies against the tetanus toxin, whereas TT is a non-virulent fraction of the toxin that is administered to the patient to elicit an immune response.

The severity of tetanus shot side effects can range from fever and swelling at the injection site to serious neurological illnesses.

The minor side effects that occur at or around the injection site include:

In addition, some individuals may also have one or more of the following side effects:

In very rare instances, individuals receiving the tetanus shot can have Guillain-Barre syndrome (GBS). Researchers are not sure if there is a link between GBS and the tetanus vaccine. Even if any link could be established, they believe such link will not have significant impact on public health. Therefore, the potential risk for GBS should not stop you from getting vaccinated.

Most of the tetanus shot side effects are self-limiting and tend to go away without any treatment. You may take OTC painkiller to mitigate headache, and joint and muscle pain. Acetaminophen can provide relief from fever.

If any of the side effects persist, worsen, or new symptoms develop after vaccination, talk to your doctor right away. Some serious side effects that need immediate medical attention include seizures, difficulty swallowing, and tingling sensations in the limbs.

The tetanus shot may cause skin reactions like redness and itching. These are minor problems and you can manage them by conventional measures.

Allergic reactions due to the tetanus shot are very rare. Nevertheless, allergies are very serious in nature and you should seek emergency medical help if you develop any of the following symptoms:

9 When do you need a tetanus shot?

DTaP vaccine protects your child from 3 different diseases (including tetanus) with a single shot: diphtheria, tetanus, and pertussis.

You should vaccinate your child with 5 doses of DTaP vaccine, one dose at each of the following ages:

Injuries that cause a puncture in the skin can harbor the bacteria that causes tetanus. Open injuries can provide a medium for entry of the tetanus bacteria into the body.

When you sustain any injury that is likely to expose you to the bacteria, you should take the emergency tetanus booster dose after consulting with your doctor. Some examples of such injuries include deep dirty wounds, animal bites, lacerations, and needle or burn injuries.

In a normal condition, you should get the tetanus booster every 10 years even in the absence of any injury.

The need for the booster dose arises because the first exposure to the bacteria does not provide natural immunity against tetanus.

There have been numerous headlines regarding the potential health risks due to vaccination during pregnancy. However, the tetanus toxoid is considered safe for use during pregnancy. According to the revised vaccination guidelines in 2013, pregnant women can be given diphtheria, tetanus, and pertussis (DTaP) vaccine at any time of pregnancy. (Note that the preferred time to administer the shot is after the second trimester).

The tetanus shot is safe for use if you are nursing a baby. However, you should consult your doctor immediately if you have any concerns.

10 How long is a tetanus shot good for?

A tetanus shot is good for a maximum of 10 years. However, if you sustain a very deep or dirty injury and have not had a tetanus booster for the last 5 years, you should get one immediately.

It’s not clear if its effect lasts for more than a decade after the last dose.

Therefore, if you get a deep injury with potential exposure to the virus and you are not sure when you had the last booster dose, you should get a new booster dose.

11 Things to remember when getting a tetanus shot

Drugs that weaken your immune system may cause drug interactions with the tetanus booster. Therefore, you need to inform your doctor if you are taking drugs such as corticosteroids and anti-tumor agents.

Talk to your doctor if you:

It can also alter blood-clotting mechanisms in some individuals. Therefore, patients who have abnormal clotting cell counts should exercise extra caution.

Tetanus is fatal, so you must adapt your lifestyle appropriately if you think you are suffering from it.

Untreated wounds or other deep cuts, and animal bites, particularly dirty wounds may put you at increased risk of tetanus infection. Get medication if the wound is deep and dirty, especially if you are not sure of your immune status. Always keep your wound covered with a bandage to avoid trapping of bacteria in your wound. Your doctor may need to clean the wound, prescribe an antibiotic and give you a booster shot of the tetanus toxoid vaccine.

If you've previously been immunized, your body should quickly make the needed antibodies, to protect you against tetanus.

If you have a minor wound, these steps will help prevent you from getting tetanus:

There are several risks and complications associated with tetanus.

Without treatment tetanus can be fatal so, you must see the doctor as soon as possible. Certain factors are necessary for tetanus bacteria to proliferate in your body and thus, they increase your likelihood of getting tetanus. These factors may include:

Tetanus cases have developed from the following:

Tetanus results in some severe complications as described below:

Treatments for tetanus include injection of tetanus immunoglobulin, antibiotics such as Penicillin, metronidazole or tetracycline. Other supportive treatments include administration of muscle relaxants like diazepam or baclofen.

Your doctor may recommend surgery if you have sustained large injuries with extensive tissue damage. The surgery removes dead tissues and foreign particles from the site of the injury. This type of surgery is called debridement.

More from FindATopDoc on Tetanus

Do I need a tetanus shot if I slipped and fell on the...

My daughter got scratched by my dog. Will she need... 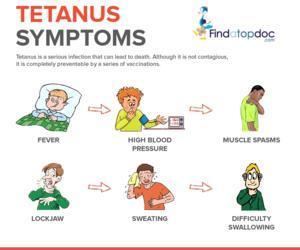 Why do I have pain after tetanus injection?

Do I need a tetanus shot after hurting myself on a piece of metal?

Do I need a tetanus shot if I slipped and fell on the road?

My daughter got scratched by my dog. Will she need a tetanus shot?

For which wounds is a tetanus shot required?