An X-ray is a type of electromagnetic radiation, which can be used to take digital images of parts of the human body. It is the same with visible light but has a certain different characteristic. The beneficial use of an X-ray is for medical imaging. It can help the physician to look inside your body without the need of an incision. X-rays are also used in cancer treatments and exploration of cosmic sources.

X-rays are made when electrons strike a target that is made of metal. The electrons are then liberated from the heated filament and are accelerated through a high voltage to the metal target. Energy is then converted to X-rays when electrons strike the target. In addition, X-rays are produced by a synchrotron. A synchrotron is a type of particle accelerator that causes charged particles to move inside a closed, circular path. When the high-speed electrons are forced to move in a circular path through a magnetic field, photons are emitted due to the angular acceleration. When the energy is more than enough, the electrons will then produce X-rays. 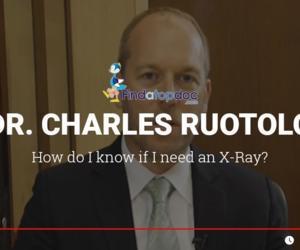 Have a question aboutX-Ray?Ask a doctor now

One characteristic of X-rays is that they carry much more energy as well as deposit a part of this energy inside the body as the rays pass through. The absorbed energy has the probability to create certain biological effects to the tissue. Radiation dose is the amount of X-ray energy absorbed in the tissue.

Some risks may be involved when a person gets an X-ray. However, for most people, the advantages outweigh the risks.

An X-ray has various uses because of its ability to penetrate to certain materials.

X-rays were originally used for bone imaging. Bones were easily noticeable from the soft tissues on the film and was available during those times. X-rays are recognized as an essential tool for a wide variety of assessments and procedures. X-rays are regarded as a painless and non-invasive method for diagnosing a disease, supporting medical as well as surgical treatments, and monitoring therapy. They can also be used as a guide for medical personnel when they insert stents, catheters, and other devices in the body. X-rays are also used to check a person's lungs for pneumonia and breasts to look for breast cancer (mammogram).

X-rays can also be used for testing and evaluation applications, especially when identifying cracks or flaws in structural components. They are also important when it comes to transportation security inspections of luggage, freight, and passengers.

X-rays can be classified into two types. First are the soft X-rays, which fall in the range of the EM spectrum between the gamma rays and UV light. This type of X-ray has a high frequency. The second type of X-ray is called a hard X-ray. Hard X-rays are made by accelerating electrons and are in the same region of the gamma rays in the EM spectrum.

The X-ray was discovered by Dutch/German scientist Wilhelm Conrad Röentgen in 1895. Röentgen observed crystals near a high-voltage cathode-ray tube, which exhibited a fluorescent glow even when Röentgen shielded the crystals with a dark paper. The tube produced some form of energy that was penetrating the paper, causing the crystals to glow. Röentgen then called this unknown energy as X-radiation. With his discovery, Röentgen was awarded in 1901 the very first Nobel Prize in Physics.

Studies have shown that radiation can penetrate soft tissues and not the bone and would also create shadow images on photographic plates. X-rays were already used during World War I for medical purposes.

How does an X-ray work?

Through electromagnetic waves, X-rays produce inside images of the body. The produced pictures are in shades of black and white, which represent the parts of the body. These two colors are caused by the different absorption rate of radiation in the tissues. For example, calcium in bones is more likely to absorb rays the most. That is why our bones look white on X-ray films. On the other hand, soft tissues like muscles and fat absorb less rays. Thus, they look gray. The color black on X-rays represents the air, which absorbs the least rays. Moreover, the rays to be absorbed depend on the material’s density. To have a more detailed image, some X-ray tests introduce a contrast medium into the body. These could be barium or iodine, which can highlight parts of the body for a clearer image.

An X-ray machine creates a controlled beam of radiation that is used to produce a picture of the internal parts of the body. The beam is then directed to the part being examined. After the rays pass through the body, the beam falls on a special plate or a piece of film where it emits a sort of shadow, showing the colors black and white on X-ray films. Oftentimes, several images are taken from various angles for a more comprehensive view of the targeted region. The images that were obtained during the exam can be viewed on a film. They can also be viewed on a computer screen through digitization.

What are the benefits of X-ray Tests?

The following are various benefits an X-ray procedure can provide:

An X-ray is a very effective method of looking at the bones. It can also be used to detect a variety of medical conditions such as bone fractures, scoliosis, lung problems (lung cancer and pneumonia), tooth problems (dental abscesses and loose teeth), swallowing problems (dysphagia), heart problems (heart failure), and both non-cancerous and cancerous tumors of the bone. A lot of areas in the body can be examined through an X-ray. Although it is mainly used to view bones and joints, soft tissues can also be examined. X-rays are also used to guide doctors or surgeons while performing certain medical procedures.

High energy-radiation can kill cancer cells by destroying their DNA. However, one disadvantage of this type of treatment is that it can damage both healthy and cancer cells. To minimize the treatment’s side effects, the National Cancer Institute highly recommends that radiation therapies must be cautiously planned beforehand.

Other Types of Imaging Tests

Fluoroscopy is a type of imaging that utilizes a fluoroscope, which is an X-ray machine used to see real-time movements inside the body. This imaging technique is also used to observe specific diagnostic and treatment procedures, which are being conducted in the body.

CT scans have been in use since the mid-70s, which have revolutionized medical imaging. Nowadays, it provides detailed imaging information with fast results and has become one of the vital tests performed to come up with correct and accurate treatment decisions. Similar with X-rays, a CT scan also produces a beam of rays. However, it provides more detailed images compared to a conventional X-ray, particularly when it comes to blood vessels and soft tissues such as muscles and internal organs. When the scanner rotates, several sectional views of the area being examined are generated. Views from different angles and a 3D visualization can be created through a CT scan.

The scans produced by CT scanners are completed within seconds or fractions of a second. In some cases, a contrast agent is used or injected prior the procedure as it helps to further assess the vessels or organs. A CT scan can produce images of any parts of the body including the lungs, heart, and abdomen. It is also very useful is examining skeletal injuries because even small bones can be clearly shown in a CT scan. Because CT scans can quickly provide data, it is very important during medical emergencies.

Mammography is a form of X-ray imaging that uses a low-dose system of X-ray. It is specially designed to produce detailed images of the breast, a procedure commonly known as a mammogram. Mammography is used as a screening tool that can help detect the early stage of breast cancer in women who do not have the signs or symptoms of the disease. It can also be used in diagnosing certain breast diseases in women who experience symptoms such as breast pain, lumps, and nipple discharges.

Another development in mammography is the DBT or digital breast tomosynthesis, which provides 3D images of the entire breast. This procedure obtains and combines breast images from several angles producing a 3D image.

Ultrasound imaging, also known as sonography, is a medical procedure that uses high-frequency sound waves to create dynamic visual images of tissues, blood flow, or organs in the body. The sound waves are passed on to the part to be assessed and the returning echoes are then captured to provide the doctor of a live image of the part of the body. Healthcare professionals can study the part of the body in real-time, making ultrasound imaging a vital diagnostic procedure.

MRI uses a high magnetic field with the addition of radio frequency pulses to create detailed images of the internal structures of the body in cross-sectional images. An MRI can provide high-quality images with outstanding contrast details of anatomic structures and soft tissues without the risk of exposing the patient or healthcare practitioner to ionizing radiation. An MRI scan can obtain direct views of the body in approximately any orientation.

It is a special form of nuclear medicine scan that detects radiation from the emission of positrons. PET scans normally use a low-dose of radiation as the positrons are very short-lived.

What is an arthrogram?

Can an X-ray detect cancer?

More from FindATopDoc on X-Ray

Is a chest x-ray safe for pregnant women?

What is the difference between an X-ray and a CT scan?

Is a chest x-ray safe?

Does a dislocated shoulder show on an X-ray?

How long do X-ray results take?