Endocrinology-Diabetes Questions Diabetes
My husband is 27 years old and has just been diagnosed with type 2 diabetes. Do you think with exercise and lifestyle changes it can be reversed?

Mr. Paul C. Norwood Endocrinology-Diabetes Fresno, CA
Well there is little information here. Is he overweight? How high are the glucose levels? However let me make someone up. Let's say he is 5 foot and 10 inches (5'10") and 240 pounds. Let's say his glucose levels fasting are about 160 mg/dl . Thus he is really overweight and he is still making insulin since his glucose is still in the 100's. If he changes his lifestyle, loses weight (let's say 50 pounds) and gains muscle mass by exercising, then yes he could control his diabetes with probably 1 medication, metformin. Metformin helps the body use less insulin thus protecting overuse of the insulin supply. I am so sorry to tell you that I only see someone do this rarely. Let us say there is nothing new about having a healthy lifestyle. With life so precious it is a little be of a mystery of why so few have one. 75 percent of Americans are overweight, 9% are massively obese and 42% are obese with a BMI (body mass index) of over 30. Best Dr. Norwood Board Certified Endocrinologist
Dr. Lyudmila Shvets Endocrinology-Diabetes Armonk, NY
The answer is possibly, depending on how severe his diabetes is and how much lifestyle modifications he makes. The other fact to consider is if he has some genetic type of diabetes which may certainly improve with lifestyle modifications such as healthy eating and routine exercise, but some of these types are more difficult to fully reverse.

What is the ideal time gap to maintain between taking...

Remission of diabetes is defined as normal fasting sugar below 100 and two hour post-prandial sugar of l40 or less of all medications. I have had several patients achieve this goal through vigorous weight loss of 5 to 7% as well as exercise. The key is weight loss as this reduces insulin resistance which is one of causes of type 2 diabetes, the other being pancreatic beta cell decrease in insulin secretion. The key is weight loss. Speak to your physician about seeing a nutritionist.

I would just like to mention, The Diabetes Prevention Program Study which studied prediabetic patients found that those who reduced weight by the above amounts had a much lower rate of developing diabetes; about 58%. Ten years later, those patients who continued their diet and exercise showed a continued reduction in progression to diabetes.

Dr. Richard A. Guthrie Endocrinology-Diabetes Mount Hope, 20
The answer to this is yes and no. No, because diabetes is a genetic disease and we can't change our genetics. Though you can't change the genetic predisposition for diabetes, there are environmental factors in diabetes that can be changed so that the symptoms go away and medicine may not be needed to control the blood sugar. Lifestyle change is needed and should be a part of diabetes management anyway. This means diet, exercise, and wt. loss if overweight. This will help whether it is enough is the question. Do it and see the benefits whether he comes off medication or not.

Do you have sweet smelling urine if you have diabetes? 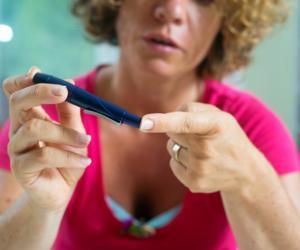