Heartburn is usually triggered when stomach acid travels up toward the esophagus and cause a burning feeling in your throat or chest. It can be a very unpleasant feeling, but there are natural home remedies that can help relieve it aside from taking over-the-counter medications.

However, it's time to see your doctor if you continue to experience heartburn more than a week or if the antacids you're taking do not work after two weeks. You may have a digestive disorder called gastroesophageal reflux disease (GERD).

Have a question aboutHeartburn?Ask a doctor now

Chronic heartburn can lead to problems such as strictures and inflammation in the esophagus. However, future complications can be prevented by stopping acid reflux. In rare cases, having chronic heartburn may even be one of the symptoms of cancer.

There are over-the-counter heartburn medications that can help relieve the discomfort, and they include antacids, proton pump inhibitors (PPIs), and histamine-2-receptor antagonists (H2RAs). However, there are also useful home remedies that you can try before taking medications for heartburn.

Let's take a look at some of the natural remedies you can do at home to relieve heartburn.

Give your stomach the time to empty before going to sleep by not eating 2-3 hours before your bedtime. According to one study, significant acid reflux symptoms are experienced when GERD patients consume their dinner close to their bedtime (1).

2. Sleep with your head elevated.

There are individuals who find it difficult to fall asleep at night due to reflux symptoms. In one study, patients in a bed-up position had shown lesser episodes of acid reflux than those who did not have any elevation during sleep (2).

Another study concluded that bed elevation may help reduce the symptoms of acid reflux at night and is one of the effective lifestyle measures for people with GERD (3).

Most symptoms of acid reflux often occur after consuming meals. The symptoms also tend to get worse after eating large meals. For this reason, reflux symptoms may be prevented by avoiding the consumption of large meals.

People who are overweight or obese tend to be more at risk of experiencing symptoms of acid reflux and heartburn (4). The reason is that having extra belly fat can put excessive pressure in the abdomen and push the lower esophageal sphincter upward and away from the diaphragm, which is the muscle that prevents stomach acid from leaking back up to the esophagus. This condition is called hiatus hernia.

Aside from being overweight, pregnant women also have an increased risk of having heartburn and reflux symptoms due to hiatus hernia (5).

5. Consume a diet low in carbohydrates.

According to studies, consuming a low-carb diet may help relieve the symptoms of acid reflux. Experts also suggest that the presence of undigested carbohydrates can cause an overgrowth of bacteria and an increase in abdominal pressure, which may be the leading causes of acid reflux.

Studies also indicate that having an impaired digestion and absorption of carbohydrates can cause an overgrowth of bacteria. Gas and bloating can also be experienced when there are plenty of undigested carbohydrates in the digestive system. It can also make people belch more frequently than others (6,7,8).

Having a low-carb diet can help improve the symptoms of acid reflux (9, 10).

6. Avoid drinking too much coffee.

If you think that drinking coffee makes your heartburn worse, limit your intake or just simply avoid it.

Acid reflux symptoms tend to get worse when excessive alcohol is consumed. To help relieve the symptoms, try to limit your alcohol consumption.

Excessive intake of alcohol can impair the normal function of the lower esophageal sphincter, increase stomach acid levels, and make the esophagus unable to clear itself of the acid (15, 16). Moderate intake of alcohol may even cause symptoms of acid reflux in healthy people (17).

One of the most common complaints of patients with acid reflux is the worsening of their symptoms after drinking citrus juice. According to research, the esophageal lining can get irritated due to the ingestion of citrus drinks.

In one study, 72 percent of 400 GERD patients reported worsening reflux symptoms after drinking citrus drinks and juices (18). However, citrus drinks do not specifically cause weakness of the lower esophageal sphincter but irritate the esophageal lining instead (19).

Even though citrus drinks do not cause acid reflux, they can temporarily make the symptoms of acid reflux worse.

According to one study, drinking diluted raw and unfiltered apple cider vinegar after meals may help relieve heartburn. However, more research studies are still needed to prove the effectiveness of apple cider vinegar in relieving symptoms of acid reflux (20).

Chewing gum can stimulate swallowing and trigger the production of saliva, which might help dilute the acid from the esophagus.

The World Journal of Gastrointestinal Pharmacology and Therapeutics published an article, which suggested that the symptoms of acid reflux may be reduced when gum is chewed after meals (21).

A teaspoon of baking soda mixed to a glass of water can naturally help relieve heartburn. When this mixture is consumed, it can help neutralize stomach acid and can provide an immediate relief from occasional heartburn.

However, if you regularly experience heartburn, avoid using this remedy. It could cause unwanted side effects, such as nausea and swelling as it is high in salt.

Heartburn is a common and minor discomfort that can go away over time. However, if home remedies fail to work and if you have other symptoms, you need to call your doctor or head straight for the emergency room, especially if you have any of the following symptoms:

How does Pregnancy affect Acid Reflux?

What should I do about my frequent heartburn?

More from FindATopDoc on Heartburn 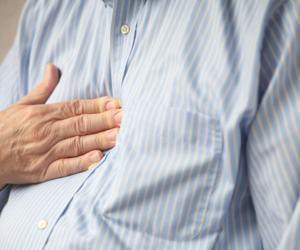 What are some safe natural ways to treat acid reflux?

Are there any herbs that can treat anxiety?