Allergy season would mainly depend on the underlying factor of what individuals are allergic to and where they live. If an individual is suffering from a seasonal allergy or hay fever, then tree pollens could trigger the allergic reaction in the season of spring or late winter. If you are allergic to ragweed pollen, then ragweed tends to release its pollen in the season of fall or summer. The allergic reactions also depend on where the individual is located. In the southern states, allergy season can start from the early month of January until November.

If an individual has allergy throughout the year or if the allergy tends to worsen when one is indoors, then the possible cause would be that the individual is allergic to dust or pet dander. It is important to check with your doctor so he can identify the cause of the allergic reactions. Once the cause is identified, you will then know when the season of allergy would start and accordingly take precautions.

Why do certain allergy medicines work for certain people?

Various types of allergens are around us, which make us cough, sneeze, make our eyes water, and cause us a lot of discomforts. In the United States alone, around 20 percent of the population has shown signs of allergies. Let's have a look at some of the seasons during which the individual would suffer from a lot of allergies.

During the winter season, one can find a less amount of pollen floating in the air. However, due to the heat indoors, it can result in the rise of house dust, which is a trigger of winter allergy. For those individuals who are allergic to dust mites, winter season allergies would be as bad as the spring and fall season.

To reduce one's exposure to indoor dust, it would be better to keep the humidifier turned on, wherein the humidity of the house can be maintained to below 55 percent. On a regular basis, one should use the HEPA filter vacuum cleaner and also cover up the mattresses and pillows with dust mite-proof covers.

It has been observed that allergies can also stay all year round, especially when the allergy is due to mold and dust. Mold and dust allergies do not flare-up on a specific season since they can cause allergic reactions throughout the year. This time of the year, trees also have the potential of triggering the symptoms of allergy. Particularly in the northeast region, one can notice tree pollen in the air during the early days of February. The trees that often lead to allergies would include olive, pecan, catalpa, hickory, walnut, and elm. The allergic reaction caused by tree pollen is quite similar to the symptoms that arise during spring. A few of the symptoms include watery and itchy eyes, nasal congestion, and sudden bouts of sneezing.

During the month of March, the tree pollen volume is high since it is the time that marks the onset of spring season. For those who suffer from tree pollen allergy, the month of March would become really tough since this is the time when the trees, pollens, and grass start to come out. For individuals suffering from spring allergies, it is very important to keep in check the pollen count in their area before stepping out or else it can worsen the condition. If the pollen count increases and the individual steps out without proper cover, then it can worsen the symptoms of allergy. On a timely basis, you can check the pollen count at the National Allergy Bureau.

April is a month of spring allergies. The showers do get the blooms along with the flowers, but it would also cause irritation for individuals who are allergic to pollen. Flowers and their pollen would mean trouble for people suffering from spring allergies.

In certain countries, during the month of April, there can also be an emergence of grass pollen. Hence, too much pollen that arises from grass and flowers can really be annoying for those individuals who suffer from spring allergies. Extra care should be taken all this while.

Although tree pollen starts in the month of February, it can last the entire month of May as well. This would mean bad news for individuals suffering from spring allergies since they would need to struggle for an entire period of four months. In certain parts of the country, there can be chances that grass pollen can also emerge.

In many areas, the month of June is known to be the main month of grass pollen season, and it is possible that it can trigger already existing spring allergies. People tend to stay outdoors as days pass by since the temperature would start to rise. Individuals with spring allergies would experience both troublesome and allergy-free days. There will be a lot of things that would affect the level of grass pollen such as the rain and the amount of rain that falls, change in temperature, and the time of the day as well. Hence, one would need to keep watch and accordingly stay safe from allergy triggers.

This month brings along with it some sigh of relief for those suffering from spring allergies. Hence, it can be regarded as the month that can be managed pretty well. However, the downside is that July is the month of the onset of seed and fungus spores. For this reason, the discomfort of individuals who suffer from mold allergies would not end on this month. There may be chances that mold can grow on leaves that fall to the ground, grasses, grains, and piles of compost.

August is regarded as one of those prime months for individuals who suffer from summer allergies as well as mold and spores. It is the peak season, wherein such allergens are seen in higher amounts because of the hot and humid climate. To avoid worsening allergic reactions, it is advisable to stay indoors as much as possible, especially on days when the mold spore count is mostly high outside. One of the solutions to get rid of these mold spores is to run the air conditioning with the help of a HEPA filter. A cool temperature would help one to feel better from all the discomforting symptoms.

One of the common causes of fall allergies is the late summer or early fall ragweed. Ragweed pollen allergies, which start to appear in the fall season, can start as early as August and September, and can continue throughout the month of October, and possibly until the end of November.

Ragweed pollen grains are very light, so they tend to easily spread around. In certain cases, they can travel for miles, especially during windy days. It also depends on which area the individual resides. If your area is wetter and windier throughout the autumn season, then ragweed pollen seeds tend to easily spread. In certain cases, the symptoms tend to worsen if proper care is not taken.

By the time the month of October starts, fall allergies would ease out a bit. But if the climate is warmer, then there are chances that fall allergies can stay a bit longer throughout the month. Moreover, if there are frequent windy rains, then it can lead to an increase in the mold spores around. Thus, if you are allergic to mold spores, then it is better to buckle up and take extra care.

Usually, by mid-November, the ragweed pollen allergy in most areas tends to go down. However, if you are one of those suffering from fall allergies such as fungi or mold spores, then the symptoms would tend to stay on a bit longer until the season of late summer or early season of fall.

For individuals who have suffered constant bouts of allergic symptoms from the month of January until November, they would find some sort of relief from all of those discomforts. For individuals suffering from allergies, the month of November brings along with itself some sigh of relief, which is why it is regarded as one of the best months, especially for people having outdoor allergies. However, November can also be considered as a month for indoor allergies, which would arise due to indoor molds or pet dander.

Although the month of December is regarded as a beautiful season because of Christmas, the actual Christmas trees can lead to all those sneezing around. But the main concern is that the tree itself would not trigger the allergic reactions, but the microscopic mold spores, which are present on the tree branches.

Hence, if you are one of those people who love to have a real Christmas tree instead of the fake one, then it would be better to go buy those trees at least a week before you plan to get it decorated. You can keep it on an enclosed porch before getting it indoors. Ensure to give it a good shake to get rid of all those molds or spores. Just make sure to wear a mask while carrying out this activity. 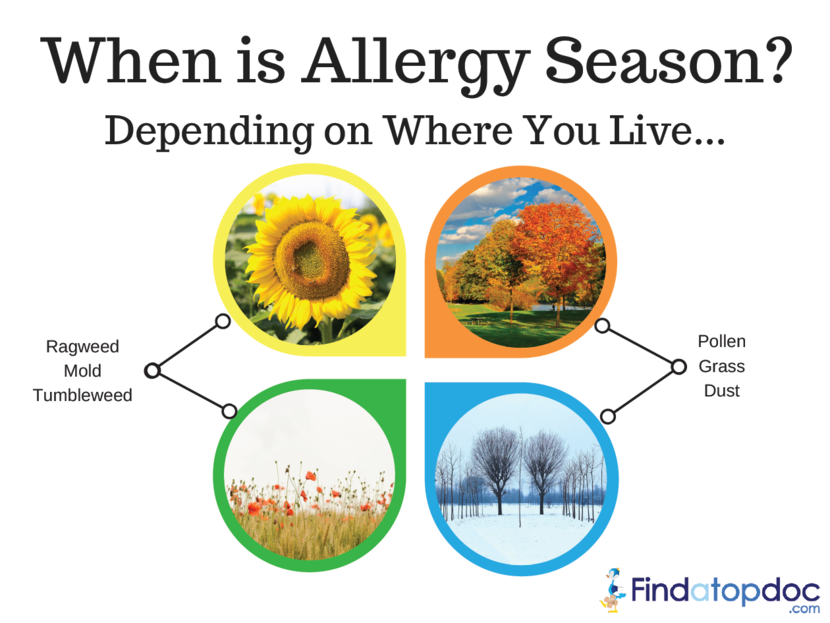 How to protect yourself from seasonal allergies?

I have food allergy.Will this allergy persist for the...

People Who Suffer From Allergies May Not be Able to...

Can cetrizine help in reducing fever?

Does the presence of animals increase the risk of allergies?

Why am I allergic to just soy milk and no other soy product?

Could I (16F) have enlarged adenoids?