Anatomy of the Scapula

The scapula is a triangular flat bone, which is also known as the shoulder blade. It lies in the upper back between the second and eighth rib. It connects the upper limb to the trunk and articulates with the humerus or upper arm bone. The articulation takes place at the glenohumeral joint. It also articulates with the clavicle at the acromioclavicular joint. The scapula provides many attachment sites for the muscles.

The scapula, due to its flat nature, has three surfaces, three angles (upper, bottom, and lateral), and three borders (superior, lateral, and medial).

Why am I having trouble smoking?

Surfaces of the Scapula

This surface faces the humerus. The bony landmarks are:

This surface faces outwards. The bony landmarks are: 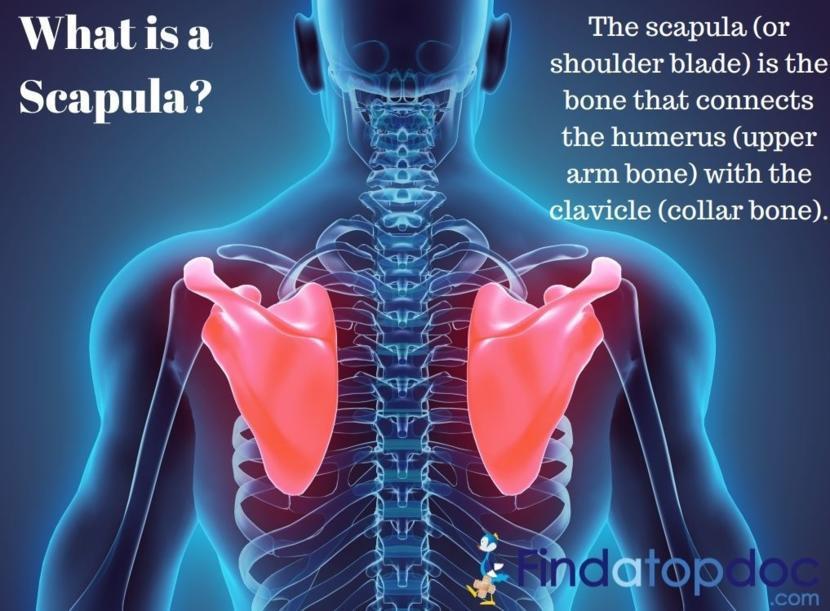 Function of the Scapula

Faulty foundation causes problems for the rest of the related areas, whereas a solid foundation provides a strong support and is an important feature of the structure. In the same way, the shoulder blade or scapula provides a proper foundation for the shoulder joint and overall shoulder health.

The scapula attaches the upper arm and upper back muscles, which helps raise the arms and shoulders, as well as bend the neck backward or sideways. Such connection also stabilizes the arm. The scapula, clavicle, and humerus are interconnected through a series of muscles, tendons, and ligaments. Altogether, they make up the shoulder.

Below are the movements of the scapula and the names of muscles that provide movements:

Forward rotation helps turn the glenoid cavity upward. This allows raising the arm above the head. Backward rotation is a return to the original position. It gradually relaxes the forward rotator muscles, but this movement is produced actively.

The scapula is protected by a complex system of surrounding muscles. Hence, extreme force is needed to fracture it. Scapular fracture is most frequently observed in young men. Less than 1 percent of broken bones belong to this case. Many cases of scapular fractures can be treated without any surgery.

The parts of the scapula that might get fractured are:

Fractures may be vertical, horizontal, or comminuted.

Type I fracture is difficult to examine because of the thick muscle and pain. This type of fracture can be confirmed on an X-ray. An adducted shoulder and the mechanism of injury should indicate the possible fracture, which is confirmed by imaging tests. It can be managed conservatively and by using a sling on the injured site.

Type II fracture is a fracture of the acromion and coracoid process due to direct trauma. In acromial fractures, the patient experiences pain while flexing the elbow. In a coracoid fracture, the person flexes the elbow as a pain relief. Both can be managed conservatively.

Type III fracture is a fracture of the scapular neck or glenoid fossa. The patient experiences pain around the humeral head because fracture happens due to the lateral to medial rotation of the humeral head. Treatment involves immobilization of the arm using a sling on the injured site.

A scapular fracture can be due to injuries caused by a high-energy blunt trauma of motorcycle or motor vehicle collision, crushing injuries, or fall from a significant height.

The doctor evaluates the position and posture of the shoulder to determine the appropriate treatment. The doctor may treat any soft-tissue damage. In cases of severe injuries, a detailed physical examination may not be possible.

Doctors may suggest imaging tests such as X-ray of the shoulder and chest to help determine the severity of the scapular injury. A CT scan may also be suggested to provide a more detailed image.

A simple sling works for most types of fractures. The sling keeps the shoulder in place while the bone heals. It is removed as pain improves. The doctor may want the patient to try moving the shoulder within the first week of the injury. The reason is to minimize the stiffness of the shoulder and elbow. Until the entire shoulder is healed, passive exercises should be continued, which may take six months to one year.

The doctor may ask about one's medical history, general health, and symptoms. The doctor will also look for any injuries, weakness, or tightness near the shoulder and scapula. It can be done by the following ways:

Scapular assistance test (SAT) - As the patient elevates his or her arm, the doctor applies slight pressure to the scapula and move it upward. If the patients find that the symptoms are healing and there is an increase in the arc of motion, then it is a sign that the muscles are weak.

Scapular retraction test (SRT) - In this test, the doctor would push the extended arm down. This would be done by manually placing the scapula in a retracted position to ascertain the strength again.

Doctors would also suggest for an X-ray, MRI, or CT scan if they suspect any abnormalities of the scapula or an injury to another part of the shoulder.

1) Nonsteroidal anti-inflammatory drugs (NSAIDs) - NSAIDs such as ibuprofen and naproxen can help relieve swelling and pain.

2) Physical therapy - Physical therapists would provide certain exercise programs, which will completely focus on strengthening the muscles that stabilize the scapula. Such exercises would also enhance the stretching of tight muscles and limit the motion of the scapula.

Surgery is done in rare cases. If dyskinesis is due to a shoulder joint injury, then the doctor would recommend for surgery, which would then be followed by rehabilitation to restore the motion of the scapula.

Maintain a good posture at all times. Moreover, try to sit and stand properly. The shoulder blades should be pulled back together tightly and the elbows should be bent down and back.

If you are following a regular exercise pattern, then make sure to work on upper body strength and keep your shoulders balanced at all times.

Using a heating pad or soaking in a hot bath can help relieve discomforts.

Normally, the contraction and relaxation of the different muscles maintain the normal position of the scapula. In a winged scapula, it is observed that when one group of muscles is paralyzed and other muscles contract, the normal muscles tend to pull the scapula away from the chest wall. The shoulder blade in this condition protrudes outside instead of being flat against the back. This happens due to weak shoulder blade stabilizers, mostly serratus anterior, which is also known as the "punching muscle".

Since the condition is linked to poor posture, it is often regarded as a common dysfunction. The medial border of the scapula seems to be appearing as wing-like on the back. Damage or contusion of the shoulder's long thoracic nerve can be due to blunt trauma. It can lead to damage, weakness, or even paralysis of the anterior muscles in serious conditions, leading to winging of the shoulder blades.

A physical examination and review are usually done by a specialist doctor. The examination would reveal the angle of scapular winging with the motion of the shoulder. If the brachial plexus is involved, then the patient would show some weakness in the biceps and deltoid muscles.

An X-ray can rule out other associated conditions such as fractures or cancer.

To evaluate the cause of nerve injury leading to scapula winging, a CT scan and MRI of the cervical and thoracic spine can be performed. The doctor can also perform an electromyogram (EMG) testing to the affected nerves and muscles.

A simple but effective scapula protraction exercise is by punching a boxing bag. It directly targets the serratus anterior muscle. If the body does not respond to exercises, then professional advice should be sought. Treatment is mostly conservative.

If the above fails, then surgery may be required. Surgery is done to reposition the nerve if it is entrapped in scar tissue or pinched. A tendon transfer can also be done. There are two common procedures:

Will walking on a broken toe make it worse?

Should my mother continue her metformin?

Can the signs of aging really be reversed?

More from FindATopDoc on Scapula Injuries

How do you manage low blood sugar in public?

Bleeding with mucus after colonoscopy and polyp removal